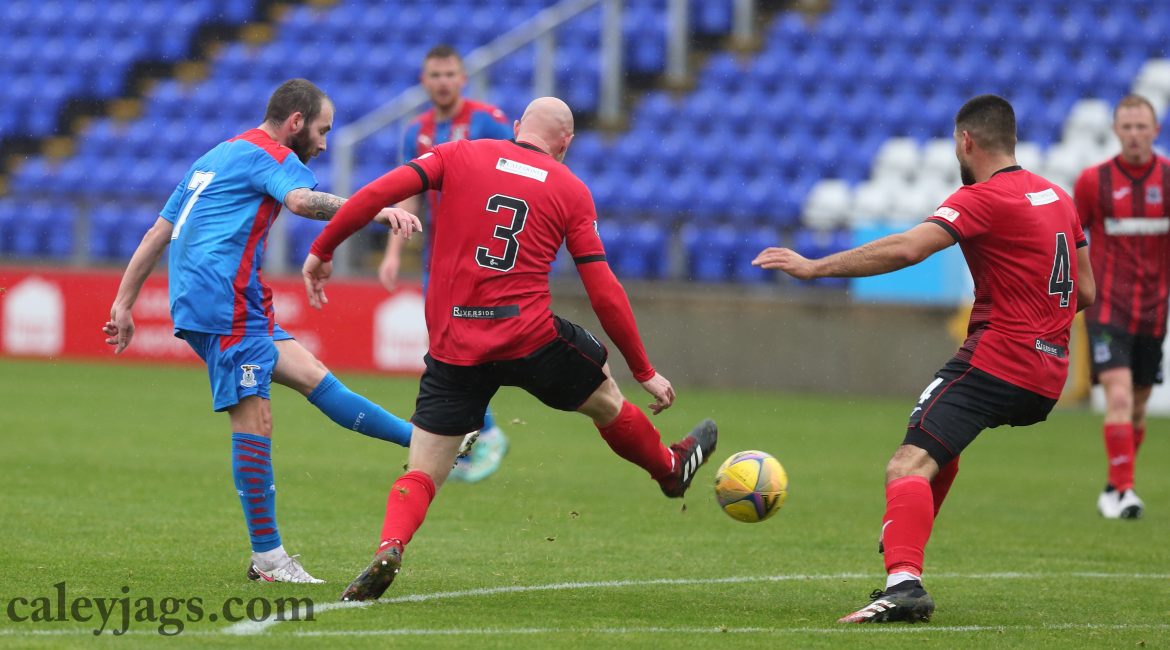 On a wet and rainy Saturday, ICTFC shared the spoils of a pre-season rematch against Elgin City at the Caledonian Stadium; the game ended 1-1.

Kane Hester opened the scoring for the visitors with a close strike in the second half and the Caley Jags responded with a neat finish about ten minutes later.

The first big chance of the game fell to the visitors in black. New ICTFC signing, Scott Allardice thought he could beat Russell Dingwall to a loose ball in the middle of the park, but slightly caught his man in wet conditions.

From a quick freekick, Aiden Sopel received the ball in the bottom left corner of the box and beat Lewis Toshney to create a chance on goal. With a tightening angle to bend his shot inside into the bottom right corner, Mark Ridgers did enough to pressure him and he couldn’t test the keeper, skewing his attempt wide of the mark.

Toshney came out worse from the incident, hobbling off early as a precaution. Ryan Fyffe replaced him as right back shortly afterwards.

ICT’s front three were asking their own questions of Elgin’s defence and almost opened proceedings at the 13th minute. Nikolay Todorov was released within the right hand side of the box, and his scooped cross to the middle was met by Keatings at the near post, but the midfielder couldn’t get enough contact on it to redirect his header back towards goal, curling the ball just wide.

As the half drew on, ICT were happy to have a lot of the ball through neat touches from Allardyce and Welsh, but they had to be patient to create their chances from a crowded midfield. Miles Storey received a ball on the right side from Welsh, looked up to find his options and dug out a cross that hit the body of Euan Spark. Calls for a handball were ignored by the referee.

The momentum continued midway through the first half, with Todorov and Keatings taking neat one-two touches to avoid their markers and then spreaded it wide left to Storey in lots of space. The Englishman cut inside and left an Elgin defender on the deck, and his cross to the back post was just headed out for a corner.

Moments later, Keatings and Storey combined again, with the latter playing a cushioned pass to the winger 12 yards from goal. His touch kept the ball away from a challenging defender but his shot smashed off a leg and out.

Another five minutes later, Miles Storey again capitalised on some Elgin players leaving space between the lines and cut inside for a shot from the left hand side. His shot didn’t dip down enough towards goal to test the keeper, however.

Despite the dominance by ICT on the ball, the visitors had a cluster of half chances to end the half and arguably the best opportunity to lead. The first chance came when Kane Hester managed to reach an over the shoulder pass from Osadolor down the right hand channel and tried to chip Ridgers on the edge of the box at a tight angle, but the keeper rushed to block the ball with his knees.

Brian Cameron had an opening to direct a shot on target from outside of the box from a loose ball, but his swept effort hardly picked up enough power to threaten. Elgin had the closest chance to open the scoring barely seconds later, with Dingwall dinking a cross to the middle of the box which was flicked by Hester, and Ridgers had to readjust to the ball as it slipped on a wet surface.

Shortly after the restart, ICT had another chance to test Thomas McHale in goal. Storey cut a cross from the left hand side and recent sub Shane Sutherland kept his half volley down to forced McHale into a palmed effort.

But Elgin quickly responded in kind a minute later. A cutback from the right hand side was buried by Hester from close range at the near post – 0-1 to the visitors. Elgin almost struck again shortly afterwards as Aiden Sopel disposssed Devine on the left hand channel and cut inside into open space to have a shot, but dragged it well wide.

Ryan Fyffe did well to beat his man on the right hand side and whipped in an excellent cross to the back post for Roddy MacGregor, who managed to get a shot on target but opted to side foot his effort on target; with McHale stopping it at the post.

Caley Thistle defender, Robbie Deas, would see a header nestle in the back of the net moments later but saw a flag before having a chance to celebrate. When Keatings tried to shape to shoot after cutting inside from a corner, the ball ricocheted to the defender to score and he cushioned it into the corner, only for it to be ruled offside.

John Robertson swapped Roddy for Daniel MacKay at the midway point of the half and he would soon have his chance to score, with Storey chopping inside from the right, scooping a cross into the middle, which fell for the young attacker to turn and shoot. But he got under the ball and swept off target.

Mackay would then try to return the favour to Storey, cutting a cute pass backwards in the box to allow him to shoot, only for it to go out for a corner on a deflection.

Fortune would favour the home side though, as the following corner squirmed through bodies to let Todorov prod home from around 6 yards from goal. It was an easy finish for the converted centre back, who continued his scoring run from his games against Nairn County and Elgin.

Elgin would be wondering how they didn’t score their second goal at the 70th minute, with Hester dispossessing Keatings and bombing down the left side into the box. The striker looked up and squared a pass to the back post that was met by Brian Cameron to tap in, but perhaps with the angle against him, he could only hit the shot off target from close.

With five minutes spare, Sean Welsh clipped a pass to Sutherland who found space inside the box. The striker rolled his marker and hit a firm right footed shot to the near post, forcing McHale into a smart save for a corner.

Elgin had their final say in the game, also testing the goalkeeper. Dingwall tried to set up a teammate with a looped pass to the back post but it was cleared back to him. The attacker cut onto his left foot, and his shot to the far post was just clawed away from goal by Ridgers on the dive – a great save by ICT’s number one.