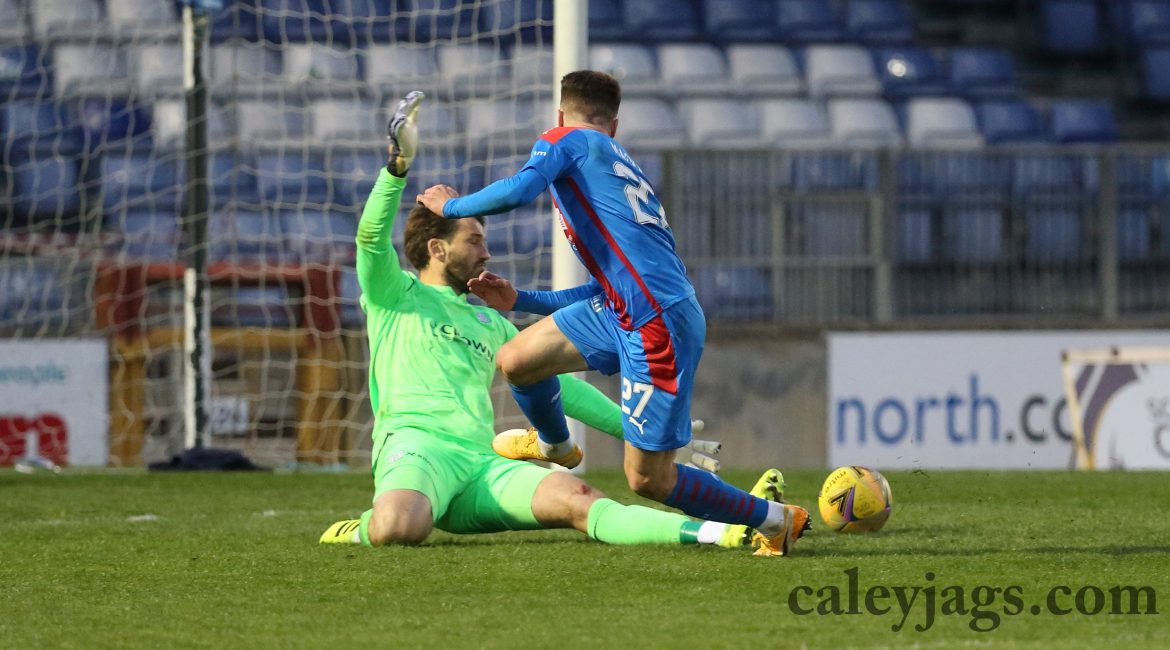 In a 1-1 draw on Tuesday, ICTFC and Dundee FC packed in thrills and spills during a hard fought second half at the Caledonian Stadium.

The Highlanders would have to finish the game two men short as both Brad Mckay and Scott Allardice were sent off for adjudged red card offences in the second half. ICT’s togetherness would be exemplified in their response to these incidents however, opening the scoreline via Daniel Mackay at the 84th minute despite the player shortages.

The Caley Jags fought valiantly to keep the visitors at bay but would have to settle for shared points as Lee Ashcroft rose to convert from a set piece. This result leaves ICTFC a point outside the playoff positions in the table with an away trip to Hearts next on the fixtures list.

The hosts started well with a nicked shot from Daniel Mackay at the 11th minute. The young winger beat a defender to a loose ball in the box to squeeze a stabbed effort, forcing Adam Legzdins to flick the attempt around his near post and out for a corner.

Shortly afterwards, Shane Sutherland seemed to have beaten the offside trap to latch onto a loose high ball one on one with the keeper, but was adjudged to have been just off by the linesman before he could round the shot stopper.

Ten minutes later, Scott Allan smartly flicked a ball over his shoulder on his left peg and found Todorov on the run in acres of space down the near side. The Bulgarian bet the offside trap and tried to find a man in the middle with a squared ball, with Sutherland eventually producing a snap shot on target through some bodies.

At the other end, Dundee almost capitalised in the ICT half as Declan McDaid beat Carson to a short pass from Ridgers on the left wing and tried to find Mullen with a low ball as he entered the box. Devine was on hand to mop up the pass and Ridgers was able to calm the situation down.

Striker Jonathan Afolabi tested Ridgers with a shot from outside the box moments later, but didn’t catch the ball enough to threaten the ICT goal with his scuffed effort. Up next was McDaid at the 34th minute for Dundee FC, who had a crack cutting inside from the right flank but was more likely to spook the camera person behind the goal with his rising effort.

The Caley Jags almost opened the score from a set piece as the first half closed, with the in-form Nikolay Todorov managing to meet Scott Allan’s out-swinging corner from the far side and guiding a curling header inches past the far post.

Robbie Deas found himself in relatively unknown territory shortly after the restart as the left back managed to slip past the defensive line to meet a prodded ball from Allan one on one against Legzdins. The fullback managed to test the keeper after settling himself, but couldn’t give his attempt enough lift to open the score.

At the other end, Mullen somehow beat the offside trap from a ball sent back into the box from a corner. His half volley was struck into the ground but Ridgers star jumped to block the shot at close range and send it away. With the goalkeeper recovering, substitute Charlie Adam tried to dink a cute lob into the top corner but his effort landed on the wrong side of the net.

The latter player would be involved in one of the first major incidents as the midfielder was adjudged to have been caught by Scott Allardice on the slide. The holding midfielder was issued a straight red card, with David Carson given a booking as a result of further protests in the aftermath.

The hosts would shortly pick themselves up and have a chance to test the keeper from an uncommon position, with the referee ruling that their keeper had collected a back pass and were awarded an indirect freekick inside the box. With previous taker and scorer against Greenock Morton Scott Allardice unable to repeat the act, Nikolay Todorov stepped up to have a go but unfortunately couldn’t sneak his hammered effort through the crowd of bodies.

Following the indirect freekick, Neil McCann tried to remedy the shape of the team in the middle by bringing on Roddy MacGregor and Miles Storey, with Scott Allan and Shane Sutherland making way.

But ten minutes later the Highlanders would have to adjust the team again, as Brad Mckay was ruled to have caught his man late on the right hand side and picked up a red card from referee Mike Roncone.

Further potential substitutions would have to be put on hold and in the meantime, Dundee FC would immediately take advantage of the extra space in the box, with substitute Jason Cummings flicking home the deep cross into the net from close range. The visitor’s jubilant celebrations would be cut short however, with the far side linesman calling it offside in the aftermath.

Nikolay Todorov would briefly cover Brad’s absence in defence before Neil McCann would make another tactical change, subbing on Cameron Harper to allow Deas to play in the middle alongside Danny Devine.

A lack of players wouldn’t stop the Caley Jags from going ahead against the odds. Daniel Mackay ghosted past the defense to reach a long ball behind the line and prodded home a trickling effort past the keeper to put the home side a goal up with only six minutes spare in normal time.

This manic end to the game wouldn’t stop as the pressure seemed to ramp up from the visiting side who tried to impose their numbers advantage. From the restart, Dundee FC answered ICTFC via a set piece, as Charlie Adam found Lee Ashcroft from a corner, rising highest to float a header away from a diving Mark Ridgers and into the net.

One last gamble from the home side in stoppage time didn’t bear fruit as ICTFC were kept at bay in the opponent’s corner area.