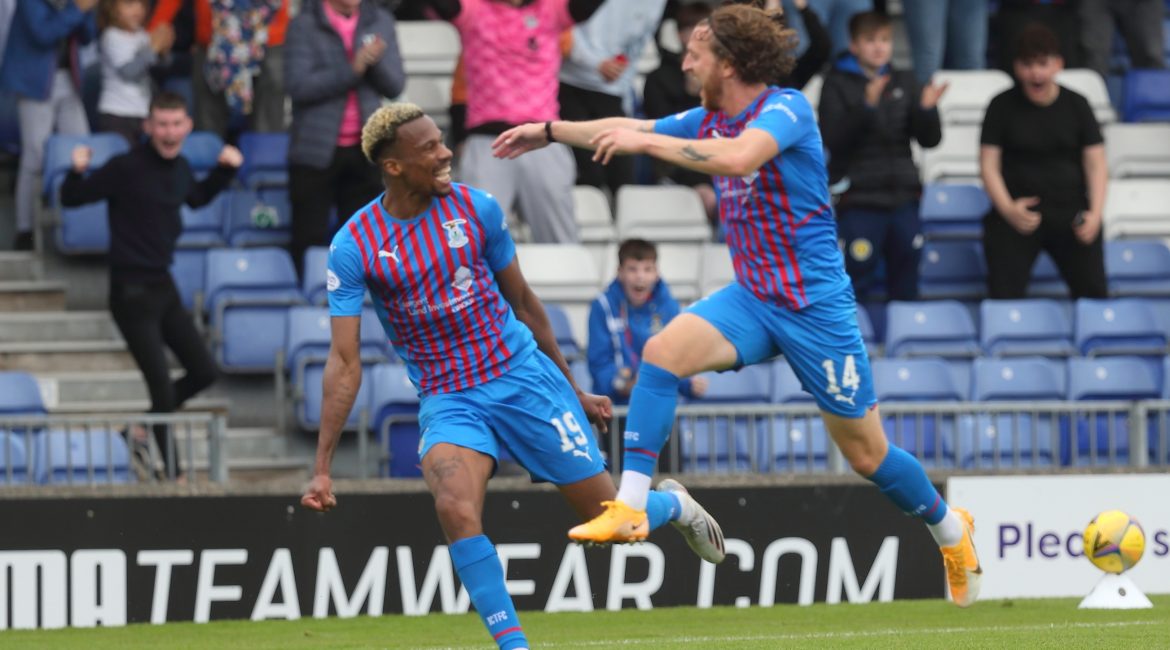 The Caley Jags kept their streak going with a third straight win in the cinch Scottish Championship against Ayr United at the Caledonian Stadium. Despite the dominance, a deflected Tom Walsh goal in the second half was the only thing to separate the sides.

The visitors arrived on the hunt for their first win of the domestic season, having picked up only one out of the possible six points available in the league. The Highlanders hoped to keep their 100% record without adjusting the winning formula too much, keeping the lineup largely untouched from their win against Raith Rovers, with Roddy MacGregor the only change. Tom Walsh also started against his old team for the first time on the wings.

Michael Gardyne was bright in the early minutes of the game, receiving a ball from the far side and jinking onto his right foot inside the box. He managed to squeeze his effort through the covering defender’s legs but it was dragged towards the wrong side of the near post’s netting.

Gardyne was involved again moments later as he intercepted a sloppy pass in the left half space of the pitch and drove forward with the ball. His smart cut back to Duku in the middle of the box was well paced but the striker couldn’t beat the keeper with his first time shot – with it landing at a good height for the shot stopper.

The opportunities kept on coming as the hosts were close again to finishing a well worked goal from a set piece. Gardyne played it short to Walsh from the near side corner and he found Shane Sutherland who couldn’t keep his first time shot down from the edge of the box.

At the 30th minute, Tom Walsh swept a floating cross from a corner that was met by Robbie Deas on the dive, the defender connected but his attempt curled a bit too much left to right and away from the right hand post.

The visitors had their moments to test Mark Ridgers throughout the half but the best chance fell at the 32nd minute. Immediately after Deas’ attempt, they broke forward and Jordan Houston’s drilled shot across goal went yards from the far post at a tight angle on the run. Ayr United players were just short of the ball to re-direct it in.

ICT had a great chance from the 18 yard line five minutes from the end of the half as Manny Duku rolled and wrestled his way towards the box and was hauled down by Markus Fjortoft. The Dutchman tried to clip his effort over the wall but could only get a corner as his effort defected out.

Just before the break, Roddy MacGregor fashioned something from nothing as he left the right back for dead with a deft touch and worked his way into the box. The midfielder cut it back to Walsh and his shot came off an Ayr United body, with player appeals for something more being waived away by Kevin Clancy.

Ayr United had the first chance of the second half as Adeloye broke the offside trap, found 20 running into space in the middle but couldn’t keep their sidefooted shot down; smashing the ball off the top of the stands.

The opening goal came via slightly fortunate circumstances for the home side. Shane Sutherland scooped a perfectly weighted ball for Duku to chase with no one defending and with the striker driven slightly wider than the goal, he tried to find Walsh breaking into the box with a low cross. McGinty was on hand to cut across and clear but he could only smash the ball off the body of Tom Walsh – the winger might not have seen it but he wouldn’t have cared as it deflected into the goal to open the scoring. It was his first goal since returning to the Highlanders.

Joe Chalmers had his chance to respond against his old side as he was found in space around the eight yard mark. The holding midfielder tried to guide the ball into the opposite corner on his left peg but with a tight target to find, he could only drag his effort inches wide of the post. Up at the other end, Walsh almost doubled his tally via a more conventional method as he lined up a shot but couldn’t quite find the far corner of the goal as he lost his balance.

Robbie Deas had his chance to get the second goal of the game as Walsh’s corner evaded a crowded box and landed at the defender’s feet at the back post. The fullback settled the ball down but scooped his half volley over the bar in the box on his weaker right leg.

Substitute Aaron Doran stung the gloves of the GK at the 44th minute as his driven effort from around 23 yards was a bit too hot to handle, with Albison needing two attempts to gather.

With seconds ticking down, Ayr United had one last chance to one home with a point as Charlie Albison launched an indirect freekick towards the ICT box. The initial pass was easily dealt with but Aaron Muirhead was on hand to collect the ball, only for the midifelder to sky his chance on the volley.

Up next is a top of the table clash away at Rugby Park against Kilmarnock FC. ICTFC’s next home match will be against Buckie Thistle on Saturday 4th September in the Challenge Cup.