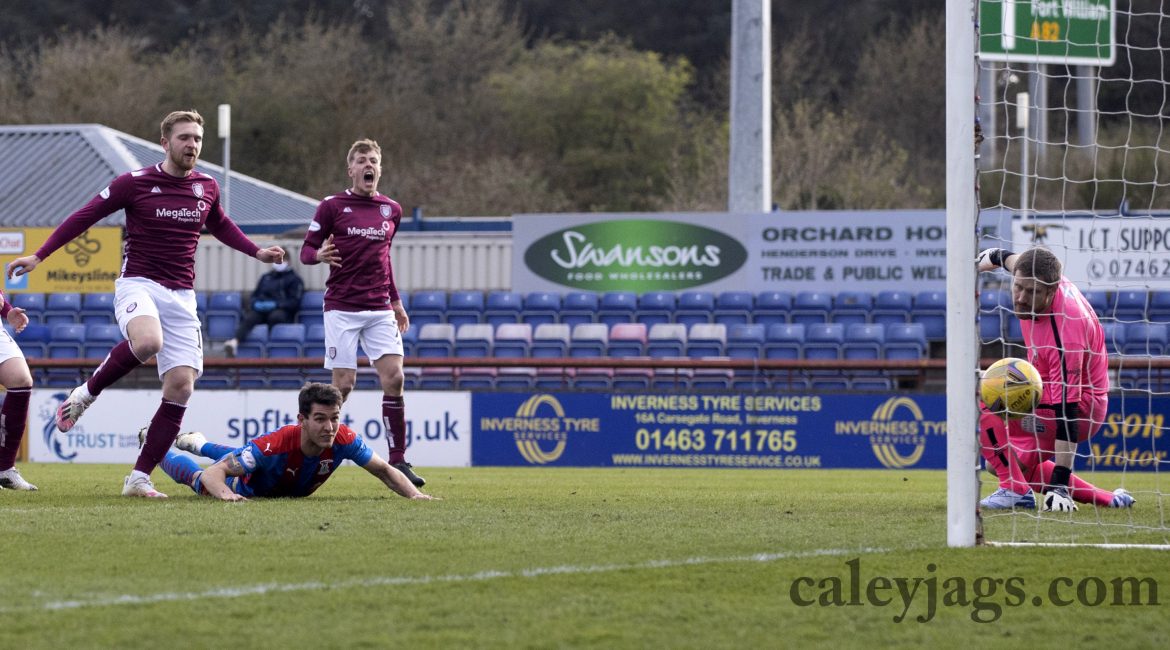 A diving Nikolay Todorov header in the second half was the only goal separating ICTFC and Arbroath FC in a tight affair at the Caledonian Stadium.

This 1-0 win extended the Caley Jags’ winning streak to four games and put the Highlanders back in the playoff mix. The game was also a chance for Scott Allan to make a second half debut hot off his loan signing. This loss for Dick Campbell’s Arbroath FC left the Lichties still in the relegation playoff spot.

The only change made to ICTFC’s starting lineup from their away game at Dunfermline was at the back, with Cameron Harper slotting in as LB and Robbie Deas taking up his usual spot at CB in place of Brad McKay. New loan signings Scott Allan and Arron Lyall from Hibernian FC and Rangers FC respectively, started on the bench.

Arbroath FC arrived in Inverness with four changes to the lineup from their last Championship draw against Hearts FC. David Gold lined up at right back in place of Carlo Pignatiello, with Lewis Moor and Michael McKenna starting as wide midfielders supporting Dale Hilson in a 4-4-2.

The first half in short was a close affair, with a series of indirect freekicks from Sean Welsh and Cameron Harper early into the game cleared by the visitors in their box. Arbroath FC tried to force a half chance at the 14th minute via Dale Hilton, who dragged an ambitious effort from the right hand side well past Ridgers’ far post.

ICTFC briefly had the ball in the net at the 23rd minute via a curling Harper freekick into the box. The cross was floated towards the back post by Danny Devine and tapped in by Roddy MacGregor from point blank range, but before he could celebrate the flag was raised on the far side for offside.

Roddy would later have another chance on goal when he spun into space in the centre of the park. He took a touch before trying a low effort on his left peg which went just past the right hand post.

The Caley Jags continued their fluid play as Shane Sutherland rolled his marker, looked up and played a great through ball for Daniel Mackay between the defensive line for him to chase down the left flank. His first time cross on his weak foot forced Hamilton to flick the ball over his own bar to prevent Todorov at the back post.

An outswinging corner from Arbroath FC just before the end of the half failed to separate the sides, despite Sean Welsh being on hand to clear a ball near his own goal line.

Early into the half, Neil McCann bolstered the attack with some quick substitutions, providing Scott Allan with his debut, fresh from his loan deal, and putting Miles Storey on the wings. Those substitutions seemed to edge the game in favour of the home side, with Scott Allan especially getting involved with give and goes and smart flicks to push ICTFC up the park.

And eventually that domination of the ball would put the Caley Jags ahead. Mackay was crumpled in the middle of the park 35 yards from goal, winning a freekick and Harper’s tantalising dead ball into the box was met by a diving Todorov on the shoulder of the defender. His headed finish was perfectly guided low and into the corner of the net, scoring his 6th goal of the season.

Up next was Scott Allan to test the goalkeeper at the 73rd minute to possibly extend the lead. Receiving the ball on the left wing, the playmaker used Harper as a decoy run to work his way inside for a low drive that Derek Gaston barely parried out for a corner.

The Highlanders threatened again from a set piece at the 86th minute. Nikolay Todorov was dragged down on the right flank, giving Sean Welsh an opportunity to sweep a ball into the box. Robbie Deas rose the highest and managed to direct his header roughly in the direction of the goal, but couldn’t keep the ball down; instead firing high above the bar from around the 10 yard mark.

With the game almost over and Todorov off the pitch in exchange for Kevin McHattie to shore up the defence, ICT almost added a second on the break.

Miles Storey took advantage of hesitant defending to go one on one with the keeper, winning a challenge for the ball from around the 45 yard mark. As he bared down on goal, the striker tried a last gasp lunge for the ball to beat Gaston but got too much of the shot stopper, picking up a booking in the process.