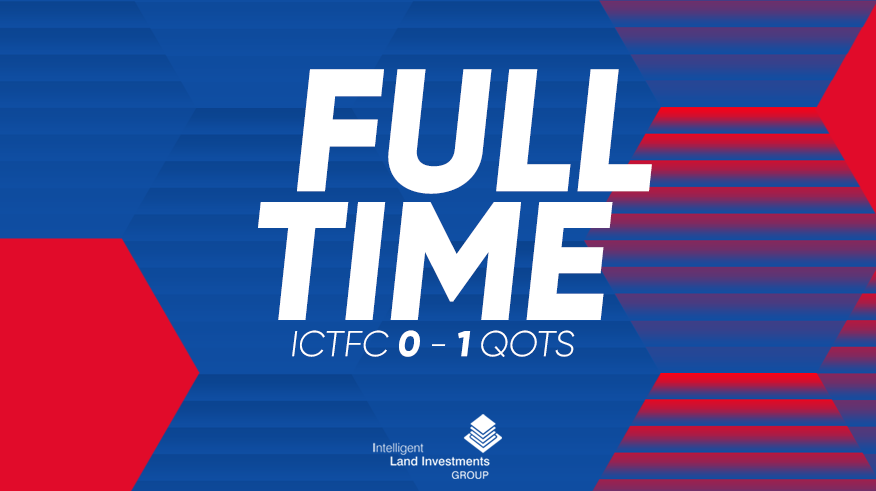 ICTFC were left frustrated in their first home game of 2021, losing to a close range goal from Queen Of The South’s Nortei Nortey.

Despite long periods of possessing the ball and hitting the crossbar from 25 yards via a curling Miles Storey attempt, the hosts were unable to provide a response.

Despite early possession skewing  heavily in favour of the Caley Jags, The Doonhammers threatened to score on the break from a cleared ICT corner.

James Keatings’ set piece initially caused problems in the box and in the scramble a yellow shirt fired the ball up the park, allowing speedy Isaiah Jones to chase with only one player back to help out. Cameron Harper eventually slowed him down and settled for a corner that was dealt with by Mark Ridgers.

A minute later at the other end of the park, Dan Mackay skipped past James Maxwell who lost his balance on the right flank, and smashed a cross that Rohan Ferguson had to flick away. The loose ball arrived in the right area for Shane Sutherland to volley the ball on the bounce but he dragged it just wide of the post, the best chance of the game so far. Up next was Daniel Mackay, who stung the palms of Ferguson from 25 yards with a mid-height effort.

James Keatings managed to deftly flick a pass wide to Storey using the outside of his foot on the next break forward, allowing the Englishman to eat up twenty yards down the left. As he reached the edge of the box, he squared to Sutherland in the middle who tried to sweep a shot on goal, but it was blocked by Maxwell on the slide.

25 minutes in Shane Sutherland spread the ball wide left to Storey in the channels, who faced up Gibson and cut a low cross into the centre of the box. Dan Mackay tried hitting it first time but scooped the ball over.

The visitor’s goal kick immediately made it back to ICTFC and Storey came incredibly close with a curving shot from range that rattled the crossbar, cutting in from the left. Keatings managed to shovel the rebound to the head of Daniel Mackay but his header was saved by Ferguson, who had then recovered.

Returning the favour from earlier in the game, Daniel Mackay bent an excellent cross to Storey in space inside the box. The striker settled himself with a touch and forced the keeper into a fingertip save.

The final attacking move for the hosts came within inches of a clear chance on goal as Scott Allardice picked out a pass between the lines that was just too long for Daniel Mackay to latch onto.

Mark Ridgers was forced into his first genuine save of the match 10 minutes into the second half. Stephen Dobbie managed to slide a cutback from a corner to Willie Gibson in the box, who tested the shotstopper with a comfortable low save to his right.

As the fullback struck it, he collided with Wallace Duffy and both required treatment afterwards, with visiting staff hopeful for a spot kick as part of the contact, but nothing was given. Both Duffy and Gibson were able to continue.

James Keatings had an opportunity to open the scoring from a deadball situation at the 62nd minute. The attacking midfielder struck a clean effort from around 30 yards and did enough to cause Rohan Ferguson panic, palming away the low shot out of danger.

Moments later, the visitor’s changes up front seemed to work in their favour as substitute Niyah Joseph contributed heavily to the only goal of the game.

The attacker intercepted a pass and drove into the ICT half with two defenders in his way. Nortei Nortey joined him in attack, offering him a run if needed and eventually it was taken, with the midfielder taking the pass in space with one touch before slotting it past Ridgers from close.

With the one goal separating the sides, the Caley Jags probed further to see if they could test the keeper. Scott Allardice drove around the box at the 69th minute until a window presented itself approximately 25 yards out. Scott seemed to catch it well but it took enough of a deflection off another blue shirt that it drifted just wide of the post.

ICT’s biggest and clearest chance to equalise came at the 80th minute. An excellent whipped cross from Harper near the touch line was met by the subbed in Nikolay Todorov in the box, but his header went down the throat of Rohan Ferguson instead of either side of the keeper.

As time started to wane, ICTFC continued to heap pressure on the visiting goal. Firstly Sutherland cut onto his left in the box to drive a shot on goal, only to see it blocked and then next came Scott Carson from the opposite side, causing havoc with a firm shot which again met a field of yellow shirts as QOTS tried to hold onto their lead.

Deep into added time, Todorov flicked on a ball for fellow sub Roddy MacGregor and his attempted half volley went just over under pressure from a defender. Todorov had the last shot from the home team, snatching at a half chance just right of the goal outside the box, driving a shot off target.