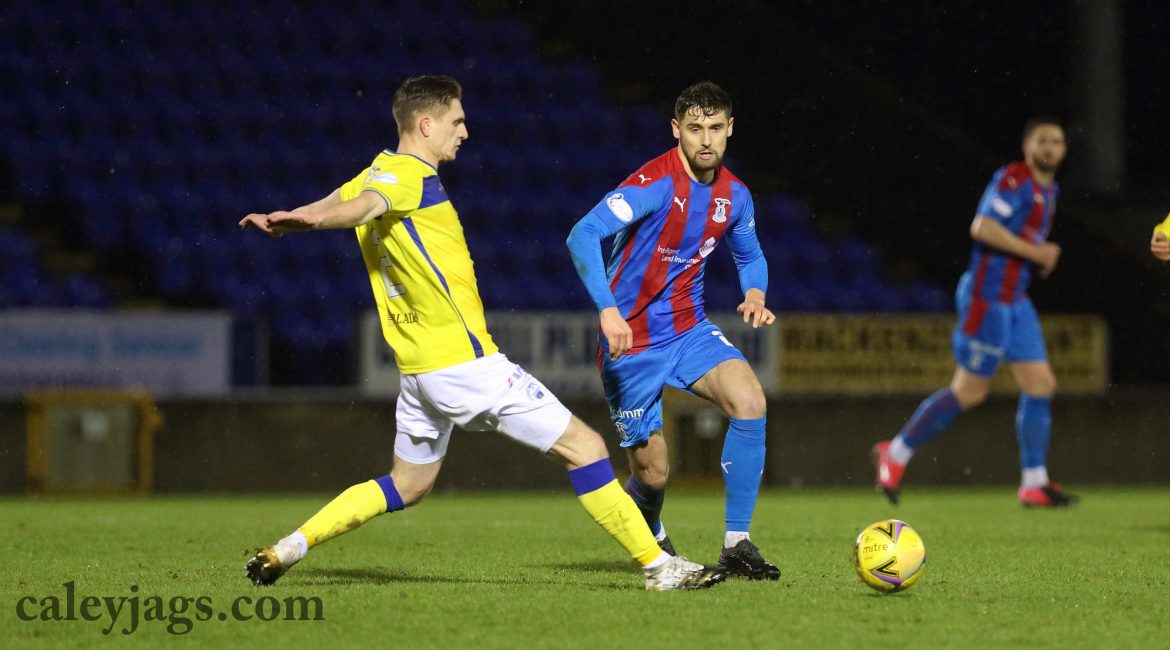 Despite a late rally from ICTFC, Greenock Morton returned home with the three points at the Caledonian Stadium, winning 0-1.

Under tricky weather conditions, Aidan Nisbitt’s effort inside the box in the second half was the only goal to separate the sides.

ICTFC’s next game is against the visiting Raith Rovers in a back to back tie against the Fifers.

Neil McCann had a mix of forced and unforced changes to the first team from the previous draw away at Alloa Athletic. Miles Storey, Sean Welsh and Cameron Harper didn’t start against the visiting Greenock Morton, with Daniel Devine, James Keatings and Scott Allardice taking their place.

ICTFC started the game brightly with neat interplay through the middle of the park. James Keatings evaded a challenge and managed to get a shot off from around 25 yards from goal.

His attempt was blocked by a yellow away shirt, with half hearted claims for handball following. The same promising flashes of smart football came a little later as Roddy MacGregor killed a ball dead and flicked it on to Keatings, who evaded tackles and spread the ball wide to Duffy down the flank. The fullback’s cross into the box disappointingly hit the side netting, ending a decent move.

The visitors had one of the best chances of the half via the work of winger, Craig McGuffie at the 22nd minute. The attacker made his way to the byline and dug out a floated ball for Kazaiah Sterling in the middle. The cross seemed to be inches short of where the striker wanted it in the six yard box, who stretched for it and ultimately flicked it just wide of the far post with his head.

ICT finally managed to test the keeper from a breakaway later on, with Shane Sutherland picking up a loose ball in his own half and looking further afield. Sutherland drove a skimming pass between the defenders for Roddy MacGrgeor to chase after. Fair credit to the young midfielder for getting to it on the slick turf, and getting a firm & low shot away on target for Aidan McAdams to parry out of danger.

Nikolay Todorov had a string of opportunities at the end of the half to capitalise on this solid end to the half. Firstly, James Keating’s ball to the inside right of the box allowed the striker to let off an effort, with it first getting blocked by the legs of a diving defender. The Bulgarian fought to gather the rebound under pressure and managed to let off another snapshot from a tight angle, this time clipping the outside top corner of the crossbar.

Then came another chance for the big target man before the break. Wallace Duffy managed to whip an excellent cross from the right hand side that caught the wind and evaded Fjørtoft’s head in the middle. Todorov stretched for it on the dive at the backpost but was booked for an apparent handball in his attempt to get on the end of it.

Nesbitt started the second half for the visitors with a half chance that Ridgers smothered at the first opportunity. The attacker flicked the ball down the line to Sterling, who initially lost his balance before eventually giving the ball back to Nesbitt. The attacker took a touch before hitting a fairly tame effort on goal to Ridgers’ left.

10 minutes into the half, Aidan Nesbitt would get the winner from a similar position to his previous attempt. Having received the ball in the box, he dummied to open up his shooting angle and slotted it into the opposite corner, away from a diving Ridgers.

With James Keatings subbed off early into the half, Shane Sutherland stepped up for corner taking duties at the 62nd minute. His whipped cross from the near side caused havoc in the box, with a combination of heads sending it high above the goal and forcing the GK to flap at it away, with it looking to dip underneath the crossbar.

As the game started to come to a close, Roddy MacGregor had a few opportunities to grab the equaliser. He first chested down a bouncing ball and managed to test McAdams from around 20 yards with a low shot, but while he managed to get it on target, he couldn’t catch the ball enough to force the goalkeeper into a tougher save.

Roddy came even closer in added time, rolling his marker on the edge of the box and catching a sweet half volley that clattered the crossbar. Todorov was on hand to hover up the rebound into the net but he was adjudged just offside.