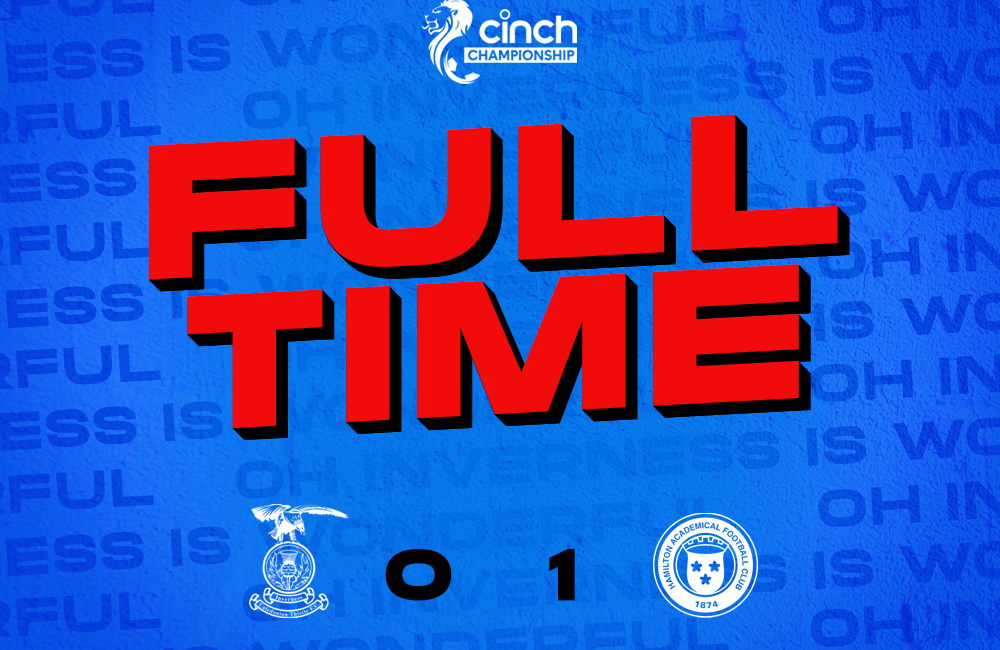 Caley Thistle fell to a narrow defeat against Hamilton Accies at the Caledonian Stadium as Andy Winter’s first half goal was enough for all three points.

Caley Thistle had two new fresh injury concerns with Wallace Duffy picking up an injury in the warm up and Daniel MacKay picking up a knee injury during the second-half.

Head Coach Billy Dodds originally named three changes with George Oakley, Aaron Doran and Lewis Hyde coming into the side for Billy Mckay, Roddy MacGregor and Scott Allardice. Wallace Duffy then picked up an injury in the warm up late on and was replaced by Max Ram in the starting eleven.

In a tight opening exchange, Aaron Doran saw his effort from distance go wide of the mark after 10 minutes.

Hamilton took the lead after 22 minutes, it was good work by Andy Ryan down the left side as his cross found Andy Winter in the box and he slotted the ball past Mark Ridgers from inside the box.

Caley Thistle looked for an instant response as Zak Delaney went on a great run down the left side and drove into the box but his shot was held by Ryan Fulton.

Cameron Harper’s corner just before the break found Max Ram in the box but his header was held by Accies keeper Ryan Fulton.

In the second-half, George Oakley went close as he pulled an effort wide after meeting Steven Boyd’s corner in the box.

After 67 minutes, Daniel MacKay was forced off with a knee injury after bursting away on the counter attack and he was replaced by Nathan Shaw.

With twenty minutes to go, Mark Ridgers was forced into a big save as Andy Winter was played in on goal and attempted a dinked finish.

Accies had a big chance to seal the win as Michael Doyle saw his header go just over after meeting a corner in the box.

With ten minutes left, Steven Boyd’s cross found Cameron Harper in the box but his low powerful shot was blocked on route to goal by Michael Doyle.

Caley Thistle will look to bounce back this Saturday as we face Raith Rovers at the Caledonian Stadium.