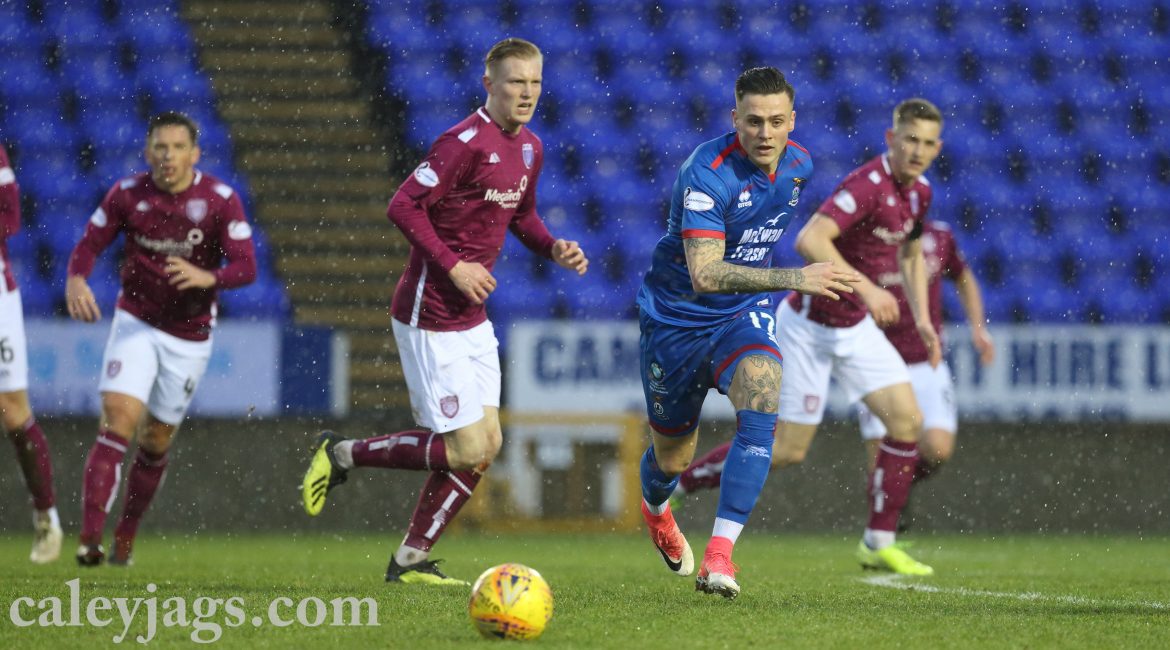 ICTFC finished the end of the year and the decade sitting second in the Labrokes Championship, but could not add extra padding against Arbroath to extend that gap; losing 0-1 at the Caledonian Stadium.

Following on from the 2-0 game against Dunfermline, Robbo made no the changes to the starting lineup, but Carl Tremarco and Brad Mckay were restored to the squad – recovering from their respective injuries – even though they could only make it to the bench.

For the bulk of the first half, it was the Caley Jags that seemed most likely to score.

From the break of a blocked Bobby Linn free-kick, Doran quickly freed Miles Storey down the right side who after eating up plenty of the pitch, threatened the defence with a near-killer cut back to Jordan White, only for it be desperately cleared away.

Shortly afterwards, White was there to rise highest to meet a scooped cross from the left hand side but couldn’t keep it down. From all sides and angles, ICT continued to probe and Arbroath almost gave away a direct freekick after a wild tackle hit David Carson from 20 yards out.

The referee played on and bodies were throwing themselves around to stave off the onslaught of crosses. Eventually the Red Lichties knocked it just clear to Carson on the edge of the box, who had the time to let the ball sit slightly before striking a firm half volley towards goal; failing to keep it low enough to threaten.

Coll Donaldson pushed forward with the ball from his own half to help out and almost swept an excellent cross turned shot from 40 yards for White to direct on goal, but Gaston rushed forward to gather in time.

His reactions would be further scrutinised via a smashed effort from White from around 25 yards away, just before the 30 minute mark. The big striker had some aid from perhaps a stray Arbroath arm to keep a high ball under control, to then swivel and hit a firm shot on target, only for Gaston to let it slip away as it was too hot to handle.

Just before the break, the visitors tested Ridgers reactions with perhaps the best chance of the half.

After Jordan White was swarmed by bodies and dispossessed on the left hand wing in his half, Miko Vertanen took a touch in the middle before deftly slipping in Bobby Linn diagonally in space on the left. He managed to sneak a low shot on target from an acute angle, forcing Ridgers into a sliding block with his legs. Shortly afterwards the ball was in the Alloa goal via James Keatings, but it was ruled out as White was caught offside.

This goalless score wouldn’t stay around for long after the half time break. Arbroath took the initiative and broke the deadlock shortly after kick-off. After an initial period of prssure from ICT, the visitors bombed up the pitch and quickly scored.

Bobby Linn had the space to cut across a low left footed cross to Donnelly from the left hand side, who from about two yards from goal easily prodded home to open the score. Barely two minutes later, Whatley almost extended the lead from the opposite flank, hitting a half volley that skidded past the far post. Any touch on the way across would have caused some trouble for Ridgers’ goal.

The following chances from either team would be far and few in the second half. After being allowed to cut onto his favoured left peg, James Keatings almost bent a delicious curled shot into the top corner, only for it to fly just wide of the mark at the 51st minute.

ICT even had the ball in the opposition net at the 61st minute, but the offside flag was raised.

Aaron Doran hit a deep cross to Shaun Rooney in space at the back post, who cushioned it back to centre for Miles Storey to sweep it in. But even before Storey could take a touch, the ref put a flag up to rule it out, adjudging Rooney to have drifted out of line when he was set free.

A loose ball from a freekick offered Storey the chance to rectify the offside goal with his left foot, but he failed to keep the shot down under pressure from many Arbroath shirts.

In the final ten minutes of added time, Mark Ridgers stayed busy and ensured that the scoreline wouldn’t be extended for the visitors. First denying a near post sidefooted effort from David Gold from close range, who kept down his first time shot from barely ten yards. And then secondly acrobatically tipping over a dipping header from Greig Spence from a corner only five miutes later, with the ball perhaps sneaking under the crossbar.

During the final seconds of the game Graham Beaton had the chance to award a spot kick to ICT.

Roddy MacGregor did well to take down a long ball from Jamie McCart but was crumpled just after he took his shot. The referee played on even through protests from blue shirts.