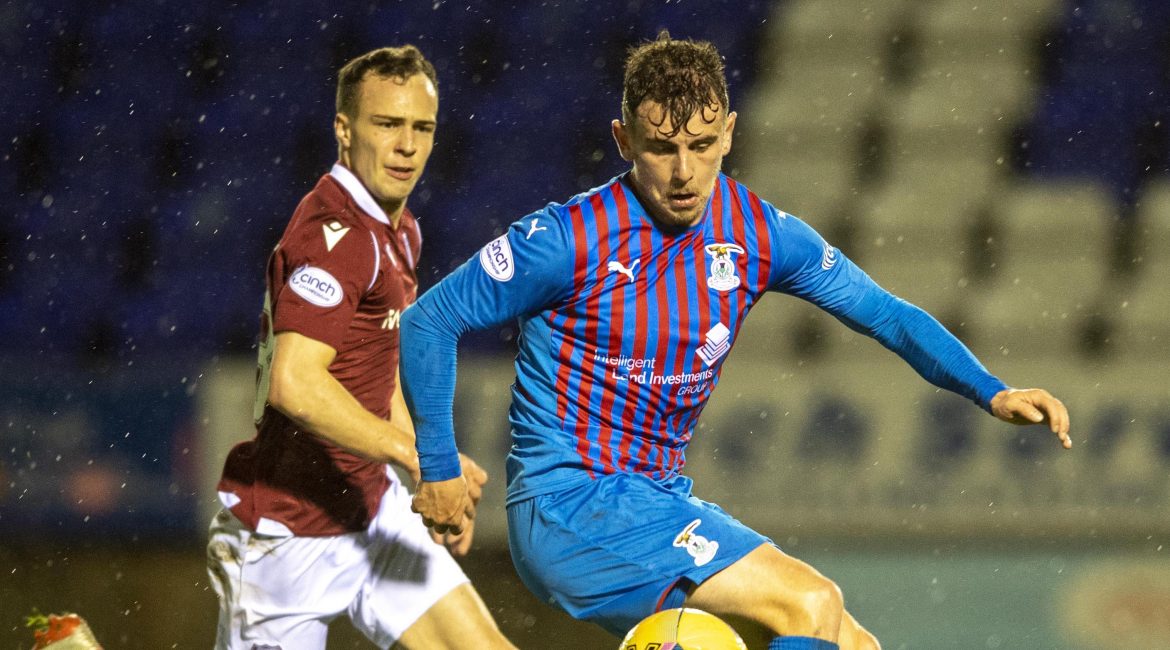 A goal from Arbroath FC’s Michael McKenna in the second half was the only thing separating ICTFC and the visitors at the Caledonian Stadium on Tuesday 26th October. This ends the Highlanders’ unbeaten streak at home but still keeps them in the hunt for promotion via the top spot; sharing the peak of the table with Kilmarnock FC.

It was 1st place versus 5th going in as each side hoped to finish the game with all three points, having both shared the spoils last weekend against Raith Rovers and Ayr United, respectively.

Reacting to the draw away, Billy Dodds made some changes to the starting lineup, bringing in Manny Duku, Tom Walsh and Aaron Doran in place of Michael Gardyne, Shane Sutherland and Wallace Duffy. Dick Campbell in exchange felt to only make one adjustment to the last starting 11 against Ayr United, swapping out Jason Thomson for Christopher Hamilton at right back.

The first move to open the scoring was made by the Caley Jags at the 13th minute. Tom Walsh clipped a looping through ball down the right hand side that seemed to be going out of play, but somehow Manny Duku reached it from around eight yards out and hooked the ball back towards goal on the bounce, knicking the top of the crossbar from an acute angle on its way out.

Eight minutes later, Aaron Doran came close from an indirect freekick. The winger whipped a tantalising cross from around 40 yards out on the left hand side and no player could get a touch on it to fire it home. Derek Gaston in goal was momentarily worried, however,  as the spin of the ball almost curled back inside the far right hand post; going just a yard wide of the mark.

Arbroath’s Luke Donelly tried to test Mark Ridgers at the 28th minute with a quick snapshot, having worked the ball from the left hand side onto his right peg. The winger didn’t get enough power on it though and it rolled gratefully into the hands of Ridgers, diving towards his right.

Just before the break, the Caley Jags continued to probe for the opener with a series of chances.

At the 36th minute, Tom Walsh found room to cut onto his left foot from the far side of the pitch and hit a low drive that glided across the slick turf and forced Gaston into a parry. Up next a minute later was Doran, who managed to beat the offside trap when chasing after a quick long ball from Walsh, before faking the ball onto his left and almost caressing a curling effort into the top corner from just inside the box – instead the ball went just off the mark.

Then came another great move across the park as Billy Mckay spread the ball wide to Walsh on the right hand side with a low pass and the winger almost convinced some fans that his mid-height drive had beaten Gaston to the near right hand post, but it brushed the wrong side of the net.

It was the visitors that would go ahead early into the second half. Scott Allardice gave away a freekick close to the near-side corner flag. Michael McKenna telegraphed a cross into the mixer but caught Ridgers out with a high curling shot that may have clipped the crossbar on its way in.

To turn the screw, Ricky Little almost added another goal from a corner three minutes later as the visitors picked up momentum, placing a firm header just under the bar that Ridgers did well to tip over.

Billy Dodds tried to rejig the formation by swapping out Manny Duku for Lewis Jamieson at the 62nd minute and switching from a 4-4-2 to a 3-4-1-2. And the new substitute almost connected with his partner to create an equaliser, playing a quick one two with Billy Mckay that was ruled off for offside as the former found his way in one on one.

ICT continued to press the issue at the 77th minute as Tom Walsh checked onto his left foot and curled a cross into the box that was glanced by Jamieson on target but didn’t get enough power on it to beat Gaston.

There may have been a reprieve at the 85th minute as Kirk Broadfoot held up a ball in the box during an ICT corner before going down due to contact but referee Craig Napier was not convinced and ruled a freekick in favour of Arbroath FC.

A last ditch freekick from Sean Welsh in the dying seconds landed favourably for Scott Allardice to take a hit but his effort only found a crowd of bodies in the box and deflected out of danger.

ICTFC are due next to face Partick Thistle FC away at Firhill Stadium on Saturday 30th October.