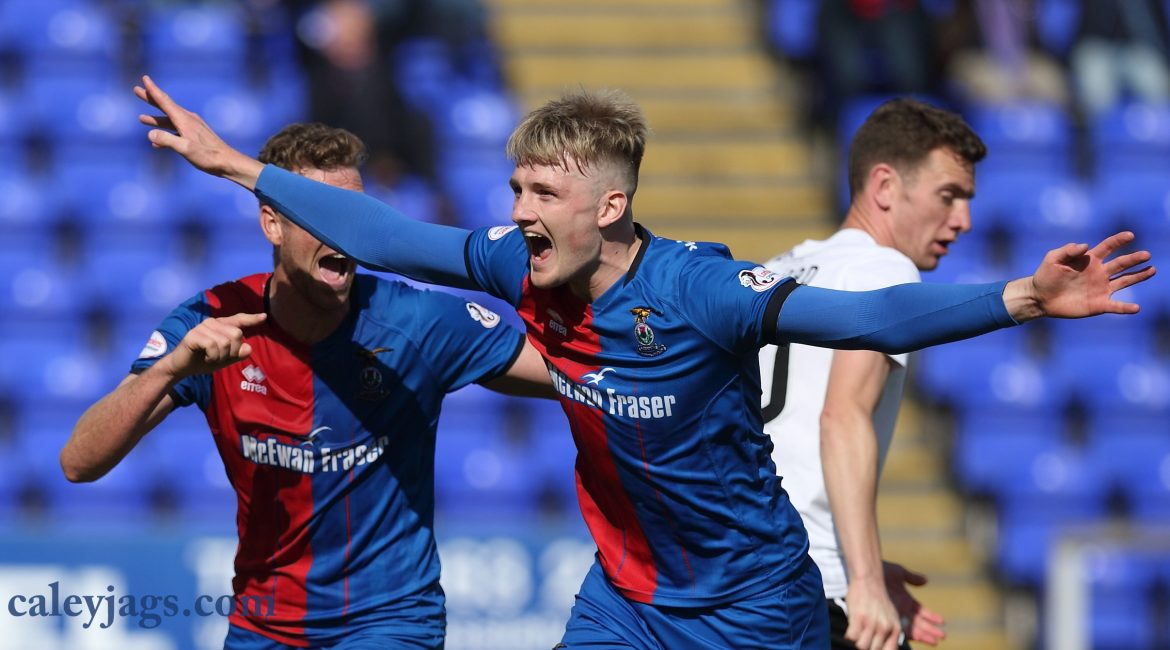 The Caley Jags progressed into the Semi-finals of the Scottish Premiership play-offs, drawing 1-1 on the day, but winning 4-2 on aggregate. Luke McGowan and Coll Donaldson provided the goals. It means that ICTFC will host Dundee United on Tuesday.

John Robertson made no changes from the first leg, with Carl Tremarco still not 100% and failing to make the bench. Robbo set up the Caley Jags in their usual 4-2-3-1, with a back four of Mckay, McCart, Donaldson, McHattie; a midfield pivot of Chalmers and Trafford; with Doran, Polworth and Walsh supplying White up top.

Ayr United started the game looking for an early goal to unsettle the hosts, passing the ball confidently and winning two corners.

The inform Lawrence Shankland was creating overloads with Declan McDaid supporting on the right hand side, and his cut back at the byline was snuffed out by Donaldson, who had an Ayr shirt sniffing at the back post.

With time, ICT started to get more involved with the game via the boot of Liam Polworth. The number 10 picked up the ball 25 yards out and threaded through Jordan White into the box at the 19th minute. White was slightly wider than he wished, but had the time to aim from a tight angle – his shot went out for a corner.

Almost immediately afterwards, Ayr United turned up the heat with the ball in the back of the net in response.

Shankland sprayed a long ball across the pitch from the middle and it was touched down by Declan McDaid on the right. He settled it and from the byline he snuck it across goal for Luke McCowan to fire home from around the six yard box. The youngster was a substitute in the first leg, but he took his chance to open the scoring in the starting line-up.

The first shot on target for ICTFC was via an inventive turn from the big man up top. Jordan White cushioned a high pass just outside the box and swivelled to hit it on the half volley with his right foot. It was low and goal-bound but Doohan was able to stoop down to collect.

After the break, ICT were forced into a change to their front three. Tom Walsh jumped for a ball earlier in the second half and landed awkwardly on his leg. After testing it for a period and starting to move freely, he was taken off 10 minutes later for Anthony McDonald.

Even though ICTFC had the lion’s share of the ball, it was Ayr United who seemed to be making the most of their chances. Firstly at the 52nd minute, Declan McDaid took a touch and on the volley tried to spank it from 20 yards – he cut across it and hit the ball high and wide.

20 minutes later, Michael Moffat cut inside from the left and passed to Crawford. The winger cut inside and dummied to created a window but he completely mishit the ball and fired wide when he tried to open his body up.

But through the continued possession, ICT managed to get a goal to secure the fixture.

Aaron Doran was fouled and from the left hand side Liam Polworth skimmed the ball over the heads of Ayr’s defence.

From point blank range, Coll Donaldson got the lightest touch to flick it into the bottom right corner – his first goal of the season. Almost immediately afterwards, Murdoch tested Ridgers from outside the box with a top corner bound shot, but Mark was there to palm it away.

ICT now host Dundee United on Tuesday in the first leg of the Championshp play-off semi finals. Tickets for this game are available now, more information can be found by clicking HERE