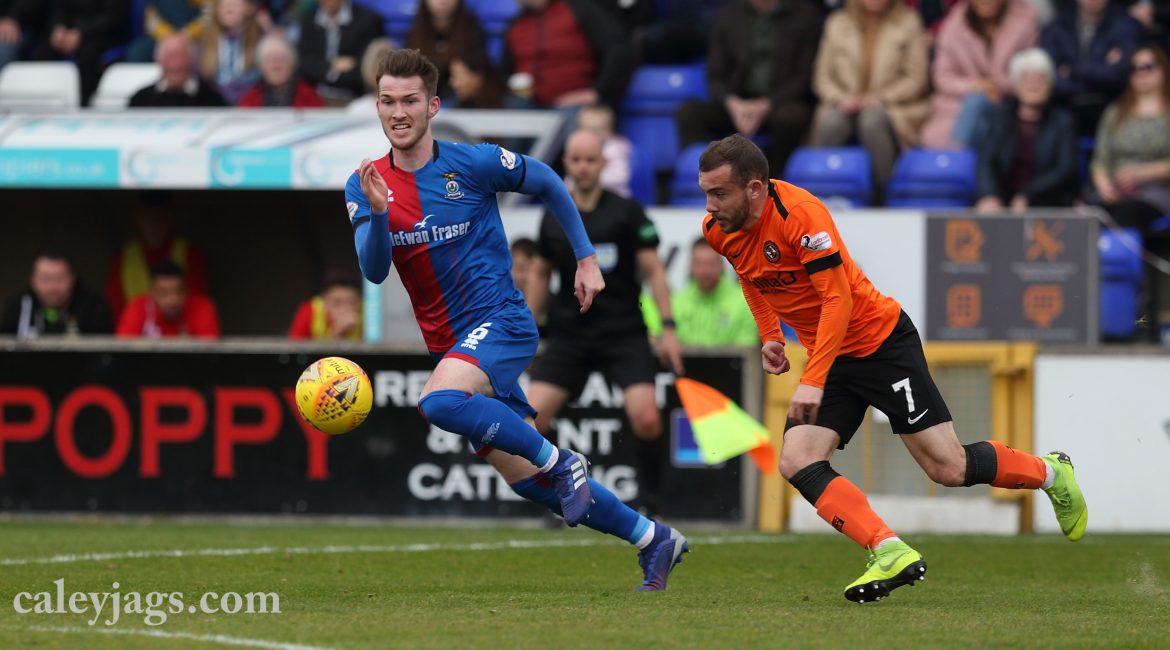 A well taken volley and a fortunate goal for Dundee United secured the three points at the Caledonian Stadium. A point would have secured a place in the playoffs for ICTFC, but through results of other teams, the Caley Jags secured their place, with mathematics ensuring a spot in the race for promotion.

The usual front three of Polworth, Doran and Walsh were restored to the starting line-up (with McDonald sitting on the bench after his great solo run against Morton) and were confidently passing the ball in the Dundee United half, trying to find spaces to attack.

Tom Walsh was the first to truly test United’s keeper, Benjamin Siegrist. The Tokyo Olympics is next year but Walsh had staked his claim for a spot with the gymnastic team, managing to test Siegrist with an acrobatic overhead kick from a White flick.

Though they had a lack of clear cut chances in the early stages, Dundee United had large portions of the ball but couldn’t quite figure out how to unlock the key to ICT’s defence. Safranko managed to chest a ball down from the right hand side to beat McCart, but his left footed strike wasn’t caught well and it skidded towards the goal, forcing Mackay to dive to touch it round. It was probably not on target, but Cammy didn’t couldn’t a chance on it.

The opposite could have been said of Tom Walsh’s next attempt on goal. Tom lined it up and cracked it from well over 30 yards. The ball was dipping under the crossbar into the top left before Siegrist tipped it over. It clearly caught him off guard but he did well to put a hand to it.

Pavol Safranko had already scored a goal against ICT this season in this year’s away 1-1 draw, but the first goal of the game was something different to his targetman displays. The big Slovak took control of a flick from Pawlett and on the volley curled the ball in with his left foot from the edge of the box. A shot out of nowhere but a well taken opening goal for the Tangerines.

Only moments later, ICT were close to an answer in response. Chalmers whipped one of his great deliveries from wide via a free lick and McCart met it, flicking the ball behind him and his effort barely missed the post.

At the 30th minute, Dundee United tested the sturdiness of the crossbar from the edge of the box. A Harkes corner was met by Paul Watson, who cannoned hits header off the cross bar.

Just before the break, ICT snatched at a chance. Liam Polworth dinked a ball through the defensive line on the edge of the box, but Tom Walsh swung at it and shanked it high and wide, it was the last chance of the first half.

United were quick to double their lead at the restart in perhaps controversial fashion. Paul McMullan took down a cross with a combination of his arm and his chest on the right and breezed past the first challenge. He dummied and then dinked Cammy with his left foot from close range – around 6 yards out. Caley shirts protested but Aitken wasn’t having any of it. ICT dusted themselves down and via Doran they had a quick response with an effort cleared off the line by Reynolds.

A spurt of substitutions were made to turn attempt to turn the tide for the Caley Jags at the 67th minute; Polworth and Walsh going off for the two scorers against Morton, McDonald and McCauley.

But Dundee United could have had another goal notched to add comfort to the score line, if it wasn’t for the effort of Shaun Rooney at the 74th minute. Jamie Robson managed to direct a half-volley under Mackay from inside the box and towards the back of the net, but Rooney was there to flick it off the line and out for ICTFC.

With the added confidence of his solo run, he Anthony McDonald did a close job to creating a scouting opportunity all by himself.

At the 82nd minute, McDonald was able to squeeze through the defence on the left hand side and after evading a tackle, tried to hit a ball across goal but it was narrowly past the post. Austin was there, but he wasn’t able to add the final touch to provide a consolation goal.

With that weak spot located for Dundee United, Caley Thistle pushed further but fortune turned against them, as they had to fight with ten men.

Brad McKay went to ground during the dying minutes in the opposition box and landed awkwardly on the way down, handling the ball and was sent off for a second yellow card. A harsh call but Brad was forced to walk down the tunnel slightly earlier than the rest.

Two late shots from White wasn’t enough to beat Siegrist and the game ended 0-2 to the visitors.