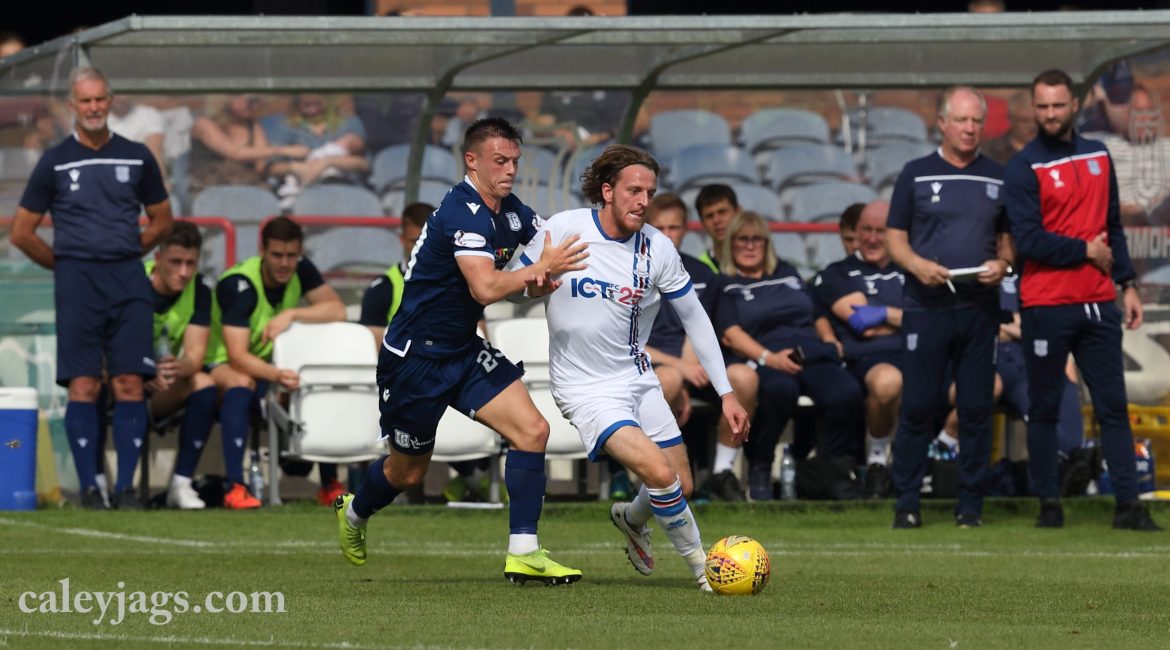 Caley Thistle drew 0-0 with Dundee in a tight encounter at Dens Park as both sides couldn’t be separated.

John Robertson made one change from the side which beat Arbroath two weeks ago as Miles Storey replaced Jordan White, who dropped to the bench.

Charlie Trafford missed out with a knee injury but Sean Welsh took his place on the bench after playing 90 minutes against Forres Mechanics in the North of Scotland Cup in midweek.

After just one minute on the clock, Miles Storey’s cross was headed over by James Keatings as his header looped onto the roof of the net.

Aaron Doran then forced a great save from Jack Hamilton after 8 minutes as the Irishman drove through the middle and unleashed a strike from 25 yards.

Dundee had their first chance after 17 minutes as Ridgers collected a powerful effort from Danny Johnson after he was set up by McGowan.

McGowan had a go from range after 30 minutes but his effort was well over the bar.

Coll Donaldson conceded a free-kick and was booked for a late challenge on Sean Byrne. McDaid then saw his free-kick pushed over the bar by Ridgers.

Kane Hemmings then had the final chance of the first half as he was slotted in by Sean Byrne but the Dundee striker dragged his effort inches wide of the post.

Caley Thistle started the second-half strongly, Tom Walsh saw an effort blocked by Marshall in the box as he was played in by Miles Storey.

Aaron Doran then saw an effort go just over the bar from about 20 yards as he aimed for the top corner.

Miles Storey found himself in on goal as McGhee misjudged the bounce of the ball but the Caley Thistle striker’s effort was inches wide.

Finlay Robertson was booked for a late challenge on Walsh, Keatings swung in the resulting free-kick as it finally fell to McCart, after Doran had a shot blocked, and the centre-back chipped one just wide.

Josh McPake was making his Dundee debut and he saw his effort blocked by Coll Donaldson in the box.

Caley Thistle then made a double change as Roddy MacGregor and Jordan White replaced Miles Storey and James Keatings.

In the 82nd minute, Hemmings headed over McDaid’s free-kick from about 6 yards.

Shaun Rooney went on a mazy run late on as he drove through the middle of the pitch and was taken out by Forster, the Dundee man was shown a yellow card. Jamie McCart took the resulting free-kick and saw his effort headed behind for a corner.

From the resulting corner, McCart went close as he connected with Doran’s ball but his header was inches wide.

Jamie McCart then found Todorov in the middle with a free-kick from the Caley Thistle half and the striker saw his effort deflected behind for a corner. The resulting corner from Doran found White in the middle but it was straight at Jack Hamilton.

The final chance of the match came in added time as Doran produced some great play down the wing as his cross was met by Jordan White in the middle and his header was inches wide.