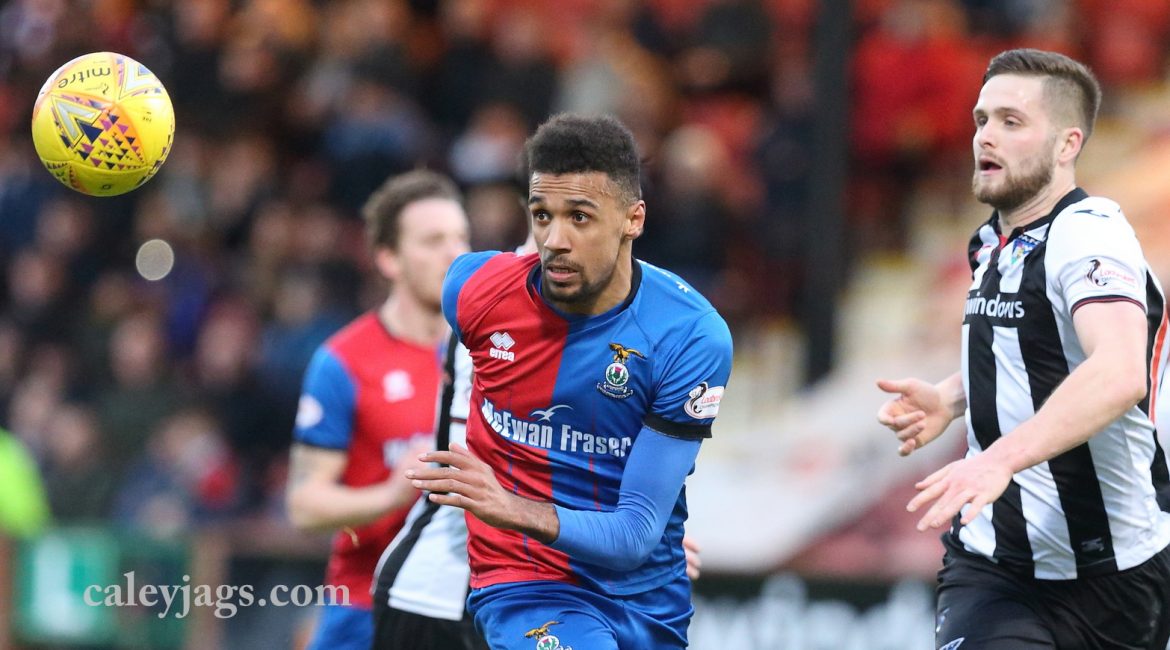 Nothing much could separate Dunfermline and ICTFC in a tight game where few chances could be created for either side. But a Joe Thomson effort from range gave the three points to the home team early on in the second half.

A last minute flurry of attempts wasn’t enough to fashion an equaliser for the Caley Jags as the Highlanders had to return home with nothing to show for it.

From the recent Scottish Cup tie against Ross County, John Robertson had to shuffle his deck  slightly in this latest visit to the East End Park. Liam Polworth was not included in the matchday squad due to a small injury and Sean Welsh and Coll Donaldson were dropped to the bench for fitness reasons.

In the early stages of the game, both sides struggled to set a tempo and allow themselves to play their natural playing style.

11 minutes into the game, Shaun Rooney did well to create a corner on the right hand side after neatly cushioning down a clearance. After a few attempts to get the ball into a stacked box, it was switched to Brad on the left wing, who cut inside and hit a low cross. Darren McCauley came very close to flicking it on but the cross bounced into Scully’s hands.

Dunfermline’s biggest threat came from Bruce Anderson, who was frequently used as an outball on the wings. The Aberdeen loanee intercepted an ICT pass and ran through into the box from the left hand side, but seemed to stall for too long as he waited for a passing option, eventually delivering a pass that Carl Tremarco cleared.

Home fans were convinced the referee Steven Kirkland should have awarded a spot kick in favour of Dunfermline at the 23rd minute. Another through-ball to Anderson was easily cut out by Jamie McCart but as the ball rolled out, the striker went to ground as it reached the left hand goal line. The referee wasn’t convinced and gave a goal-kick, to the home support’s disagreement.

In place of Liam Polworth, Darren McCauley had a chance to play on the left hand side of three attacking midfielders for ICTFC. But in quick succession starting from the 26th minute, he received a booking for stopping an attack from Aidan Connolly on the right hand touchline and then was given a verbal warning for another unlucky challenge on Connolly a few moments later.

Trying to change tactics, Anthony McDonald was subbed on for Darren McCauley at the 33rd minute.

The second half started brightly for the home team, as they opened the scoreline. Joe Thomson received the ball near the middle from 25 yards away, worked it out wide and attempted a shot from outside the box on the right. It was well struck but perhaps took a deflection as it seemed to catch Ridgers out, who could only palm it into the net. An unfortunate way to go behind.

They almost came close to notching a second at the 60th minute. Aidan Connolly was teed up by Blair near the edge of the box and managed to strike a firm half volley on goal, but it crashed off the crossbar instead.

With the introduction of Nathan Austin, ICT started to look more comfortable in the game. The new sub picked up the ball on the right hand side of the box and looked for his strike partner, Jordan White. He managed to swivel to work a shot on goal but couldn’t wrap his foot around it enough and it went wide.

Tom Walsh managed to ride a tackle and work the ball to the left hand side and managed to create a sweet left footed cross. White coudn’t reach it, but McDonald did at the backpost. The angle was too tight for the Hearts loanee to re-direct it towards goal.

The Caley Jags came even closer from a setpiece. Joe Chalmers took a freekick within 20 yards from goal on the right and he managed to get it up and over the wall, forcing Scully into a finger tip save.

The last chance fell to Brad Mckay, who collected a pass by White via a Walsh cross. With markers around him, the defender could only direct his effort with the outside of his right foot but he sent the ball over.