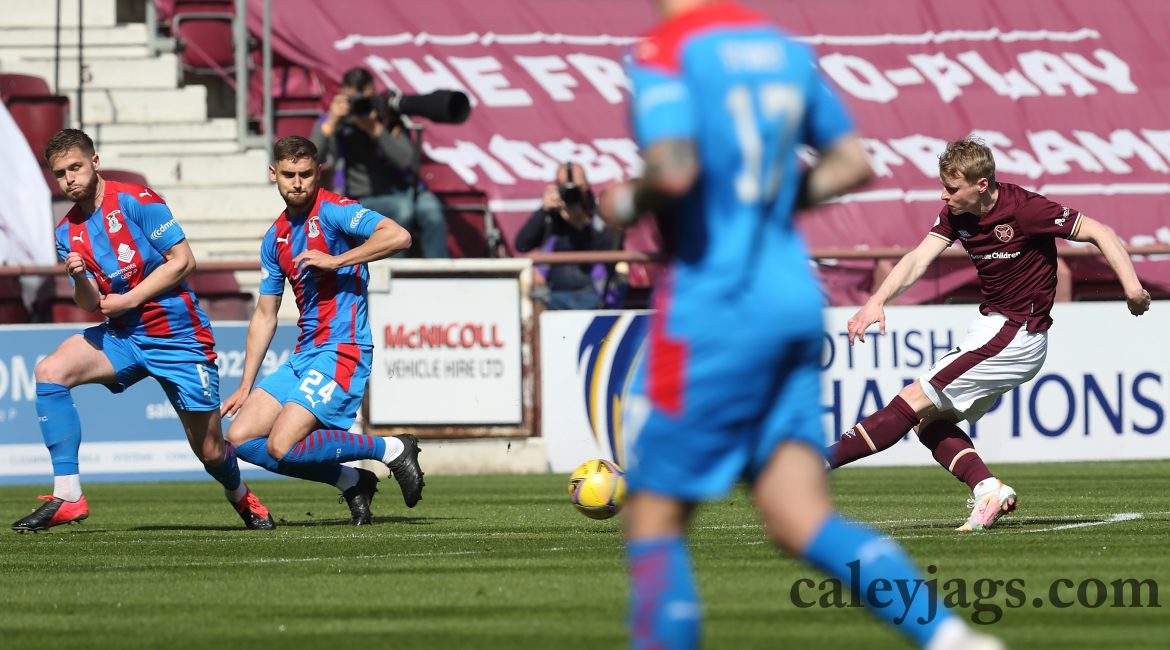 Caley Thistle fell to a 3-0 defeat against Hearts at Tynecastle thanks to a first half double from Gary Mackay-Steven and a goal from Aaron McEneff.

The result, coupled with wins for Dunfermline and Dundee in the other fixtures, means that Caley Thistle can no longer finish in the play-off positions.

Neil McCann made two changes to the side which drew with Dundee in midweek with Miles Storey and Cameron Harper replacing Shane Sutherland and Brad Mckay (suspended).

After having his red card against Dundee rescinded on Friday, Scott Allardice found Scott Allan on the edge of the box with a well worked corner in the opening minute but the Hibs loanee couldn’t keep his effort down as it went over the bar.

After 5 minutes, Gary Mackay-Steven got the opening goal of the match. He went on a great run down the left hand side and unleashed a strike from the edge of the box past Mark Ridgers.

After 9 minutes, Hearts doubled their lead. This time Aaron McEneff got on the scoresheet for the Jambos. Liam Boyce found McEneff just on the edge on the box and his effort took a deflection past Ridgers to double the hosts lead.

After 29 minutes, David Carson picked out Nikolay Todorov in the box with a header but his header went wide of the mark.

Hearts made it 3-0 after 30 minutes on the clock. There was a mix-up at the back between Deas and Ridgers after Gnanduillet’s flicked on header. Gary Mackay-Steven capitalised to nick and score for his second goal of the afternoon.

Five minutes before the break, Hearts were forced into a change as Peter Haring picked up an injury and was replaced by Andy Irving.

With the last action of the first half, McEneff looked for his second of the afternoon with an shot from 25 yards but Ridgers was equal to it.

At the break, Caley Thistle made one change as Roddy MacGregor replaced Scott Allardice.

Caley Thistle had an immediate chance after the break as Nikolay Todorov shot from a tight angle but Gordon was equal to it.

Cameron Harper then had a shot from range after 50 minutes but his effort was wide of the mark.

Neil McCann made our second change of the game after 56 minutes as Arron Lyall replaced Nikolay Todorov.

Scott Allan looked to get Caley Thistle back into it but his effort was deflected behind after 67 minutes.

After 69 minutes, Miles Storey saw his header come off the crossbar after meeting Scott Allan’s free-kick in the box but the linesman had his offside flag anyways.

Hearts then hit the woodwork themselves after 73 minutes as Boyce met Mackay-Steven’s cross in the middle of the box but his effort hit the left hand post.

Shane Sutherland replaced Miles Storey for the last 15 minutes of the match.

Scott Allan had another effort before the close of play as he went on a good run down the left but his low effort was held by Craig Gordon.

The match finished 3-0 and confirmed, coupled with results elsewhere, that Caley Thistle can no longer reach the play-off places.