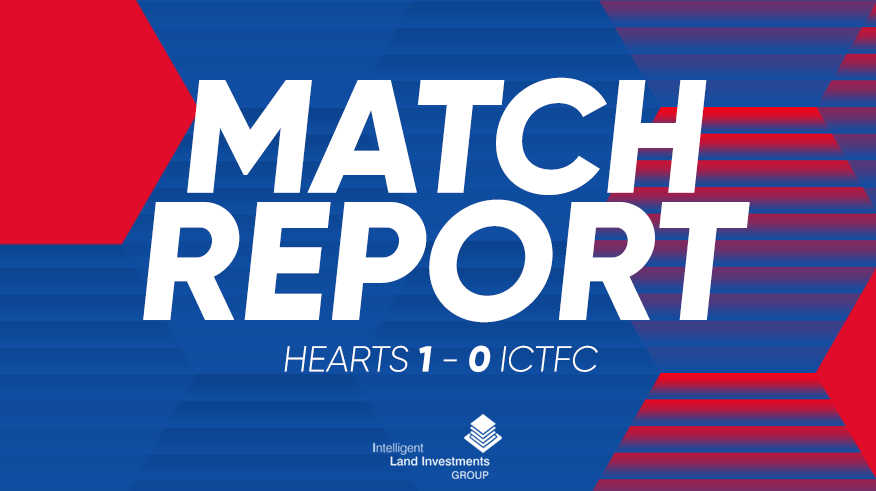 Hearts narrowly beat Caley Thistle 1-0 at Tynecastle Park thanks to a controversial Jamie Walker penalty in the second-half.

Hearts were awarded the penalty as Ginnelly’s shot hit Harper from close range and the referee judged it to be handball but the replays showed it to be a harsh call.

Seven Academy Graduates made the squad with Ryan Fyffe, Lewis Hyde, Shane Harkness were among the subs.

The game started quickly as Ridgers had to be alert to produce a fine double save as he denied Craig Wighton from close range.

The Hearts keeper Craig Gordon then produced a fine save of his own after 5 minutes on the clock. Shane Sutherland picked out Daniel MacKay in the box but his header from about 8 yards was somehow kept out by Gordon.

With twenty minutes on the clock, Ridgers had to be alert to save Josh Ginnelly’s shot after he cut inside on the right.

Robbie Deas had a big chance to open the scoring just before the break, a corner from Scott Allardice found him at the back-post but his effort was just wide.

On the stroke of half-time, Shane Sutherland went down with a hamstring issue and had to be replaced by Nikolay Todorov.

The first chance of the second-half fell to Steven Naismith but the Hearts attacker saw his effort blocked by Robbie Deas.

After 54 minutes, Ridgers had to be alert as he turned behind Jamie Brandon’s powerful close range effort behind.

After the hour mark, Hearts were awarded a penalty as Ginnelly’s shot hit Harper from close range and the referee judged it to be handball but the replays showed it to be a harsh call.

Jamie Walker stepped up to take the penalty and put it in the bottom corner to make it 1-0.

Caley Thistle looked for an immediate response and Miles Storey cut inside but his effort was deflected over for a corner but Hearts got it clear.

Nikolay Todorov had a couple of chances before the end of the game.

After 81 minutes, a straight ball through found Todorov through the middle but he blasted his effort over.

The striker had another chance three minutes later as he met Storey’s dinked cross at the back-post but sliced his volley wide.