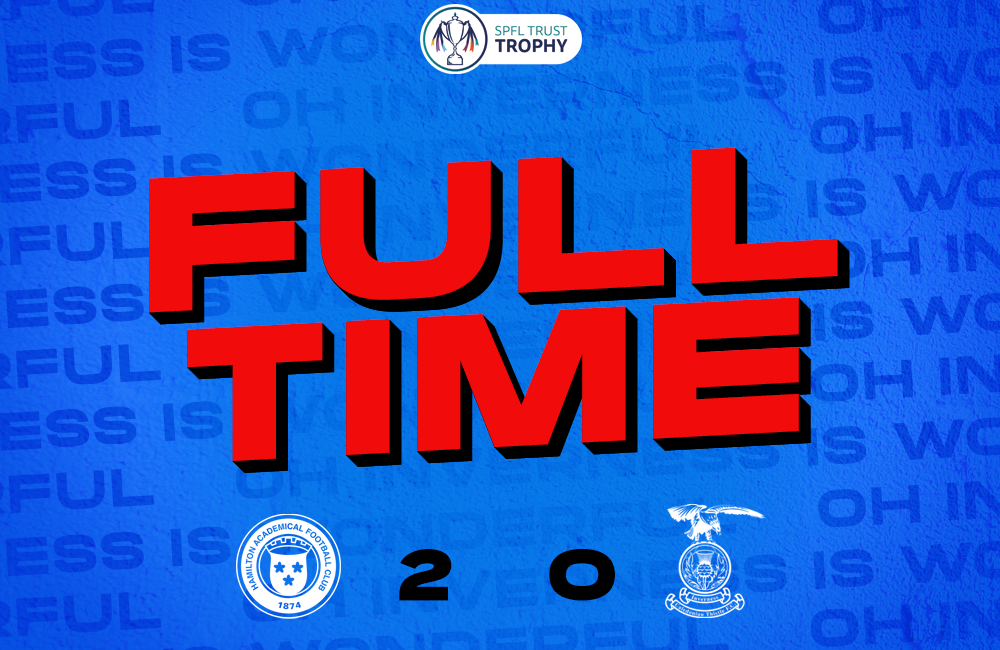 Caley Thistle were knocked out of the SPFL Trust Trophy following a 2-0 defeat against Hamilton Accies, with the Caley Jags fielding a team largely made up of the club’s Under 18 team. The young Caley Jags team gave a fantastic account of themselves and were unlucky not to get on the scoresheet.

Mark Ridgers and Ryan Barrett were the only players in the squad that weren’t teenagers. The rest of the squad was made up of the Caley Thistle under 18s which was decided because of the club’s current injury crisis with Ryan Esson and Scott Kellacher leading the team.

Hamilton took an early lead after 3 minutes. Lucas De Bolle was played through down the ICT left side and his cross wasn’t dealt with by the young Caley Thistle defence as the ball deflected off Sam Nixon and into his own net.

The young side responded well to going a goal down and almost had an equaliser through midfielder Keith Bray. The ball broke to the 16 year-old midfielder in the box, after Calum MacKay did well down the left to get the ball into the box, but his diving header was palmed wide by Accies keeper Jamie Smith.

After 8 minutes, Caley Thistle had another chance as striker Aaron Nicolson played Calum MacKay through on goal but his effort hit the side netting and went behind for an Accies goal kick.

The game then started to settle down. Accies went close to a second through Ryan One as his close range header went over the bar after 18 minutes. Andy Winter then saw his effort deflect behind for a corner for the home side, but ICT got the resulting corner clear.

With 25 minutes played, Caley Thistle got a good chance. A well worked corner saw Calum MacKay pick Aaron Nicolson out in the box but the striker dragged his effort wide.

Hamilton grabbed their second of the afternoon after 33 minutes. Andy Winter produced some good play down the Accies right and his low cross found Reegan Mimnaugh in the box for a tap in to make it 2-0.

Just before the break, the young Caley Thistle almost grabbed a goal back. Matthew Strachan’s cross found Aaron Nicolson in the box but his header was held by Jamie Smith.

At the other end, Mark Ridgers was forced into a good save to turn Gabe Forsyth’s shot wide.

The second-half started with a slower pace and the first real chance fell to Ryan One for Hamilton after the hour mark but his effort was parried wide by Mark Ridgers.

In the closing minutes, Mark Ridgers made way for Danny Gillan. Gillan was called into action as he denied Ryan One with a good save.