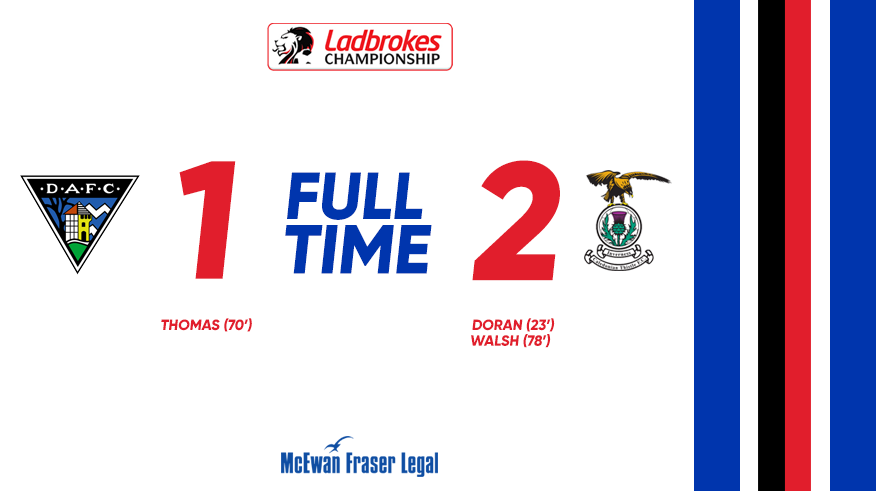 Tom Walsh came off the bench to score the winner against Dunfermline at East End Park as Caley Thistle beat the Pars 2-1.

Aaron Doran gave Inverness the lead in the first-half with a stunning free-kick but the Caley Jags were pegged back as Dom Thomas scored a thunderous strike but Walsh’s deflected effort earns the Caley Jags all three points.

John Robertson made three changes from the side which lost 2-1 to Dundee United on Friday, with Roddy MacGregor, Lewis Toshney and Aaron Doran coming into the side for James Keatings, Tom Walsh and Kevin McHattie. Caley Thistle captain Carl Tremarco was making his 200th appearance for the club.

The home side started brightly and Mark Ridgers was called into action early on as Afolabi saw his low cross palmed clear and James Vincent was on hand to clear away the rebound.

After 10 minutes on the clock, Kilmarnock loanee Dom Thomas saw his effort go just wide of the post.

Pars striker Kevin Nisbet was then presented with a big chance tow minutes later as he was found free in box by Ryan Dow with his cross but he could only head wide.

After 22 minutes, the Caley Jags had the lead. MacGregor was fouled on the edge of the box and Caley Thistle were give then free-kick, Aaron Doran stepped and fired his free-kick past Fon Williams via the underside of the bar.

Roddy MacGregor then had an opportunity of his own as he headed Carl Tremarco’s cross wide after 36 minutes.

In the final action of the first-half, Kyle Turner saw his effort from about 20 yards held by Mark Ridgers.

In the second-half, Inverness had a chance four minutes after the restart as Doran’s cross found White in the middle but his header looped onto the roof of the net.

After 51 minutes, Ridgers produced a great one handed stop to deny Dom Thomas as the Dunfermline midfielder unleashed a great striker from 25 yards, the rebound then fell to Ryan Dow but his effort was wide.

Just before the hour-mark, Turner picked out Afolabi with a long pass but the striker dragged his effort wide of the post and a minute later Nisbet found Turner on the edge of the box but Tremarco produced a fine block to deny the midfielder.

The home side did get level with 20 minutes remaining on the clock, Dom Thomas unleashed a thunderous strike from about 25 yards and into the roof of the net.

The Pars then had a chance a minute later though Danny Devine to take the lead but his header was wide.

Substitute Tom Walsh then was inches away from making it 2-1 to Inverness after 74 minutes as he cut inside from the left and saw his effort from the edge of the box cannon off the post.

Tom Walsh did restore Inverness’ lead though four minutes later, again the winger cut inside from the left and shot but this time his effort found the back of the net via a deflection from a Pars defender.

In the closing stages of the match, Jordan White saw his initial shot blocked and the rebound then fell to James Keatings on the volley but his effort was over.