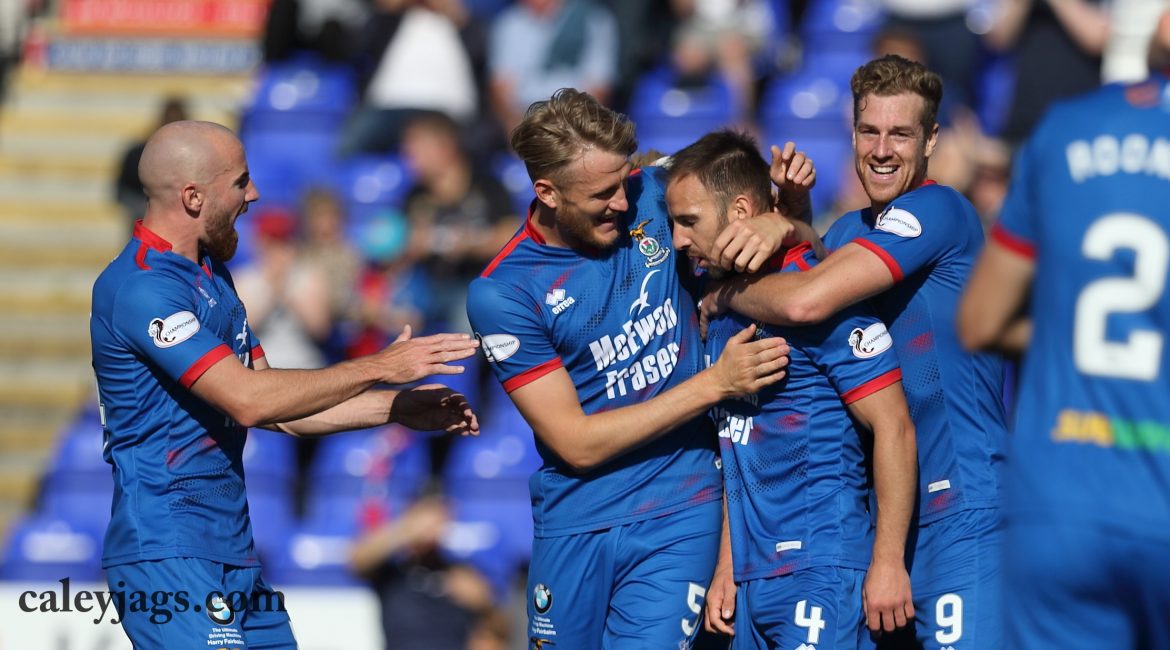 Inverness Caledonian Thistle made it four wins in a row in all competitions as they beat Queen of the South 2-0, thanks to first-half strikes from Sean Welsh and Tom Walsh.

John Robertson made one change to the side which beat Dunfermline 1-0 at East End Park last week, as Sean Welsh came into the side for David Carson. The game was Welsh’s first league start of the season, after coming on against Dunfermline last week to score the crucial winner from the penalty spot.

It was Welsh who opened the scoring after 16 minutes on the clock, White laid back a cross from Walsh on the right-hand side and the midfielder fired the ball low past McCrorie from 20 yards. A strike with real conviction to mark his first league start.

Queens showed their threat after 18 minutes as Fassial El Bakhtaoui broke clear but he put his effort wide of the post.

Only a minute later it was 2-0 to the Caley Jags, Tom Walsh was the scorer this time around, It was superb play from Rooney down the right as his cross found its way to Tom Walsh and finished superbly first time to make it 2-0 after 19 minutes.

After 31 minutes, Tom Walsh put a fantastic free-kick into the box as Donaldson was inches away from connecting with it. The resulting corner was worked to Aaron Doran and his cross found White in the middle but it was turned just over.

Miles Storey cut inside and shot from the edge of the box after 37 minutes but McCrorie collected it.

Walsh called McCrorie into action again a minute later, Doran’s corner caused problems in the Queens box and it came back out to Walsh, who hit it on the volley, but his effort was palmed clear by the Rangers loanee.

The final chance of the first-half was a free-kick by Sean Welsh which had to be parried behind by McCrorie for a corner.

Caley Thistle started the second-half quickly, as Walsh saw his effort blocked by Kilday straight after the re-start. The ball the broke to Welsh but fired his effort wide from range.

After 48 minutes, The Caley Jags had the crossbar shaking as Walsh’s corner was met by McCart in the middle but his header hit the top of the bar and was behind for a corner.

Jordan White could’ve made it 3-0 after 53 minutes, Sean Welsh’s effort from range was parried by McCrorie. The ball then broke to White from about 6 yards out but he couldn’t convert his effort.

After 65 minutes, Miles Storey was replaced by Nikolay Todorov

White was inches away from making it 3-0 with 13 minutes left of the match as Todorov played Walsh in down the right hand side, his cross was just missed by the Caley Thistle number nine in the box.

McCrorie was called into action a minute later as he tipped Doran’s effort over the bar and behind for corner.