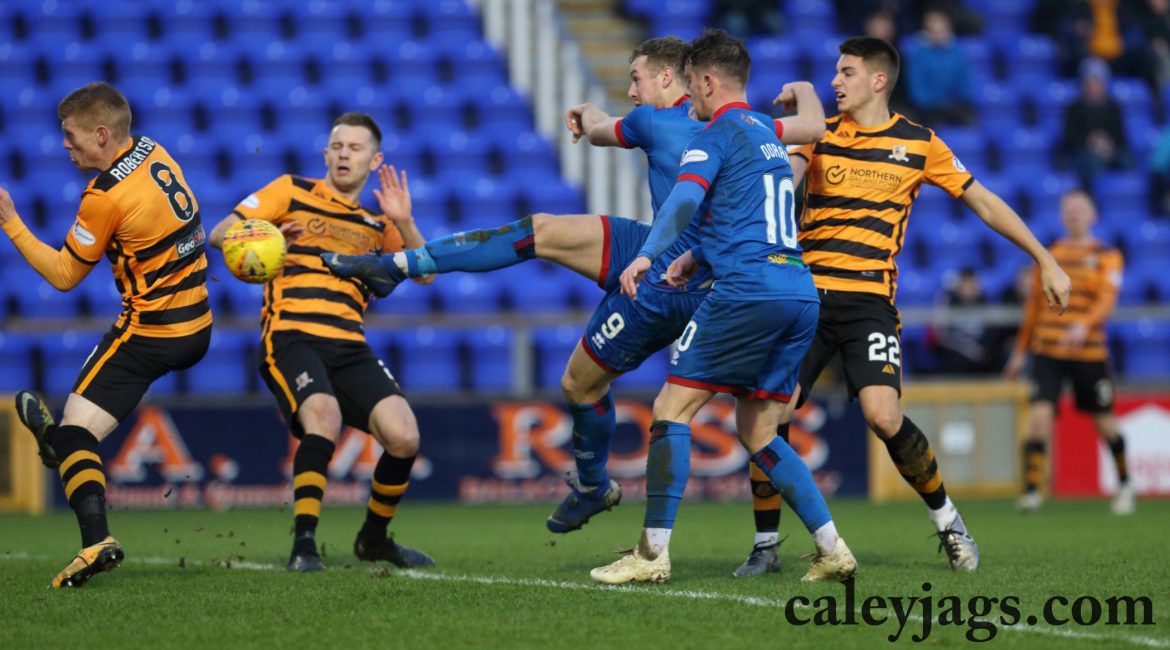 ICTFC came within an inch of victory as a last minute header bounced off the crossbar before the final whistle. In the end, the boys in blue and red had to settle for a point against Alloa Athletic, after bringing the game level from a White volley from close range in response to a first half penalty from the visitors. The game finished 1-1.

Tom Walsh swapping in for James Keatings was the only change to the Caley Thistle starting line-up in the first home fixture of 2020, with the former still dealing with a hip problem.

Brad Mckay and Kevin McHattie started in the middle of defence alongside Rooney and Tremarco as fullbacks. James Vincent and Charlie Trafford acted as a base in the middle of the park, allowing Aaron Doran, Miles Storey and Tom Walsh to dovetail behind Jordan White.

Alloa Athletic gave the 19 year old goalkeeper Kieran Wright his debut, who was on loan from Rangers. Ben Stirling was the only other change for the visitors, who replaced Blair Malcolm.

Eager to finally play at the Caledonian stadium again having missed out in January, ICTFC had the bulk of the ball in the first half to create goal scoring opportunities.

From around the first minute, Tom Walsh pirouetted in the middle of the pitch to spread it wide to Doran on the left, who took a touch before cutting onto his right foot. His scooped cross was just cleared by Deas, with Walsh lurking to pounce on the loose ball near the edge of the box.

Moments later at the third minute, Miles Storey attacked from the opposite side of the pitch, hitting a great cross that was flicked on by White in the middle to Doran in space at the far post. Wright scrambled across to turn Doran’s half volley away and out for a corner.

Up at the other end of the pitch, Cawley took on a speculative shot from around 25 yards. He hit hit it low and down the middle which normally wouldn’t threaten, but en-route it took a massive deflection on its way and looped just wide of the post for a corner. With Mark Ridgers wrong footed, it was fortunate that the ball span in his favour. Ridgers was on hand to collect the set-piece and to settle proceedings.

At the 19th minute, there was a close shave on the behalf of the Caley defence. Kevin McHattie wasn’t aware of Robert Thomson sneaking up behind him when he was facing goal, and Thomson was on hand to chest down the headed pass back and attempt a tight finish from an acute angle. The ball didn’t ripple the net, in part due to Ridgers forcing him slightly wide, but it was a warning to stay alert.

Another great pass from Miles Storey from the right hand side at the 25th minute, who managed to squeeze it into the middle for Doran to prod towards goal. Wright gathered.

After 35 minutes, with the ball bouncing out towards the goal line, there was a shoulder to shoulder in the box between Shaun Rooney and Kevin O’Hara. Shaun tried to shepherd the ball away by bringing his arm across, but when the player became unbalanced and fell down in the Caley box, the ref adjudged it as a foul – an arguable soft call.

After a period of protests from the Caley Jags defence, Captain Iain Flannigan stepped up to firmly dispatch the spot kick, hitting it low into the bottom left, giving Ridgers little chance.

Alloa almost doubed their tally at the 35th minute via a dangerous cross from O’Hara to the backpost; Ridgers spread himself well to stop the volley from Cawley from beating him, after managing to keep his shot down low.

Amid the 1-0 scoreline, it was still ICTFC with the majority of the ball and opportunities to score and they had the last say just before the break. Tom Walsh evaded his man on the right flank before pinging an excellent cross to White in the middle, but off-balance he could stretch to prod his attempt down the throat of Wright for a straightforward save.

Alloa’s O’Hara had a half chance just after the re-start, taking down a lofted pass from the far side and hitting it left footed on the half volley towards the near post; but it sailed wide. In response at the opposite end, Tom Walsh controlled a cushioned Trafford pass and hit a left footed shot that squeaked past the post for a corner via a deflection. When the cross was cleared, Shaun Rooney tried to direct a low drive from 30 yards out but through a mass of bodies, Wright got down to smother it.

The next chance was also from Aaron Doran at range, keeping his head down and rifling a long distance effort on target for Wright to stop to his right.

But eventually the dam would break in the Alloa defence.

At the 58th minute, Charlie Trafford came off for Sean Welsh, who returned to the team for the first time since October.

And Welsh immediately contributed to the game, floating a chipped pass for White to win before chesting it down, holding it up and then smashing it into the net on the swivel for the equaliser from close. A well-earned break in fortune for the home team.

With a goal in hand, Caley Thistle looked more fluid and started to carve out opportuities to pick up the three points. Shaun Rooney ducked and snaked his way through challenges on the right hand side, cutting back a firm pass to Doran in space. Just after pulling the trigger, an Alloa leg stuck out to deflect the ball away rom danger.

With Alloa sitting back, trying to plug holes in their defence, Caley kept on coming via Tom Walsh. The winger flicked a pass around the corner to Storey bombing down the right hand side. The Englishman evaded a challenge via nimble footwork and cut it back for Doran in the middle. Somehow the Irishman evaded a diving Alloa player to flick it into space on his right and hammer a shot towards the near post, only for it to land on the wrong side of the net – a great chance.

But even though the pressure was being placed on the Alloa defence to hold a draw, the Caley Jags would need no further reminders of Alloa’s threat in the last five minutes of normal time. Kevin O’Hara in space squeezed a deadly pass across goal and from almost point blank range, new sub Alan Trouten guided a shot on target, only for Ridgers dive down smarty to deny a winner from the visitors.

As the clock kept on ticking, Doran tried to steal the win from outside the box, cutting inside to test Wright. And just before the whistle, Caley would feel like the game was just in their grasp. With Shaun Rooney carrying a slight knock from a collision with Mark Ridgers, he rallied forward and shrugged off a challenge to clip a cross to Doran on the left hand side of the box. His cross in turn was met firmly by White in the middle but it was inches too high, cannoning off the cross-bar and away from danger.