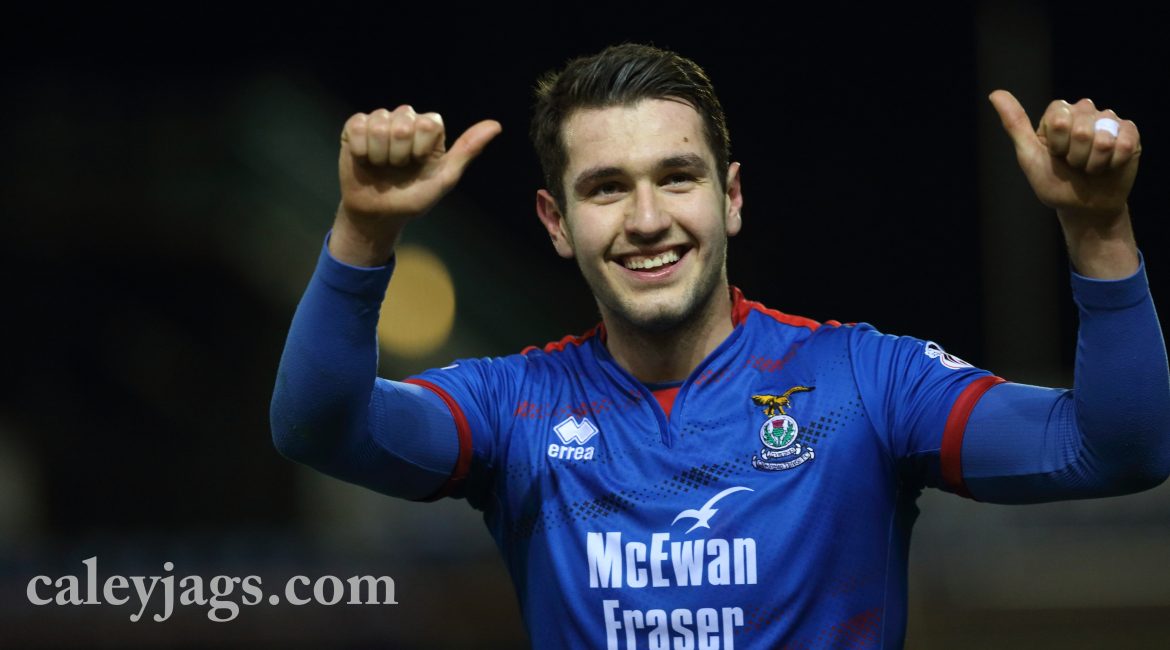 It took a last minute goal from Nikolay Todorov to secure the three points for the Caley Jags and to cap off a free scoring display that no other game in the Championship managed to muster on Tuesday.

The game ended 3-2 to the hosts, with Jordan White, Shaun Rooney and Todorov dominating aerially with headed goals. ICT remained second and are now three points ahead of Ayr Utd, who sit third.

But going into the game, John Robertson was aware of the challenge that he faced from the visitors. Greenock Morton were arriving at the Caledonian Stadium with an unbeaten league record in 2020 and had just recently gained a comfortable victory against QOTS, 4-0.

David Hopkin’s team had three injuries to the squad, but only one change to the starting line-up from their previous game. Cameron Salkeld, Kris Doolan and Kyle Jacobs were out with injury; Cameron Blues was the replacement in midfield.

For the Caley Jags: Roddy MacGregor, Miles Storey and Lewis Toshney freshened up the starting line-up from the away game at Hibernian in the cup; Doran and Keatings started on the bench and Brad McKay was serving his one match of his suspension. Youth midfielder Kane Davies managed to earn a place for the first time in the first team squad, making the bench.

With their reputation on the line, it was Morton’s Nicky Cadden who made the first salvo in their attempt to extend their winning streak, jinking inside from the right at the second minute to fire a shot low and on target, but Ridgers got down well to save to his left.

From the 13th minute onards, Caley Thistle got a hold of possession and turned the screw as they bombarded the goal.

Firstly, David Carson whipped in a great cross from the right hand side and Greenock goalkeeper, Danny Rogers could only just tip over Jordan White’s dipping header. The corner was half cleared and Miles Storey forced Rogers into another tipped save with a fierce drive from near the edge of the box.

Again players challenged and barged for the corner, but this time it left Rogers a little shaken and bruised, struggling slightly with what seemed to be a dead leg. He unconvincingly opted to take the goal kick with his left foot, which landed to a Caley shirt, unleashing Tom Walsh down the right hand side.

The boys in blue instantly tried to test Rogers’ fragility and Walsh’s cross from the right was easily met by White, whose header planted the keeper to the spot as it sailed into the bottom corner.

Still smelling blood, Tom Walsh tried to further take advantage from distance at the 24th minute, with differing results. The winger cut in to take a ping from around 25 yards but couldn’t keep his effort down as it sailed over.

Morton’s Nicky Cadden still created a threat on either side of the pitch and it was him that looked most likely to bring things level for the visitors. He hit a slightly curving shot on the left side from an angle at 25 yards out, but Ridgers defended his near post well to catch the ball with no issue.

But minutes later he came closer from a dead ball situation on the right side. Cadden whipped the ball from left to right from 25 yards and if it didn’t bend half a yard too far, Ridgers’ goal would have been in far more danger.

Just before the end of the half, Morton’s Jack Baird barged into Walsh at the 30 yard mark and Carson’s floated freekick was just narrow of Tremarco’s run at the back post. The Captain was slightly behind the ball but was in acres of space.

At the restart, Cadden had a great opportunity to test Ridgers from inside the box as he lined up a volley first time, but he seemed to snatch at it and got too far under the ball; it went high over the bar.

Miles Storey picked the pocket of Timothy on the left at the 48th minute, but the cut-back pass to Walsh wouldn’t bare fruit with no space to shoot for the winger. Tremarco picked up the scraps and his cross to White was easily won by the big number nine, but the header wouldn’t drop under the crossbar.

After that, there was a short pause in action as both sides tried to figure each other out. A goal would come at the 60th minute, via opportune positioning.

From the left wing, Lewis Strapp pulled a drilled ball across the box, which normally would have been cleared but a tangle of legs brought a Caley Thistle and Morton player to the ground and the ball arrived at Nebitt’s feet in space. His placed shot went through Ridgers’ legs and tied the game square – it was his third goal in four games.

Seven minutes later and the hosts would be back in front via a set-piece. David Carson was bundled to the ground around 30 yards out and from the right hand side he floated a deep ball to Rooney in tonnes of space in the box, who glanced it into the near post with ease; a relatively straight forward header for the fullback.

A couple of minutes later, Storey swapped positions with White on the wing, who cut inside and forced Rogers into another save. MacGregor tried to gobble up the rebound but Rogers flapped it away from danger, preventing a third goal that surely would have killed off the game.

That opportunity to get back into the tie was eventually take by Morton under bizarre circumstances.

Nicky Cadden’s right footed cross towards the back post looked to be flying out of bounds but was salvaged in the air by newly minted sub, Craig McGuffie. The midfielder scooped it back towards the middle and Reece Lyon bundled it in with the tip of his toe into an empty net from only six yards away. Ridgers misjudged the cross and was out of position, so was helpless to see it go in.

Looking to end the game on top, John Robertson brought on Aaron Doran, James Keatings and Nikolay Todorov. Their attacking flair certainly provided a new nuisance to the visitors, but with time winding up in the game, it started to look like a draw would be the result. With the seconds ticking down, there was still an air of opportunity for either team to grab onto and it was the home team that got it just barely before the final whistle.

Aaron Doran’s cross from out to in was flicked on by Carl Tremarco in the box for substitute striker, Nikolay Todorov who easily muscled off his mark to power the ball down off the post and in. It was second goal in two games for the Caley Jags, and what secured the win in an entertaining Championship fixture.