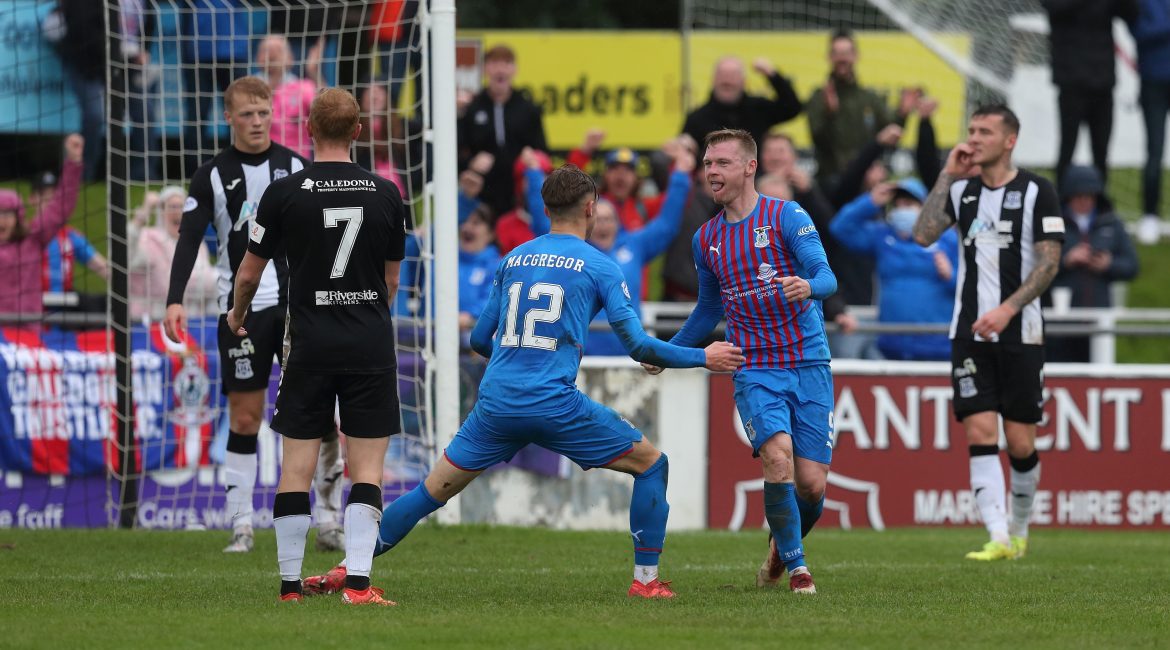 The Caley Jags recovered from an early two goal deficit in the first half to win against Elgin City in the 3rd round of the SPFL Trust Trophy, progressing to the quarter finals.

Elgin City’s Tom Grivosti and Brian Cameron set the hosts up for a shock two goal lead in the early stages of the first half but Billy Mckay got the Caley Jags level before the break with a three minute double. ICT’s second half continued the momentum as Billy rounded off his hat trick via a placed left footed strike at the 66th minute. Lewis Jamieson got his goal and ICT’s 4th shortly afterwards with an ice cold dink past Thomas McHale from close range.

Billy Dodds refreshed his side for their short away trip to Borough Briggs, with numerous changes to the typical first team. Lewis Jamieson and Billy Mckay started as a strike duo with Shane Sutherland and Roddy MacGregor supporting. Cammy Mackay stepped up between the sticks in place of Mark Ridgers and in front of him was a backline of Cameron Harper, Robbie Deas, Danny Devine and Wallace Duffy.

Facing the Scottish Championship leaders was a familiar face as Matheus Machado started on the bench against his former side.

ICTFC started the game well as Cameron Harper went head to head against Grivosti down the channel and forced a quick cutback for Jamieson to connect with a sliced shot across goal. The young striker didn’t get the connection he wanted and dragged it wide of the right hand post.

In a physical start to the game, the hosts would score with effectively the first shot on target at the 7th minute.

Brian Cameron played a pass down the right hand side for Angus Mailer to chase but it was cut out for a corner by Deas on the slide. The set piece from the near side by Archie MacPhee was met by Tom Grivosti at the back post to fire home past Cammy Mackay.

ICT tried to search for the equaliser with a series of chances at the 18th minute. Shane Sutherland cutback a pass to Duffy down the right wing and his lofted ball to the back post almost found a lurking Billy Mckay, but it was flicked away by a defender. Up next was Lewis Jamieson, who tried to find Sutherland in the middle after picking up the scraps, but his pass was just behind the striker.

Despite the pressure the hosts extended the lead at the 21st minute via a quick break, with Connor O’Keefe avoiding a tackle down the right hand side and then setting up Cameron in the middle of the box with a first time half volley past Mackay.

The visitors started to get back into the game as Cameron Harper recovered a cross from the far side to hit a back post pass for Mckay to test Thomas McHale in the air. The Northern Irishman’s header was palmed away by the shot stopper on the dive.

The Caley Jags wouldn’t be shut out though and they got their first goal through neat play between the strike pair. Lewis Jamieson found the space to receive a ball in the box and telepathically flicked it behind him to set up Billy Mckay to fire past the keeper’s near right post on his left peg.

A minute later, ICT took advantage of their newfound momentum and notched the equaliser from the same side. Reece McAlear worked the ball over to the wings for Duffy to fire into the box and the midfielder continued his run to flick the cross towards the back post for Billy Mckay to bundle home – a double in two minutes.

For the first time in the game, the Caley Jags would get the lead at the 66th minute.  Roddy MacGregor evaded two tackles on a mazy run and was taken down as he spread the ball to Sutherland on the left hand side. The play went on as the former Elgin striker found Billy Mckay in the middle of the box  and with a low cross hit a swept left footed shot into the bottom left corner.

Five minutes later, the Caley Jags looked to be out of sight as they notched their fourth goal five minutes later. ICT got the quick break as an Elgin move broke down and Mckay on the far side found McAlear in space. The midfielder only needed a touch before prodding a through ball on the outside of his boot for Jamieson to chase one on one.

The energetic striker had the time to eye up his target and cheekily dink past McHale to extend the lead from close range.

Barely a moment later the same trio almost created a fifth goal, as McAlear bent a curling ball originally intended for Mckay near the edge of the box, but slipped to Jamieson waiting in behind. The striker tried to create a window to shoot but was shepherded out of play.

Manny Duku almost added some polish to the score immediately after coming on at the 77th minute, latching onto a Mckay through ball and forcing McHale into a save to keep it out of the far post. From the corner Lewis Jamieson also kept Elgin’s defence honest with a near whipped in  goal directly from a corner late into the half, with McHale’s fingertips just keeping it out from his top left hand corner.

ICTFC next face Raith Rovers at home on the 30th November in the Quarter Finals of the Challenge Cup.