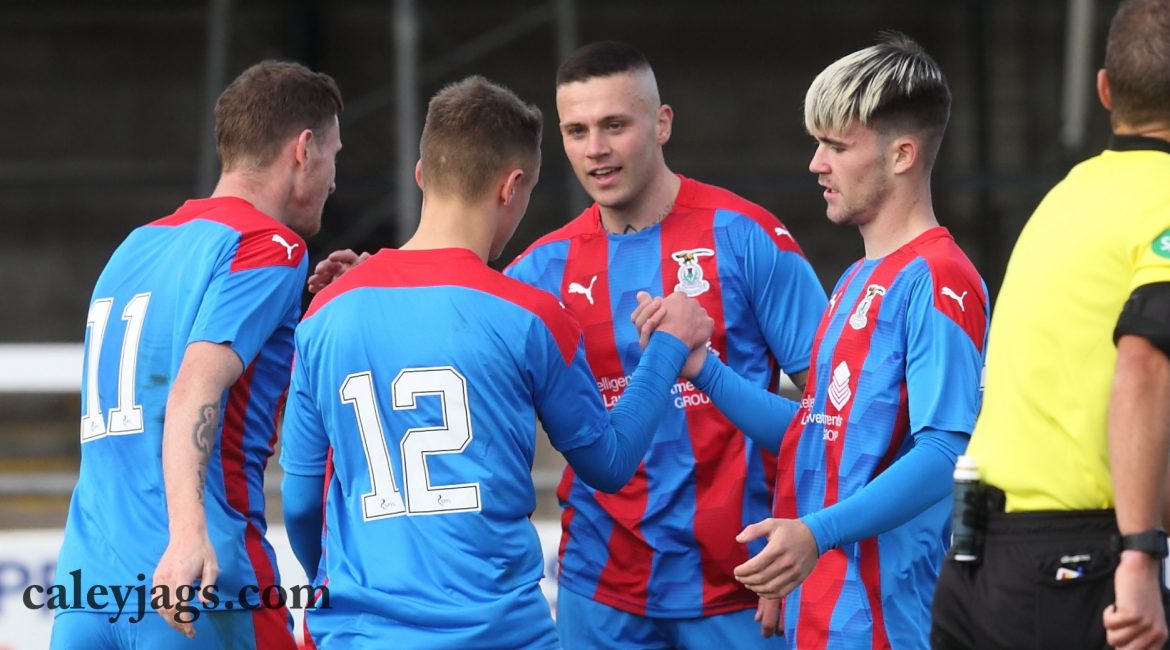 Caley Thistle returned to action for the first time since football was shut down due to the coronavirus pandemic as they beat Elgin 7-3 at Borough Briggs in a pre-season friendly.

James Keatings, Miles Storey and Roddy MacGregor all grabbed two goals while Nikolay Todorov also got on the scoresheet. For Elgin, Kane Hester netted a double and Stephen Bronsky got the other for the home side.

The game didn’t have to wait long for the first goal, after only three minutes on the clock James Keatings unleashed a curling strike into the top left hand corner to get the Caley Jags up and running.

After 12 minutes, a corner found its way to Scott Allardice in the box but his effort was just wide of the post and behind for a goal kick.

Caley Thistle did get their second shortly after, with 22 minutes on the clock Nikolay Todorov unleashed a low strike from just outside the box past McHale in the Elgin goal.

Elgin got themselves back into it 7 minutes later, good work from Kane Hester down the right hand side as he cut inside and fired low past Mark Ridgers to make it 2-1.

Nikolay Todorov was close to adding a third for Caley Thistle just on half-time but he saw his effort go narrowly wide from about 8 yards.

Cammy Mackay was called into action straight away as he produced a great save to deny Kane Hester from levelling the match.

After 52 minutes, Roddy MacGregor went inches wide for Caley Thistle after James Keatings played a short corner to the youngster and he unleashed a strike.

Just two minutes later, Caley Thistle did get their third through James Keatings from the penalty spot. The penalty was won after a great run by Shane Sutherland down the right hand side and he was fouled by Euan Spark in the box. Keatings made no mistake from the spot to make it 3-1.

Keatings was then replaced by young midfielder Lewis Hyde.

With 25 minutes remaining, Scott Allardice was close to picking out Daniel Mackay through the middle of the pitch but the onrushing Elgin goalkeeper prevented Mackay from getting the ball.

Elgin brought the game to 3-2 with 20 minutes on the clock, Kane Hester capitalised on a loose backwards header by Toshney to finish from close range.

With 15 minutes on the clock, it was 4-2 to the Caley Jags. Miles Storey was picked out superbly by Cammy Mackay to put him clean through on goal and he made no mistake firing low into the bottom corner.

Three minutes later, Roddy MacGregor got Caley Thistle’s fifth of the afternoon. It was good work from Shane Sutherland down the left hand side and he cut inside and shot but his effort found its way to MacGregor in the box for a tap in.

Elgin got another back after 80 minutes on the clock, Stephen Bronsky headed into the back of the net after meeting a corner in the box.

Lewis Nicolson then replaced Cameron Harper with 8 minutes to go.

But the goals kept coming, Miles Storey added another as he was played down to the right hand side by a great ball from Shane Sutherland and he made no mistake again to get our sixth of the game.

Roddy MacGregor added a seventh with 5 minutes to spare in the match as he received the ball in the box and cut inside and curled his effort past the Elgin keeper.