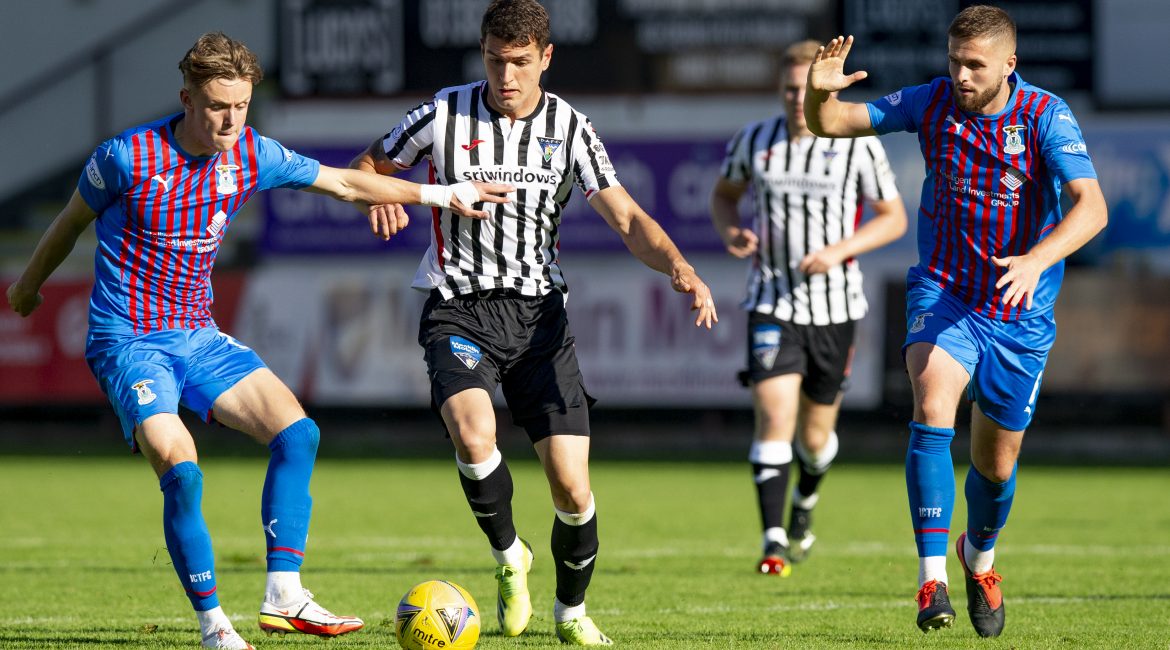 A stalemate at East End Park seen the Caley Jags and Dunfermline share the points in an end-to-end game, with neither team able to break the deadlock thanks to excellent performances from Mark Ridgers and Owain Fon Williams.

The two sides came into the fixture with very different runs of form, the Highlanders had maximum points from their first five games but the struggling Pars only had achieved 1 point from their opening four and sat bottom of the table.

The hosts started the game well, with their first chance coming from an early Josh Edwards corner which found Vytas Gaspuitis at the front post. However, his glancing header was just wide of the far post.

In the 15th minute, the Dunfermline keeper produced an exceptional double save with his feet. Firstly saving Robbie Deas’ low effort at goal and then the rebound which was hit by Shane Sutherland from the right of the 6 yard box.

A mix-up in the Caley Jags defence presented ex player Nikolay Todorov a shot from range when Kirk Broadfoot’s clearance landed at the Bulgarians feet but his low shot was not powerful enough to beat Ridgers off his line, which was blocked by the goalkeepers feet.

Manny Duku was given his first chance of the match when he was put through on goal, but his effort was well blocked by Aaron Comrie to put the ball out for an Inverness corner which was cleared from the danger zone by Gaspuitis.

In the 30th minute an Inverness corner was headed away only to reach Aaron Doran on the edge of the box who tried a first-time volley, but his effort was wide and high of the right post.

Shane Sutherland was forced off through injury in the 34th minute after being fouled by Kai Kennedy just outside of the box with Billy Mckay replacing the striker in a straight swap.

A bit of skill from ex loanee Kai Kennedy saw him dribble past Carson and Allardice before he fell to the ground in the box however the claims for a penalty were waved away by referee David Munro.

Just before the break, Scott Allardice floated a long ball over to Tom Walsh where the winger attempted a cross into the box which was deflected for a Caley Thistle corner. The resulting corner by Walsh was met by Broadfoot but his header was wide of the post.

Aaron Doran, who celebrated his 300th appearance for the club, made way at half time for Cameron Harper.

There were no clear-cut chances for either team at the beginning of the first half with both teams shutting each other out. The first chance of the half came for Duku an hour in when he met Robbie Deas’ cross only to put it over the crossbar. Only 2 minutes later Kai Kennedy seen his shot go over the bar from outside the box after cutting inside past the Caley Thistle defence.

Inverness had back-to-back chances to take the lead, the first coming when Harper found Walsh at the back post who fired his half volley past the Dunfermline post via a deflection. Robbie Deas did well to find substitute Billy McKay on the edge of the box where he turned and shoot – however his shot fizzed inches past the post.

A goal bound effort from Dom Thomas was well blocked by Deas as Dunfermline started to put pressure on the Inverness back line. Dunfermline substitute Craig Wighton tried to impact the game late on with a few big chances. The striker created space for himself which allowed him a shot at goal which was wide of the Caley goal. Wighton again troubled the defence when he whipped in a cross to Todorov in the 6-yard box creating a golden opportunity for the striker from which he forced an unbelievable save from Ridgers who then also managed gathered the rebound on his  line after a scramble in the goal mouth.

Caley Thistle’s final chance to keep their perfect start came in the 87th minute from a free kick in a dangerous position when Walsh found Broadfoot in the box but the defender headed the ball wide.

It was a scare in the dying minutes for Caley when Wighton broke clear on goal after beating Devine and drove goal ward however Mark Ridgers was there again to keep Dunfermline out when he parried the strikers shot away to keep his well-deserved 5th clean sheet of the season, meaning Caley Thistle went home with a point.

Next up is Queen of the South back at the Caledonian Stadium in our next fixture in the cinch Scottish Championship.