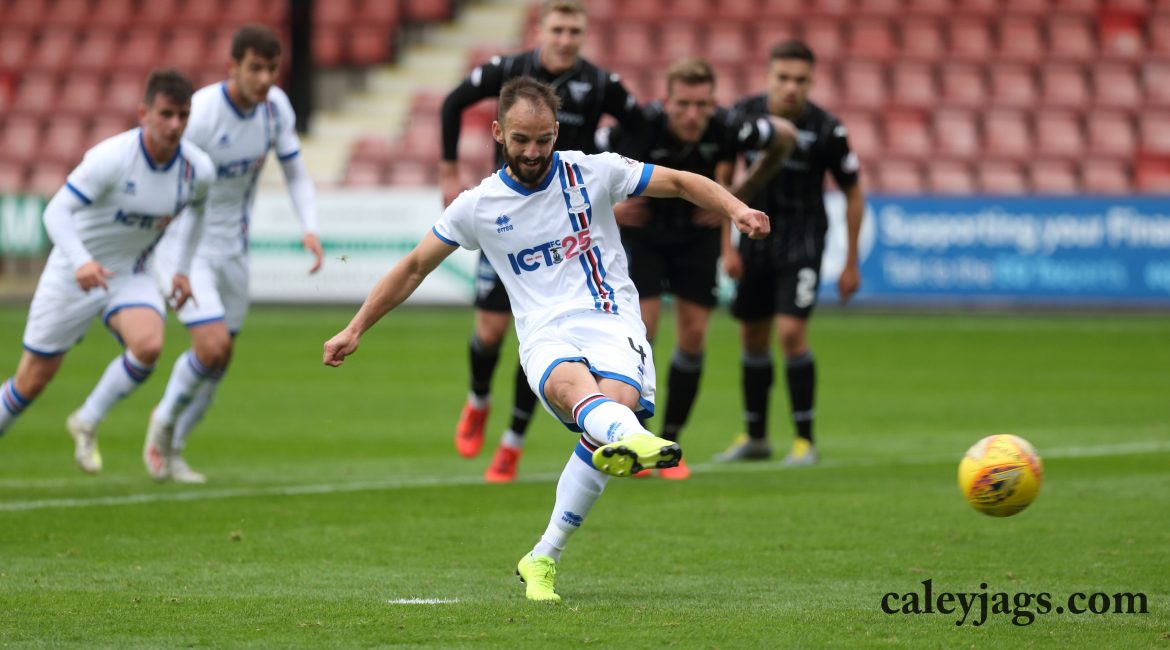 A late penalty from Sean Welsh won all three points for the Caley Jags against Dunfermline at East End Park.

Danny Devine was penalised for a handball late on and Welsh stepped up and put his penalty down the middle to secure all three points.

Caley Thistle sit third in the Championship table on ten points, 2 behind Ayr and Dundee United who occupy the top two spots.

John Robertson made one change to the side that beat Morton 5-0 in the club’s last league match as James Keatings was ruled out with an injury and was replaced by Miles Storey.

The first chance fell to the Pars as Greg Kiltie cut inside but saw his effort blocked on route to goal and behind for a corner. The resulting corner fell to Ashcroft in the box but his header was blocked by Tremarco.

Miles Storey was close to meeting Tom Walsh’s delivery in the middle after 11 minutes but the ball was then worked by Caley Thistle and it went wide to Doran with his cross finding White at the back-post but his header was blocked.

With 14 minutes played, Tom Walsh’s dangerous corner delivery was flicked on by the head of Carl Tremarco but Cameron Gill was able to collect it.

Dunfermline had a big chance before the break, Paul Paton’s volley went just wide of the post after 37 minutes after he met Tremarco’s headed clearance.

In the second half, Dunfermline started well as Josh Edwards’ delivery had to be touched behind by Ridgers for a corner to the home side.

After 51 minutes, Kevin Nisbet drove forward for the Pars but his effort from just inside the box was wide of the post.

After 64 minutes, Carl Tremarco found Miles Storey in the middle but the forward could only fire his effort wide of the post from inside the box.

After 83 minutes, Aaron Doran tested Gill from range as he unleashed a strike from around 20 yards but the Dunfermline keeper parried it clear.

Caley Thistle were awarded their spot kick with 85 minutes on the clock as Danny Devine was judged was have handled the ball in the box.

Sean Welsh stepped up and smashed his effort down the the middle to secure all three points.