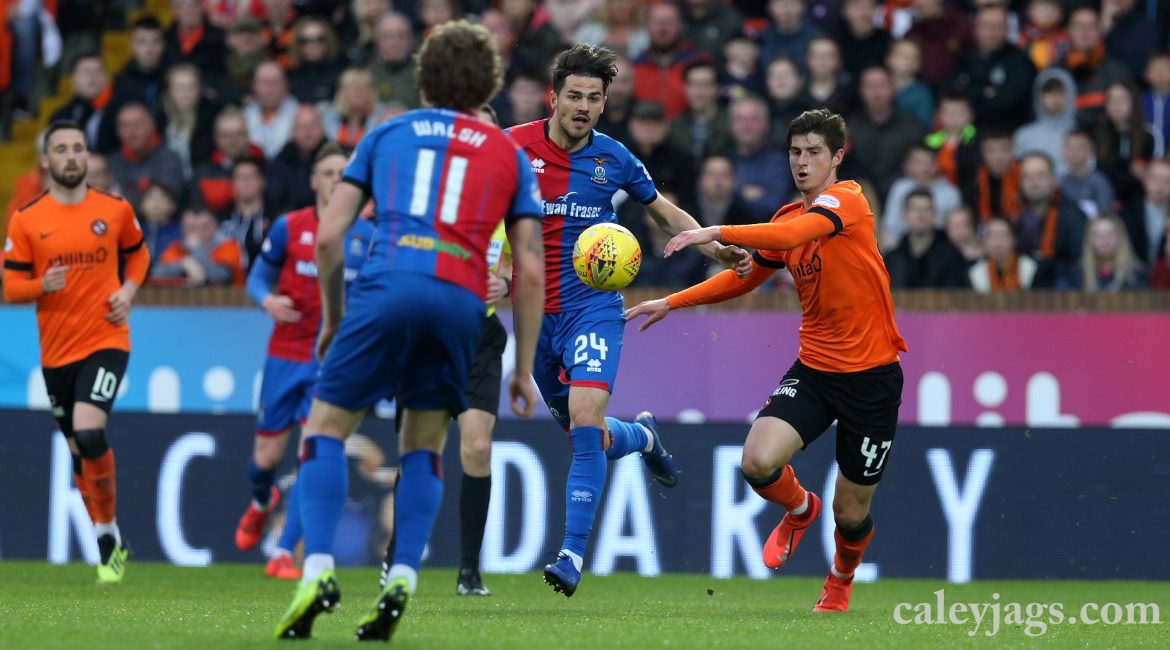 Caley Thistle fell to a 3-0 defeat against Dundee United at Tannadice Park in the second leg of the Premiership Play-Off Semi-Final.

The turning point of the match was on the stroke of half-time as Kevin Clancy controversially awarded a penalty against Brad Mckay for handball, even though the ball had deflected off Mckay’s leg and onto his arm.

It was second half goals from Osman Sow and Pavol Safranko which killed the tie.

United went into the tie 1-0 up after winning at the Caledonian Stadium on Tuesday, via Paul McMullan’s strike.

John Robertson had made on change to the side as, the suspended, Liam Polworth was replaced by Tom Walsh, who was returning from injury.

Dundee United had the first sniff at goal after seven minutes as Peter Pawlett found some space but his effort was collected by Mark Ridgers.

On the 13th minute, Chalmers’ corner found its way to Tom Walsh on the edge of the box and his effort was turned behind for a corner by Siegrist.

On the 18th minute, Charlie Trafford had a go from range but his effort was wide of the post.

Just after the half-hour mark, Caley Thistle continued to press for a goal and Jordan White’s flicked on header found its way to Aaron Doran who saw his effort turned behind for a corner.

From the resulting corner, Chalmers found White free in the box but his header was over the bar.

The Irishman had another chance after 34 minutes as he played through on goal by a wonderful ball from Brad Mckay but Siegrist was off his line to deny Doran.

After Caley Thistle creating the bulk of the chances, United had one of their own as Osman Sow saw his header deflected behind for a corner on the 36th minute.

Doran was then booked for a late challenge on Paul McMullan after 38 minutes.

Just before the 40th minute, Ian Harkes tested Ridgers with a shot but the Caley Thistle number one held onto it.

Right on the stroke of half-time, United were awarded their penalty kick as Mckay was judged to have handled the shot. Replays showed the ball hit is thigh first then his arm.

Nicky Clark stepped up fro United and sent Ridgers the wrong way to make it 1-0.

After the break, Charlie Trafford saw his effort go well wide of the post.

United doubled their lead after 54 minutes, McMullan found Osman Sow and the striker turned in the box to smash the ball past Ridgers for his first Dundee United goal.

ICTFC reacted by bringing on Nathan Austin for Shaun Rooney.

On the 66th minute, United went close through Nicky Clark but his effort was pushed onto the post by Ridgers as they searched for a third.

A minute later there was a mix-up in the Caley Thistle backline between Brad Mckay and Mark Ridgers as Clark nipped in but the striker somehow hit the post with goal gaping from about three yards.

Pavol Safranko went into the book on the 70th minute for a late tackle on Joe Chalmers.

Chalmers found Donaldson free in the box with a floated in free-kick but the Caley Thistle centre-back but his effort wide of the mark.

Anthony McDonald replaced Aaron Doran with around 15 minutes left, and almost made an instant impact as he linked up with Trafford and saw his cross turned behind for a corner.

Siegrist was called into action again on the 77th minutes as he turned Nathan Austin’s header behind.

United sealed the game and the tie on the 80th minute as Pavol Safranko broke clear and he slotted past Mark Ridgers.

Reaction from John Robertson can be found HERE