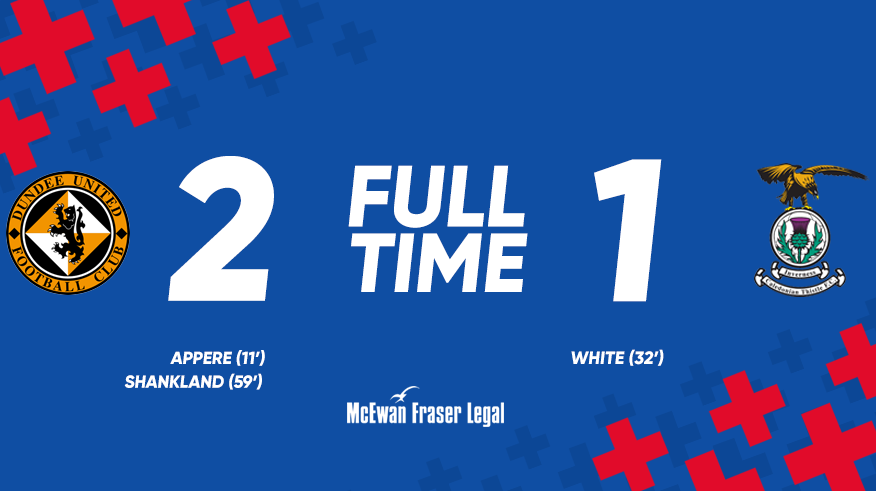 Louis Appere had given United the lead in the early stages of the match before Jordan White had equalised around the half-hour mark. Shankland though proved the match winner with his goal before the hour-mark.

John Robertson made two changes to the side which beat Rangers Colts last weekend in the Tunnock’s Caramel Wafer Cup Semi-Final, with James Keatings and Brad Mckay coming into the side for Charlie Trafford and Lewis Toshney.

The first chance of the match fell to Lawrence Shankland as he meet Butcher’s header in the box but his effort was hooked over the bar.

United then had the lead after 11 minutes on the clock, it was great play from Rakish Bingham down the wing as his cross found Louis Appere on the edge of the box and he produced a calm finish past Mark Ridgers to make it 1-1.

United were in the ascendancy and Connolly had a chance to double their lead just two minutes later but the defender saw his header go over the bar.

Caley Thistle began to grow into the game, James Keatings saw his effort go over the bar from 25 yards. After 25 minutes, Miles Storey picked out Jordan White in the middle but his effort was just wide.

After 28 minutes, Carson played a great pass to Walsh down the left-hand side and the winger cut inside but saw his effort go over the bar.

Caley Thistle did get level four minutes later, James Keatings’ corner found Jordan White middle and he headed past Siegrist to make it 1-1.

White would go close again before the break, he saw his effort deflected behind after a mix-up in the United backline.

After 54 minutes, James Vincent was fouled outside the box by Watson and ICTFC had a free-kick in a dangerous position 25 yards out. Keatings stepped up and took the free-kick but his effort was off the wall.

Just before the hour mark Dundee United had the lead again, Bingham found Shankland in the box and the United striker did well to find space in the box and fire a low shot past Mark Ridgers.

Jordan White found James Keatings with his lay-off but the Caley Thistle man saw his effort deflected behind after 67 minutes.

Two minutes later, Harkes was found after some good play from Rakish Bingham but the American saw his effort deflected wide.

Caley Thistle had a chance at the death as James Keatings’ corner found Shaun Rooney free in the box but his header was over the bar as he hurt himself in the process.

And there was to be another chance for the Caley Jags even later on, Shaun sprayed a long pass to Carl Tremarco, who was bombing down the left-hand side but the left-back could only direct his effort onto the side netting.