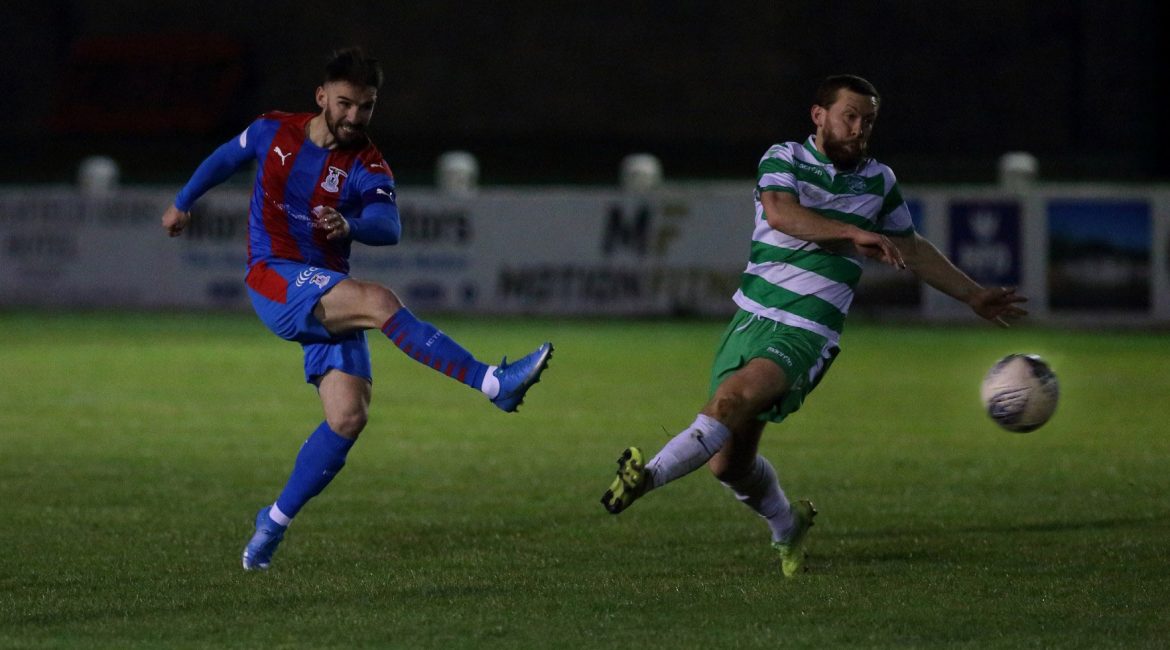 Caley Thistle progressed to the Third Round of the Scottish Cup thanks to a 3-2 win against Buckie Thistle at Victoria Park.

A goal after just 30 seconds from James Keatings opened the scoring for the Caley Jags but Jack Murray levelled the game with a close range header.

Sean Welsh scored from range to restore the lead before the break but Buckie looked to have forced extra time as Callum Murray scored with 6 minutes to go.

But, Daniel MacKay was on hand to fire past Bell with four minutes left on the clock to send the Caley Jags through to the next round where a Highland Derby against Ross County awaits.

It took the Caley Jags less than a minute to have the lead, MacKay’s cross found its way to Keatings in the middle after a scramble and the Caley Thistle man found the far corner to open the scoring.

Miles Storey had the chance to make it 2-0 after just three minutes on the clock as he raced through on goal but his effort was inches wide of the post.

Buckie got themselves level after 14 minutes on the clock, Jack Murray saw his close range header go past Cameron MacKay to make it all square.

Daniel MacKay looked lively on the left side and he produced a great solo run but blasted his effort over the bar after 25 minutes played.

Caley Thistle got back in front after 26 minutes played, Keatings played the ball to Sean Welsh and unleashed a powerful strike from about 30 yards past Bell to make it 2-1.

Buckie looked for a levelled and Kyle MacLeod saw his deflected effort go behind for a corner after 31 minutes.

Roddy MacGregor found himself in some space at the back-post after 38 minutes but his effort towards goal hit the side netting.

After 58 minutes on the clock, Kevin Fraser almost made it 2-2 with a header at the back-post but his effort was just wide.

Substitute Cameron Harper cut inside from the left hand side and unleashed a strike from inside the box but his effort was over the bar.

Miles Storey was presented with the chance to make it 3-1 after 81 minutes on the clock as he raced through on goal but he was denied as Bell produced a good save.

Robbie Deas or Shane Sutherland then just couldn’t quite get a full connection on a Harper free-kick which was whipped into the box after 83 minutes played and the chance went behind for a Buckie goal kick.

Calum Murray levelled the match for Buckie after 84 minutes, Callum Murray met a long ball and finished past Cameron Mackay to make it 2-2.

Caley Thistle responded well to the equaliser as they scored for the first attack after being pegged back.

Cameron Harper’s low cross made its way to Roddy MacGregor, via a Sean Welsh lay off, and he had two efforts blocked before Daniel MacKay was presented with the bar and fired it past Bell to make it 3-2.

Caley Thistle was hold on to progress to the Third Round where they will now face Ross County.