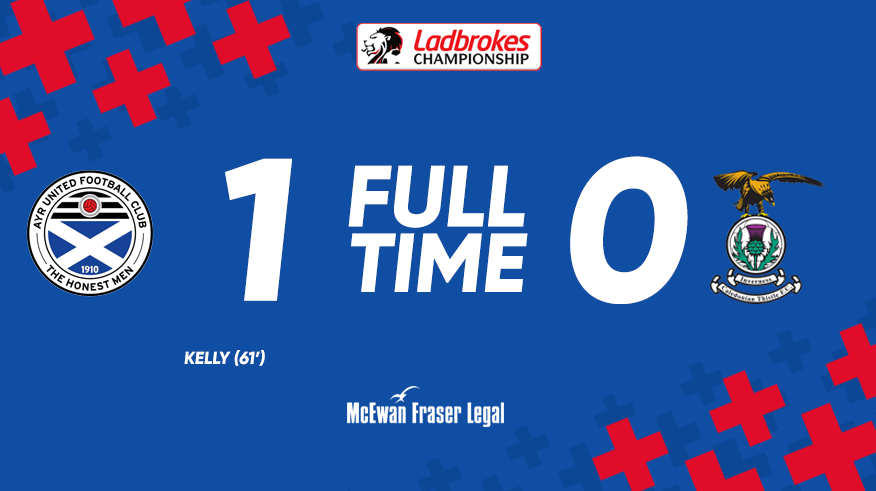 Ayr Utd moved to within one point of Caley Thistle in the Championship table as Stephen Kelly’s goal just after the hour mark won all three points for the home side.

Both sides named an unchanged side from last weekend’s Scottish Cup wins against Alloa Athletic and Ross County respectively. There was only one change to the Caley Thistle squad as Lewis Toshney replaced Roddy MacGregor on the Inverness bench, Toshney was cup-tied last weekend.

Striker Jordan White was presented with an early chance after four minutes as he got on the end of a loose pass by Steven Bell at the back but the Caley Thistle player was forced wide and his shot on goal was collected by Doohan.

Ayr United got their first chance of the match after 18 minutes on the clock, Stephen Kelly did well down the right and his cut-back found Aaron Drinan in the box, but Ipswich loanee saw his effort go wide.

After the Caley Jags controlling the opening 15 minutes of the match, Ayr began to step things up. Ross Docherty saw his effort blocked by Kevin McHattie and the follow-up effort had to turned by behind with an outstanding stop from Mark Ridgers.

Manager Mark Kerr then picked out Aaron Drinan on the edge of the box and the striker knocked the ball back to Alan Forrest and his volley was held by Ridgers.

Ayr were inches away from taking the lead after the half hour mark, Michael Moffat saw his header hit the crossbar as he connected with Stephen Kelly’s corner.

Five minutes later, Ayr had another chance through Steven Bell as he saw his header go just past the post after meeting Kelly’s free-kick in the middle.

Caley Thistle had a goal disallowed two minutes before the break as James Keatings whipped in free-kick went straight in but it chopped off as Jordan White was judged to have have fouled Ross Doohan as the ball was put in the box.

In the second-half, The Honest Men could’ve had the lead just two minutes after the re-start but James Vincent was on hand to clear Aaron Muirhead’s shot off the line.

Jordan White then went close for Caley Thistle after 50 minutes, the striker met Carl Tremarco’s cross in the middle of the box but his header was just over.

Inverness then went even closer as Charlie Trafford saw his header cannon off the crossbar after he connected with James Keatings’ corner in the box.

Ayr had the lead after 61 minutes as Stephen Kelly capitalised on a mistake by Charlie Trafford to race through on goal to slot past Ridgers to make it 1-0.

John Robertson then made a double sub as David Carson and Tom Walsh came on to replace James Keatings and Miles Storey.

With 12 minutes remaining, Aaron Doran was booked for simulation after going over in the box which looked a harsh decision on the Irishman.

There was a chance late on for the Caley Jags as Walsh’s cross met White in the middle but his effort was blocked and Ayr cleared as they full time whistle went.