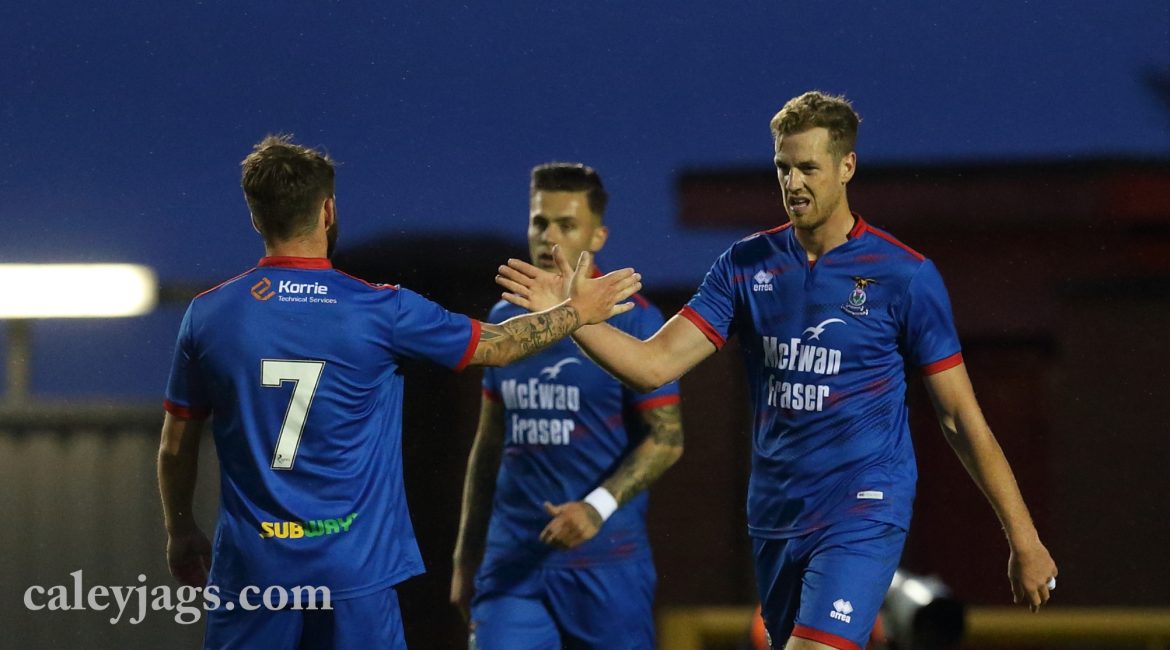 Inverness Caley Thistle progressed to the final of the Pat Munro North of Scotland Cup after beating Clach 4-1 at the Caledonian Stadium thanks to a hat-trick from Jordan White and a goal from James Keatings.

Caley Thistle will face Brora Rangers in the final after they beat Fort William 3-1 in the other semi-final.

Clach had the first chance of the game after 4 minutes as Cameron Mackay produced a fine save to deny MacDonald.

Caley Thistle had the ball in the net after 7 minutes as Miles Storey played in James Keatings, who found the back of the net, but the offside flag was up.

After 11 minutes on the clock, Matheus Machado saw his effort blocked and behind for a corner which Kevin McHattie was close to reaching.

Keatings then saw an effort saved by MacLennan as Kevin McHattie found him in the middle after 15 minutes.

Just a minute later Jordan White broke the deadlock for the Caley Jags, White meet Matheus Machado’s ball in the middle of the box with a header to make the breakthrough.

MacLennan was then called into action after 23 minutes as he denied James Keatings’ header from close range.

Miles Storey then showed his pace as he broke clean through but he was denied by MacLennan as he produced another fine save.

Caley Thistle did double their lead after 32 minutes as James Keatings took down a great ball from Jamie McCart in the box, and finished past MacLennan.

The referee then awarded a penalty to the Caley Jags as Sean Welsh was taken down by MacLennan in the box. Welsh stepped up to take the spot kick but was denied by a fine save from the Clach keeper.

At the start of the second-half, Cameron Harper replaced Kevin McHattie.

Caley Thistle had a goal five minutes into the re-start as Jordan White headed in from close range after meeting Miles Storey’s cross in the middle.

James Keatings found Matheus Machado in the box but the Brazilian fired his effort over the bar.

Clach had one back on the 65th minute as Eachainn Miller headed past Cammy Mackay at the back-post.

Jamie McCart needed to be replaced in the 69th minute after he received treatment and Nikolay Todorov came on in his place to slot in at centre-back.

White completed his hat-trick after 70 minutes, he converted from close range as he met Matheus Machado’s cross in the middle.

A late effort from David Carson thundered off the post as the game finished 4-1 to the Caley Jags.