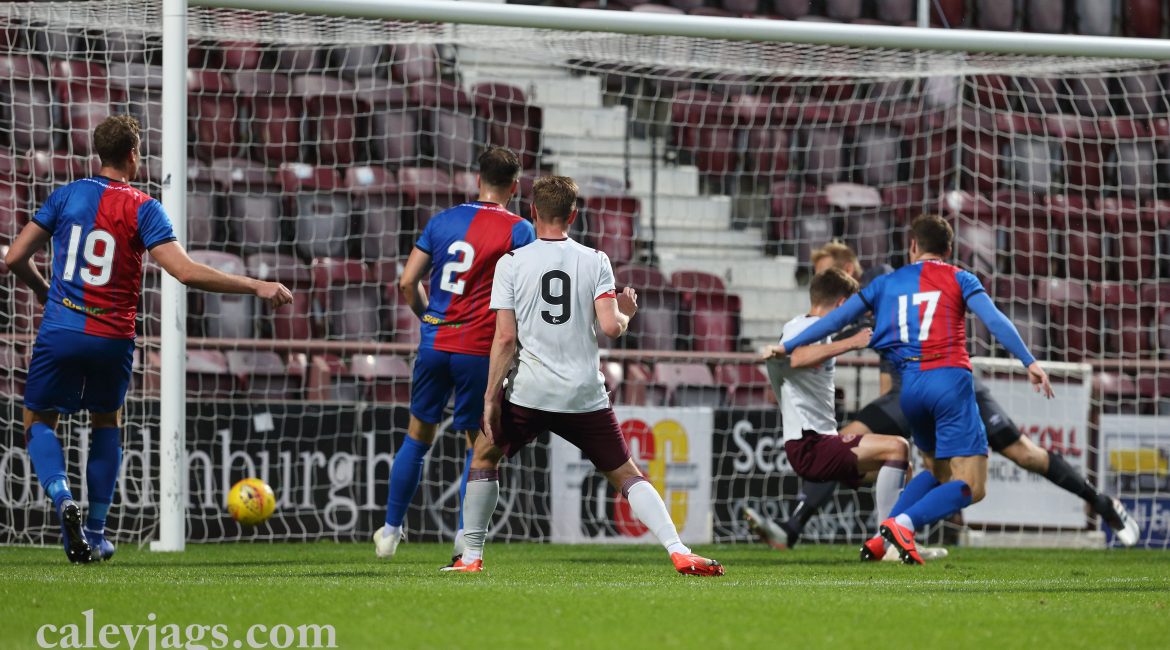 Mitch Curry’s second half goal was enough to secure Caley Thistle a 1-1 draw against Hearts at Tynecastle Park in Angus Beith’s benefit match.

The match was held as Angus Beith, a former player for both clubs, had to retire earlier in the year due to ongoing hip problems.

Angus received a guard of honour from both sets of players and the managers of both clubs before the match started.

Hearts were forced into a early change as Craig Wighton was forced off due to injury and was replaced by Euan Henderson.

Caley Thistle could have had the lead after 10 minutes as Tom Walsh delivered a great ball into the path of Matheus Machado but his header was wide.

Euan Henderson looked to make an instant impact off the bench after he saw his effort go narrowly wide after he was set up by Anthony McDonald.

Hearts had the lead after 21 minutes, a well worked free-kick made its way to McDonald and ex-Inverness loanee fired past Mark Ridgers.

Nikolay Todorov met Tom Walsh’s whipped in free kick in the box but his header was collected by Doyle.

Mark Ridgers was called into action after 35 minutes as he produced a superb save to keep out Euan Henderson.

Just a minute later, Ridgers was called into action again as Henderson was played in on goal but he produced another fine save.

Hearts had a scare just before the break as Walsh’s cross delfected off Dikamona and went behind for a corner via the crossbar.

In the second-half, Walsh picked out Todorov with another fine ball but his header was just over the bar.

Mark Ridgers produced another fine stop on the hour mark as he denied Anthony McDonald with a fine one handed stop.

James Keatings could’ve levelled things after 67 minutes as he played in on goal by Charlie Trafford but his effort was over the bar.

Hearts substitute Cameron Logan dragged one just wide with 20 minutes to go as he played a neat one-two with Steven MacLean.

Caley Thistle made a further change as Charlie Trafford was replaced by Lewis Hyde.

Caley Thistle got their leveller with 13 minutes to go as Mitch Curry converted James Keatings’ corner after a scramble in the box.

Caley Thistle made further two subs before the end of the match as Harry Nicolson and Roddy MacGregor replaced Brad Mckay and James Keatings.

Ridgers produced yet another fine save just before the end of the match as this time he kept out Aidan Keena.

Reaction and Highlights via Sky Sports