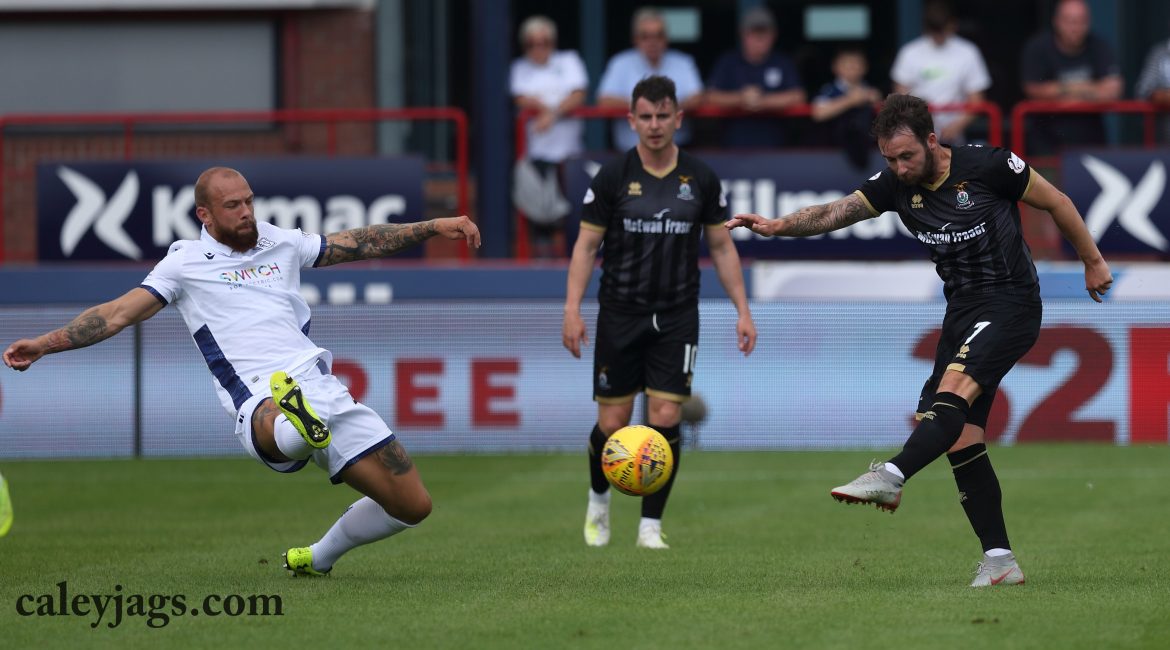 Danny Johnson’s goal on his Dundee debut was enough to send Dundee through to the last 16 of the Betfred Cup in a 1-0 for the Dee at Dens Park. Caley Thistle finish as runners up in the Group but weren’t one of the four best placed runners up so exit the competition.

John Robertson made one change to the side which beat Cove Rangers on Tuesday night as Charlie Trafford replaced David Carson.

The first real chance of the match fell to Danny Johnson after 8 minutes on the clock as he shot from around 20 yards but his effort was tipped over by Mark Ridgers.

James Keatings had the first chance of the match for the Caley Jags as he unleashed an effort from about 20 yards but his effort was parried away by Jack Hamilton.

Jordan Forster produced a fine piece of defending as blocked James Keatings effort after the striker linked up with Tom Walsh. Jamie McCart then flicked a header over the bar.

Dundee had a huge chance through Danny Johnson to open the scoring as the ball broke to him around 6 yards out but he fired over.

James Keatings looked lively for the Caley Jags and forced Jack Hamilton into another stop after 27 and he hit a strike from 20 yards and it took a deflection on its way through on goal.

Dundee got the breakthrough after 33 minutes as Danny Johnson netted on his debut. Byrne played a reserve pass into the striker’s path and he fired his shot past Mark Ridgers at the near post.

In the second-half, the Caley Jags looked for an equaliser as Doran’s deep cross found Walsh at the back-post but his header across goal was collected by Hamilton.

On the 51st minute, Aaron Doran was found in the box by a good ball from Brad Mckay but the Irishman couldn’t quite connect with it as Dundee got a goal kick.

John Robertson made his first change of the match on the 56th minute as Charlie Trafford was replaced by David Carson.

Dundee almost had their second just before the hour mark as Paul McGowan dribbled through the middle and into the box but the Dundee midfielder saw his effort go narrowly past the post.

On the 64th minute, Cammy Kerr drove into the box and unleashed an effort but it went over the bar.

With around 15 minutes remaining John Robertson made his final two changes of the match as Nikolay Todorov and Mitch Curry replaced Jordan White and Mitch Curry.

Shortly after coming on, Mitch Curry couldn’t continue through injury after a collision with Jack Hamilton. With no subs left, Caley Thistle were down to ten men for the final five minutes of normal time.

On the 87th minute, James Keatings almost found Carl Tremarco at the back-post but the captain was inches away from meeting his cross.

Dundee held on to win the game and they progress to the last 16 as Group D winners.

John Robertson told the BBC: “We’re disappointed but don’t really have any complaints. I thought the first half was pretty even, if you take the chances created in the game, Mark Ridgers has had two great saves and Johnson has put one over the bar when he should score.”

“The goal is disappointing, Mark Ridgers has put his hands up and he’s said should save it. That’s what Dundee had first-half and a lot of stuff around the box. We had the same, Jack Hamilton had three great saves. The block to stop James Keatings is incredible, what a piece of defending that is because that was probably the best chance of the first-half.”

“The Keatings free-kick goes inches past the post, we’ve had a header, so apart from the goalkeeping mistake I didn’t think there was much in the first-half.”

“In the second-half, both sides really stopped each other, there wasn’t many great chances for either side. Then we had to take chances and in the last ten minutes they had two great chances to kill the game and they should have if we’re being honest.”