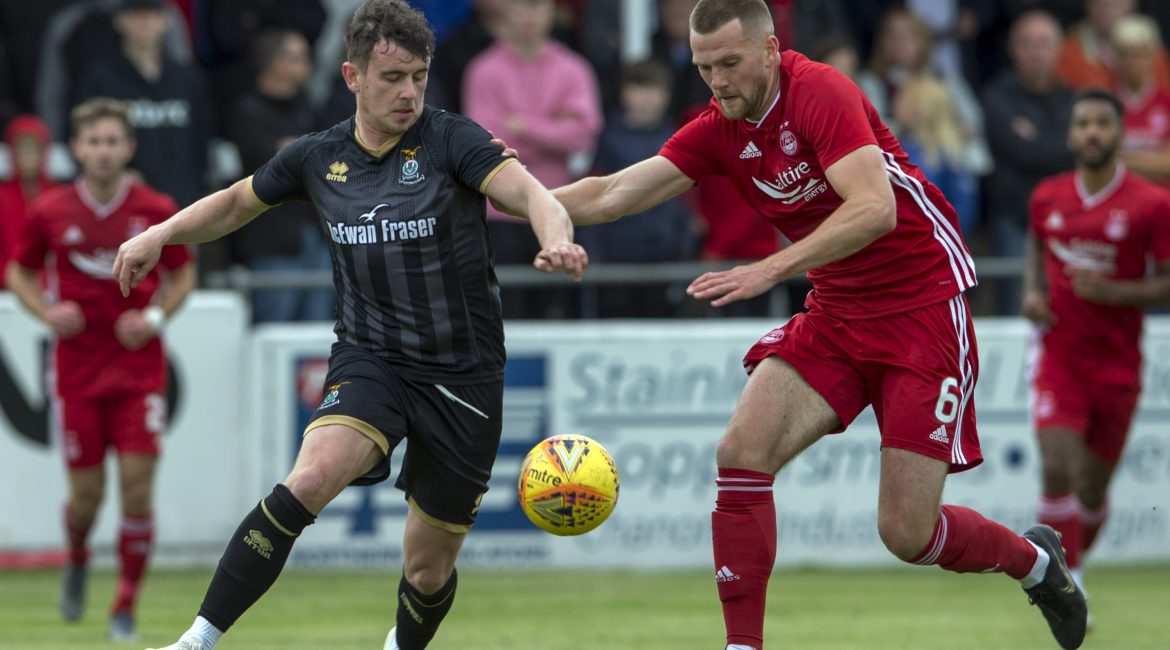 Caley Thistle drew 1-1 with Aberdeen at Borough Briggs as preparations towards the start of the Betfred Cup Group Stage continue.

Curtis Main opened the scoring for the Dons from the penalty spot after 60 minutes but Brad Mckay leveled the game after 70 minutes as he converted Jordan White’s flick on from Tom Walsh’s corner.

The game started with an injury as Shaun Rooney went down by the touchline in serious pain and limped off after 5 minutes. He was replaced by Coll Donaldson.

The Dons had the first chance of the match after 7 minutes as Scott Wright capitalised on a short back-pass from Coll Donaldson and played in Curtis Main but his effort was held by Cammy Mackay.

Main had another chance after 20 minutes as he was played in by Connor McLennan but Cammy Mackay was quick off his line to prevent the Aberdeen striker.

After 28 minutes, Charlie Trafford played a brilliant ball to Aaron Doran who saw his chipped effort go just over.

Aberdeen had a chance just before the break as Joe Gallagher fired over the bar from just outside the box.

In the second half, Niall McGinn went close for the Dons just before the break. Nikolay Todorov replaced Cameron Harper after 60 minutes.

Aberdeen were awarded a penalty after 61 minutes as Todorov fouled Gallagher in the box.

Curtis Main stepped up and converted the penalty to put the Dons 1-0 up.

After 69 minutes, Tom Walsh saw his free-kick deflected behind for a corner.

The resulting corner was swung in by Walsh, flicked on by White and Brad Mckay prodded it home at the back-post to make it 1-1.

Caley Thistle made a treble sub on the 75th minute as Mitch Curry, Roddy MacGregor and Jack Brown were replaced by James Keatings, Kieran Chalmers and Matheus Machado.

With around ten minutes left, Machado saw his effort delfected behind for a corner after he cut inside from the left.

In the closing stages, Tom Walsh did well down the left hand side as his cross was just missed by Keatings and the ball then fell to Chalmers who fired wide.

In the last minute, Cammy Mackay produced a fine save to keep out Andrew Considine and keep the score at 1-1.

John Robertson said: “It’s a moral boosting result, because we’ve played four Highland League sides and now we’ve deliberately taken three tough matches against Aberdeen, Hearts and St Johnstone ahead of the League Cup group section. We want to be tested, in the Highland League games we’ve had a lot of the ball and have been trying to break teams down, today was the opposite we had to work really hard asa defensive unit.

“You see the quality of players Aberdeen have got, you see the one’s that have started and the one’s that are coming on. Our defence and midfield had to work really hard, but it started at the front as the frontmen gave them a platform to defend from. From our point of view, the exercise was very very good, we tested ourselves against a top team and we had to hang in there for long spells but we’ve done it.”

“We also had three or four of our own youngsters that we given the opportunity, I thought Cameron Harper at left-back was outstanding , Roddy MacGregor showed when he’s available what he can do, young Jack Brown, an Aberdeen lad, battled away hard in the middle of the park and you also had wee flashes of Machado coming on and young Kieran Chalmers.”’

Shaun Rooney had to be replaced after five minutes, John Robertson said: “Yeah, it was just on the halfway line. There’s a wee hole on the pitch there and Shaun’s foot caught on it and twisted it. We’ll assess it, we’re hopeful it’s nothing more than a twisted ankle, it may be ligaments so it may rule him out for a wee while. We don’t know right now, the swelling is up too much at the moment.”

“Dave Carson was touch and go for today so he’ll come into the equation for Monday against Hearts. James Vincent isn’t far away, Sean Welsh and Daniel MacKay will return to training next week. We’re starting to clear up a few injuries with boys coming back in and the target is to see how many we have for the game against Peterhead.”