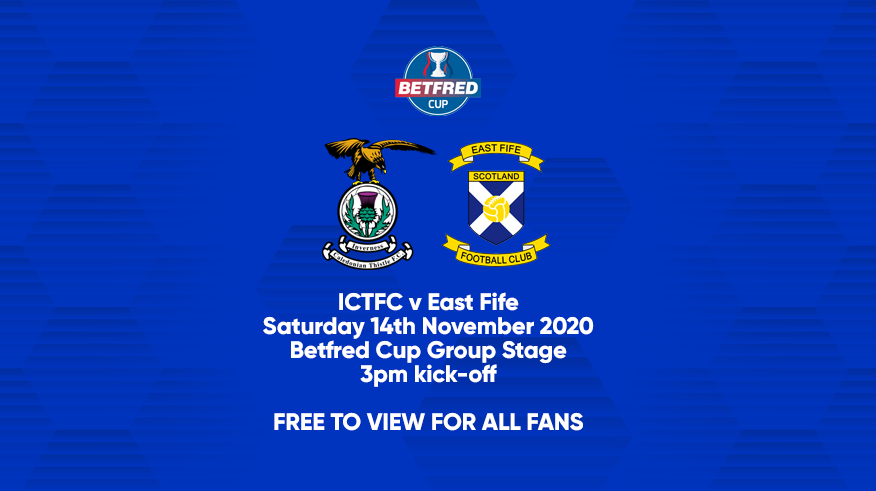 The club is pleased to announce that we have been able to make tomorrow’s Betfred League Cup match with East Fife free to view for ALL fans, both home and away.

We would like to thank the East Fife FC Chairman James Stevenson for agreeing to this gesture and also the excellent SPFL Matchcentre team who have worked with us to make this technically possible.

“It’s been a tough group, you just need to look at all the results. East Fife beat Cowdenbeath by two goals and Raith beat East Fife by two goals, which is the biggest winning margin.”

“It’s been a tough group and extremely tight and I don’t see Saturday being any different. East Fife were unlucky in the end not to get a result against Hearts, they probably deserved a point for their last 20 minutes.”

“We’ll go into it to try and win the match. We said before the Raith game that we’ll try to continue to build momentum, we had a very good performance against Raith and were unlucky not to win.”

“We want to carry that into Saturday and give as much game time as we can to players that haven’t had as much and are returning from injury.”

“Every match we go into we want to win and this Saturday is no different.”

John Robertson said: “Brad Mckay rolled his ankle with nobody near him against Raith, we thought that was what he came off for but apparently someone landed on his foot.”

“James Vincent looked like a hamstring injury, but Karen Gibson our physio had diagnosed it may be more of a nerve problem so hopefully isn’t as bad as first thought but I don’t think either James or Brad will make this weekend.”

“I think Wallace Duffy is struggling also. It gives other people opportunities, Miles Storey trained this week he may make the bench this Saturday, hopefully. ”