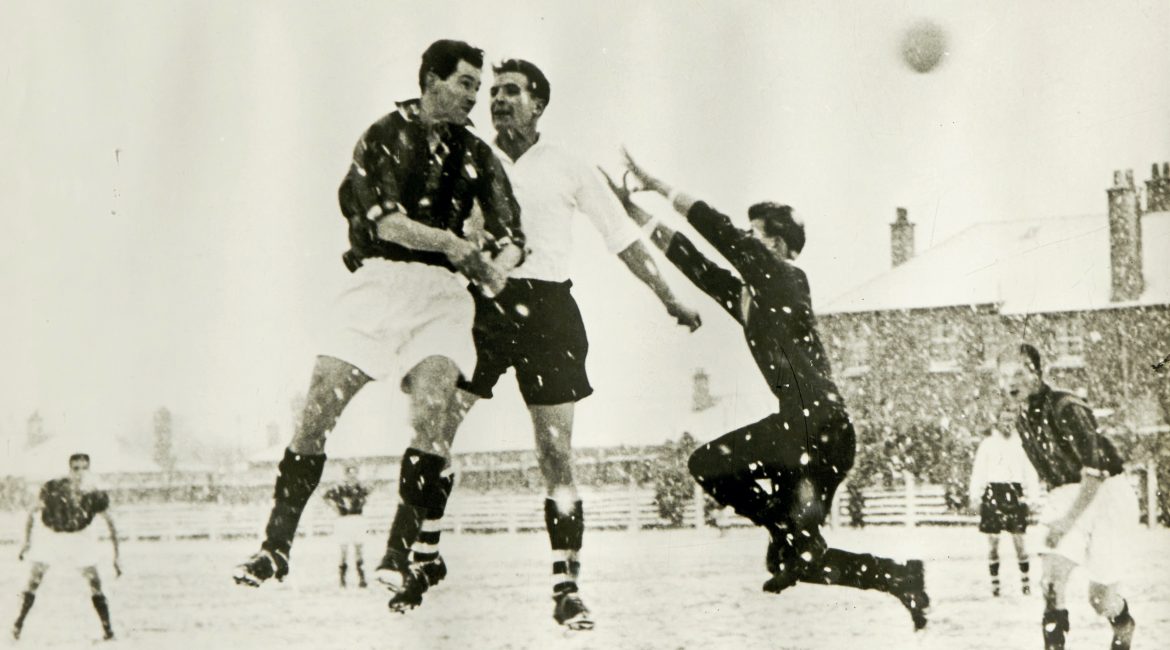 Photo: An aerial dual in a Thistle v Clach game at Kingsmills in the 60s

Memories of Inverness football down the years are being captured in a project being launched on Friday (27 May).

Inverness Caledonian Thistle Community Trust are promoting the project which builds on the monthly meetings held at Caledonian Stadium when older members of the community meet to recall football memories.

The Trust is being supported by Clachnacuddin FC and High Life Highland in carrying out in-depth research of the senior clubs who have played in Inverness since the game began to be played in the Highlands in 1885, including Citadel FC, who were one of the first teams formed but folded in 1937, Inverness Thistle and  Caledonian, who merged in 1994, Clachnacuddin and Inverness Caledonian Thistle..

The project aims to conduct interviews with players, officials and supporters, produce an online catalogue of photos, film and memories and the ultimate aim is to mount a public display of memorabilia.

An appeal for memorabilia will be made at the launch, which will take part at the May monthly meeting of the Memories Club.

High Life Highland are offering advice on specific elements of the project through their management of the Highland Archive Centre, Inverness Library, Inverness Museum and Art Gallery and Am Baile, the community web site.

The first phase of the project is an Inverness Football Memories feature on Am Baile, featuring photographs, film and stories of all the sides being covered in the research.

Gordon Fyfe, Joint Chair of ICT Community Trust, said: “This is a project that builds on the success of our monthly meetings, which aim to revive memories from the past in a friendly social setting.

“There are excellent sources of information in existence through the books written to record the histories of the various clubs.  We aim to bring all the information together and provide a well-researched history of the game in the city in an entertaining way.

“The first phase of the project is the launch of Inverness Football Memories on the Am Baile web site and over the coming months we will continue to populate the site with more stories, photos and film.  Then we will roll out other elements of the project as and when funds become available.  Our ultimate aim is to mount a display of memorabilia.”

Gordon, who played for Caledonian in the 1970s, has been working with fellow ICT Community Trustee, Dave Milroy, who played more than 900 games for Inverness Thistle, Peter Corbett, who played for all three Inverness sides and managed Caley and Clach, and Alex Chisholm, Chairman of Clachnacuddin, in taking the project to this stage.

Alex comes from a family steeped in the history of Clach.  His grandfather was the Grand Old Man of North Football, George B Rodgers, and his dad was the tough tackling left half and former chairman of Clach, Ally Chisholm.

Alex, who played for Clach, said: “We are delighted to be involved in this project.  It has been fun looking out the photographs of the Clach teams down the years and the trophies won.  It highlights the rich history of this club and I’m sure many Clach fans will enjoy reviving memories of some great times when they view Inverness Football Memories on Am Baile.”

Steve Walsh, Chief Executive of High Life Highland, said: “This is an excellent project which will be of huge value to our community.  We are delighted to be partners, by providing advice and support from staff at Am Baile, the Archive Centre and the Inverness Museum and Art Gallery.”

Bill McAllister, who has covered Highland League football for more than 50 years, is carrying out the research.  Bill is a keen historian and wrote the book “The Highland Hundred” to mark the centenary of the Highland League in 1993.

Anyone with a photograph that they would like to feature on Am Baile should contact ambaile@highlifehighland.com or mail/deliver it to Am Baile, Highland Archive Centre, Bught Road, Inverness IV3 5SS. It will be returned to you. Am Baile can also be found on Facebook (@ambaile) and Twitter (@HighlandHistory)

The Inverness Caledonian Thistle Community Development Team would be happy to deal with any enquiry about the gifting or loaning of memorabilia and will safely and securely store any item ahead of a display being launched. The contact email address is: mark.watson@icttrust.org.uk