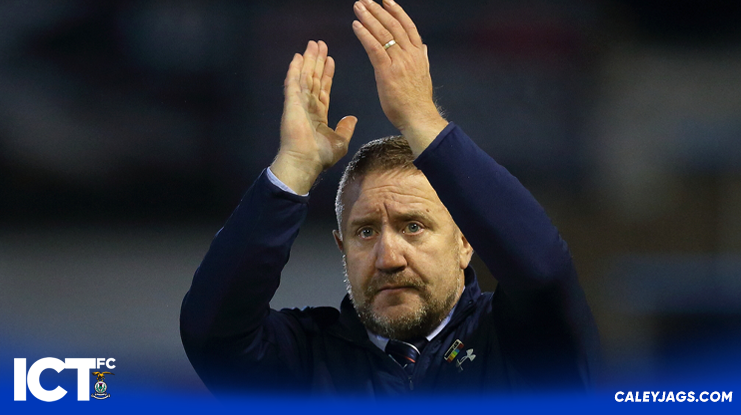 The club is delighted to announce that 1st Team Manager John Robertson has agreed a new 2 year contract extension that will see him at the helm at Caledonian Stadium for the next 3 seasons and until at least the end of season 2022/23.

Speaking to our media team CEO Scot Gardiner said “I could not be happier to get this extension to John’s contract finalised. He has played a pivotal role in rebuilding the football team since his return to Inverness and has overseen year on year improvement.”

“He led a team and a squad ravaged by a traumatic relegation to 5th place in his first season back, just missing out on the play-offs at the death, having already led the club to victory in the Irn Bru Challenge Cup Final.”

“In his second season back he took ICT to the Semi-Final of the Scottish Cup and only lost out to Dundee United in the Premiership Play-Off Semi-Final having finished 3rd in the Championship. “

“This past season he led us to the Quarter-Finals of the Scottish Cup and we were in 2nd place in the Championship when our season was called off in March, having held that position for virtually the entire season.”

“The subsequent lockdown was a real blow to our plans as we were quietly confident we could go on and win promotion to the Premiership. John achieved all of this while consistently rebuilding the squad in all three seasons and always doing so within a budget that was nowhere near the largest in the division.”

“I cannot think of a better man to be leading the club through the testing times we have ahead of us and thanks to his planning we still have an excellent group of players here at Caledonian Stadium. I feel confident that together we will be able to get us back to where we need to be and where we feel we belong.”

The Manager himself said, “I came back to Inverness with the ambition of getting us back to the Premiership and in fairness I knew that it would take a lot of work and no small amount of football luck and it has probably been something of a rollercoaster since my return.”

“We have lost some key players due to budget constraints but I knew that would happen given the fallout from relegation and the lack of finances available in the Championship and it only made me work harder. That said, I know we are getting closer to achieving our goal and the faith that Ross, Scot and the Board of Directors have shown in me gives me further confidence that we can continue to improve if we stick together.”

“I am just about over the disappointment of losing out on our chance to win promotion via the Play-Offs through no fault of our own but having been out and about in the community during the lockdown as part of our TogetherNess campaign, I can see how much the club means to the fans and how much we all want to achieve success again at the club. I will continue to give my all to get us back into the top tier of Scottish football and I can’t wait to get the boys back on the training pitch.”

Chairman Ross Morrison also expressed his delight at the news of John’s contract extension saying “John has been a leader on and off the field since his return and speaking personally, since taking up the position of Chairman, I have really enjoyed working with him and I have seen up close and personal just how much the success of the team and the club means to him.”

“The Board and I were unanimous in approving this extension, something we started discussing as far back as January of this year. I also have great confidence in his relationship with Scot as they work so well together and our respect and confidence in his ability is entirely mutual.”

“When this great news is added to our highly successful PUMA kit launch and our exciting new commercial partnership with new shirt sponsors Intelligent Land Investments, we can now continue to focus entirely on building on the stability and continuity we have worked so hard to achieve.”