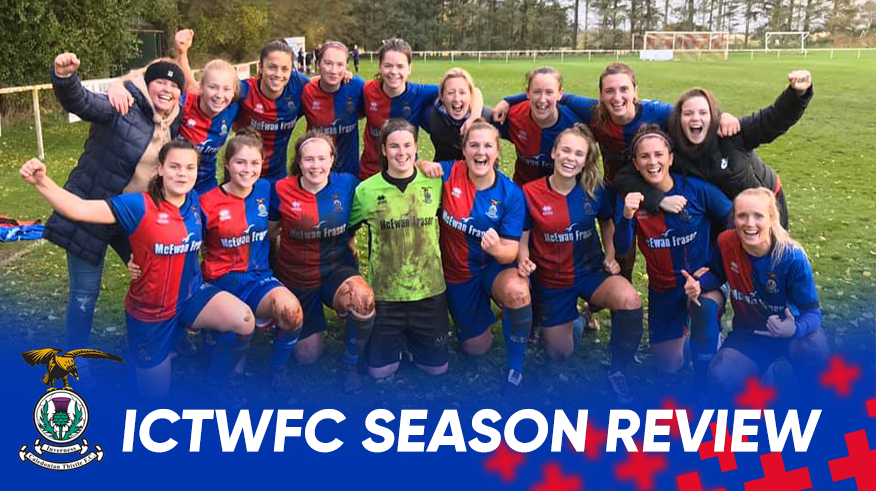 ICTWFC finished their first season in Caley Thistle colours as they came from 2-0 down to beat Buchan 4-2 away from home, which secured a second place finish in SWFL Division 1 North.

During the 2019 season, ICTWFC scored 133 goals with 19 different scorers! The top scorer was Kayleigh Mackenzie, as the 16 year old enjoyed a fantastic first season in senior football with 23 goals to her name.

ICTWFC Boss Karen Mason looks back at the season:

How do you reflect on your first season as ICTWFC?

“I think our first season can only be seen on the field as a success.  At the start of the year it was our aim to challenge at the top of the table along side Aberdeen, who we knew were coming down with a strong and talented squad and if we could finish the best of the rest that would be a step in the right direction from last season having finished 3rd and building our squad to put a serious challenge for the title in 2020.”

How pleased were you with the team achieving a second placed finish this season?

“I was really pleased with achieving second, although everyone is aware that you don’t get anything for being runners-up, overcoming the difficulties that we have faced with a depleted squad at some points throughout the year and coming away having achieved our goal has been great. The girls all put in an incredible amount of effort throughout the year balancing work, education, and families and it is nothing less than what they all deserve.”

Do you have a particular highlight this campaign?

“There have been a few highlights for me this year, seeing the return to the game for Leanne Calder, seeing Peigi Barker progress from the development squad up to the first team and scoring her first senior goal but I think my personal favourite has to be the team performance that we put in at East Fife away in the first half of the season. Every single player played out of their skins and the football we played was some of the best that we have produced. We dominated from start to finish and scored some cracking goals along the way.“

You had a good Scottish Cup run also this season, how pleasing was that?
“The Scottish Cup was a real bonus for us this season, it wasn’t a priority for us but the fact that we managed to knock out SWPL 2 side Hutchison Vale was really pleasing to show that we can compete with those in the league above us.”

Has there been any standout performers for the team this season?

“We have had some terrific performers this season, I don’t want to give too much away before our Awards Night in November but Megan McCarthy has been solid at the back and a regular starter, captain Lisa Mckenzie always performs to a high standard and youngster Kayleigh Mackenzie has made a real impact up top since joining at the start of the season.”

You have a well deserved break now until the start of the next season in 2020, but have you had any early thoughts about next season yet?

“I am really optimistic about next season, I have a couple of promising youngsters who I am hoping to sign who will add something different to the squad. My next focus will then be retaining the experienced players that we have and trying to convince some who are thinking of hanging up their boots to give me one more season for a push for promotion. I am confident that if this happens then we can go one better than this year.”

The ICTWFC Awards Night will be taking place at 7pm on Saturday 16th November at the Chieftain Hotel!

Tickets are £5, email invernessclfc@gmail.com to book