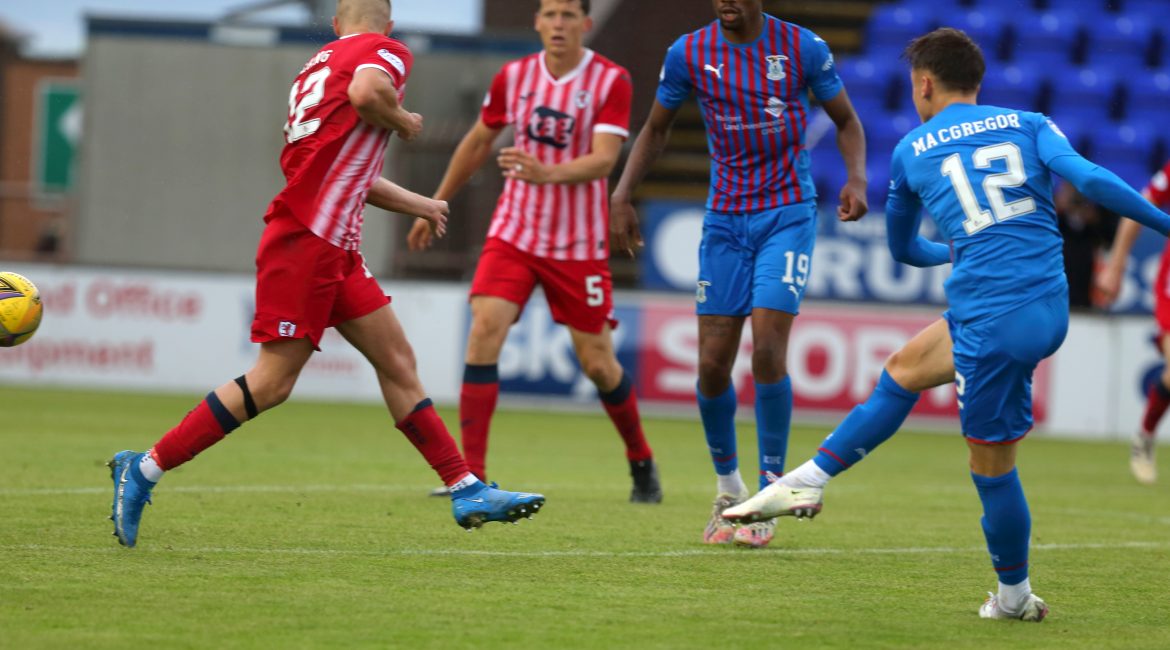 ICTFC maintained their perfect opening record as they secured their second win of  the season in a scrappy tie against Raith Rovers at home.

Second half sub Roddy MacGregor came on to raise the roof with a screamer to win all three points for the Highlanders, winning 1-0. This result keeps the Highlanders in the promotion places at this very early stage of the season.

Raith Rovers arrived at the Caledonian Stadium on the back of their thrilling 4-4 against Hamilton Accies on Matchday One. The Caley Jags were in the mix at the top of the table following their tidy 1-0 win away at Arbroath FC last Saturday.

For their first home game of the 21/22 domestic season, ICTFC made one change to the starting lineup, swapping out Roddy MacGegor for Michael Gardyne. John McGlynn’s side made a few changes in response to their previous draw, changing out Brad Spencer and Lewis Vaughn for Tom Lang and Ross Matthews. In addition to these changes, there were some familiar faces for both competing sides with Manny Duku facing his former team from last season and James Keatings made his return to the Caledonian Stadium starting from the bench, following his Summer move.

With each side equal for long stretches in the first half, the hosts tried to find their way in at the 11th minute. Tom Walsh broke away from a cleared corner in the ICT half and eventually found Gardyne on the left wing with a ball played wide. After cutting inside, his whipped ball looked to find Walsh at the back post but it went out for a corner via deflection. Reece McAlear was posted on the edge of the box to catch any stray clearances to the edge of the box, and the young midfielder was able to guide his attempt just wide of the mark through a crowd of bodies.

Later into the half, David Carson had the time to look up and pick out a cross into the middle that was inches from connecting with Shane Sutherland at the near post. The ball fell to Manny Duku on the follow up but it didn’t sit well enough for the striker to trap the ball and test the keeper in such a tight space.

A moment later, Duku successfully won a high ball against the last two defenders, scrapped for the second ball and seemed to be through on goal before he was taken down by Liam Dick; the defender received a booking for a potential last minute challenge and conceded a freekick 25 yards from goal. Reece McAlear got the ball up and over the wall from the set piece, but Jamie MacDonald was able to come across to save. As the hosts picked up momentum, ICT tried to pick the lock from the flanks with a series of crosses into the box from the far side, with Raith Rovers defenders just about getting in the way each time.

The visitors came close to testing Ridgers from range at the 29th minute. Ross Matthews was teed up from around 20 yards and almost curled a side-footed effort into the top corner, but it drifted just wide of the post on its way. Dario Zanatta had another long range crack with slightly less favourite odds moments later, driving his effort into the stands.

The best clear chance of the half fell to the Caley Jags at the 35th minute as they continued to poke and prod the visitor’s resolve. Michael Gardyne somehow squeezed a slight through ball between the lines and onto Duku’s toes in the box from the left hand side. With the angle closing the Dutchman composed himself and opened his body up to almost bend a right footed shot into the opposite right corner, with only slight touches from MacDonald keeping the score level.

Just before the break, Michael Gardyne managed to guide a left footed cross into the box and Tom Walsh was a whisker away from directing it home, skidding the ball off his heel inches from the far post while under pressure.

After the restart ICT started the second half well with a delicious cross from Gardyne on the far side that skimmed the top of Duku’s head but not enough to direct towards goal. Sutherland then had a give and go on the other side after collecting the scraps and directed a low shot on target from outside the box.

Up next was another attack down the left, with Allardice breaking down a Raith attack and spreading it wide to Gardyne. His cross was deflected off the head of Tom Lang and it fortunately looped and landed on the right side of his own net, just behind the bar.

With the away fans making sure to put pressure on former player Duku whenever he touched the ball, the Dutchman had his chance to wipe the smile off of the away support at the 64th minute. Shane Sutherland slipped through a ball into Duku’s path and his firm drive to the near post at a tight angle was palmed away for a corner.

As the clock ticked on, both sides had their chances to get ahead in the game.

Raith Rovers came close as Kyle Benedictus pushed forward to close down Sutherland in midfield, dispossess him and hit a bending low drive that almost caught out Ridgers from range, with it eventually drifting wide of the left hand post. Then came ICT to have a crack, with substitute Roddy MacGregor carrying a through ball down the left hand channel, looking up and just about finding Gardyne in space in the middle on the edge of the box. The winger was able to turn and shoot but didn’t get the contact he wanted as he scooped his attempt on the spin above the bar on his weaker left foot.

The visitor’s Riley Snow required little time to get involved in the game following his substitution, with Zanatta cutting a ball back from the byline for the midfielder to find the target on his left foot; Ridgers saved comfortably. Another shot came from the left side as Zanatta took advantage of some space to cut inside and curl a tame effort for Ridgers to catch.

The opener would eventually come in spectacular fashion for the hosts. Shane Sutherland found Duku between the lines, who cushioned a ball into the path of Roddy MacGrgeor around 20 yards from goal and the young attacker hit a sweet daisy cutter on the half volley that whistled across the keeper and into the netting of the Raith Rovers’ goal, leaving MacDonald with no chance.

Despite a late substitution to bring on former Caley Jag, James Keatings, Raith Rovers couldn’t break the blue and red wall to grab a share of the points. The game ended 1-0.