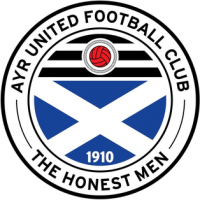 Caley Thistle closed the gap at the top of the Championship to two points as goals from James Vincent and Shaun Rooney secured all three points at Somerset Park against Ayr United.

John Robertson named the same side which was beaten last weekend by Partick Thistle, the only change in the squad was Brad Mckay returning to make the bench in place of Cameron Harper.

The match started in a quick fashion as Miles Storey forced Ross Doohan to tip his effort wide just one minute into the match.

Ayr had their own early chances, Ridgers produced a fine save to deny Moffat one-on-one and was called into action five minutes later as he denied Alan Forrest clean through.

After 23 minutes, a corner fell into the path of Moffat but his shot was held by Ridgers.

After 28 minutes, Sean Welsh was forced off due to injury. Charlie Trafford came on in his place.

Caley Thistle got the breakthrough after half-an-hour played, Shaun Rooney did well down he right hand side and his cross was blocked by Doohan but the rebound fell to James Vincent and he finished it to score his first goal of the season.

In the second-half, Roddy MacGregor was close to opening his Caley Thistle account and doubling the lead after 57 minutes. The young Caley Thistle player capitalised on a mistake from Roscoe but the centre-back got back to win the ball.

Jamie McCart blocked an effort from Daniel Harvie after 59 minutes

After 61 minutes, Shaun Rooney produced a fine block to deny Luke McCowan after the Ayr forward broke clear on goal.

It was 2-0 to the Caley Jags 4 minutes later, Shaun Rooney meet Coll Donaldson’s clearance down the line on the right hand side, and he went on an incredible solo run to slot past Doohan.

Caley Thistle made a couple of subs as David Carson replaced Roddy MacGregor and Nikolay Todorov replaced Jordan White, who looked t0o be carrying a knock.

With 12 minutes remaining, Miles Storey feed the ball to Doran on the edge of the box but the Irishman put his effort over the bar.

Caley Thistle had a couple of late chances, Carson capitalised on a mistake in the Ayr back-line and feed the ball to Todorov but the striker’s effort was blocked.

And in the closing stages, a loose back-past in the Ayr backline played Vincent through on goal but his effort was saved by Doohan.