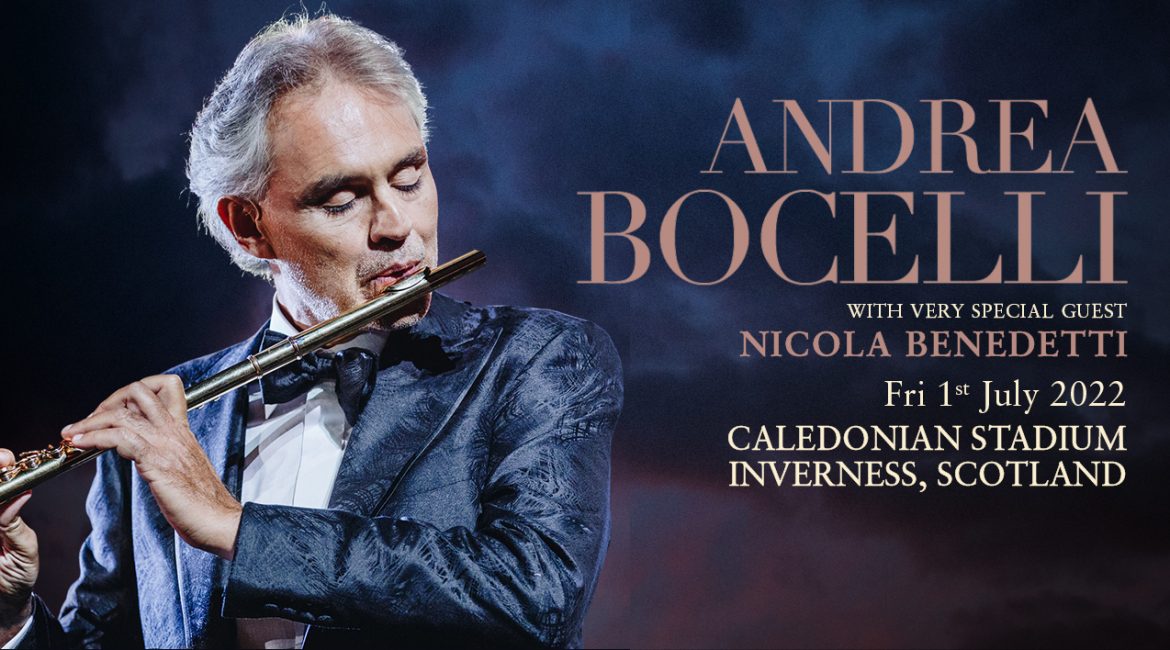 LIVE AT THE CALEDONIAN STADIUM, INVERNESS, SCOTLAND ON FRIDAY 1 JULY 2022

Andrea Bocelli, The defining tenor of our era, live for the very first time in the Highlands of Scotland. Today it was announced that Scotland’s own classical superstar Nicola Benedetti will appear as very special guest on the show.

Bocelli will perform as part of his World Tour during his first visit to the Scottish Highlands for this spectacular outdoor show at The Caledonian Stadium, Inverness, Scotland on Friday 1st July 2022.

Nicola Benedetti said, ‘I’m hugely excited to be playing at the Caledonian Stadium, Inverness for a great crowd in my home country. Thank you so much to Andrea Bocelli for this invitation. I can’t wait.’

Born in Ayrshire, Scotland, Nicola Benedetti is one of the most sought-after violinists of her generation. Her ability to captivate audiences and her wide appeal as an advocate for classical music has made her one of the most influential artists of today.

In April 2021 Nicola gave the world premiere of Mark Simpson’s Violin Concerto with the London Symphony Orchestra and Gianandrea Noseda – receiving critically acclaimed reviews. Winner of the GRAMMY Award for Best Classical Instrumental Solo in 2020, as well as Best Female Artist at both 2012 and 2013 Classical BRIT Awards, Nicola records exclusively for Decca (Universal Music). Her latest recordings of Vivaldi Concerti and Elgar’s Violin Concerto entered at number one in the UK’s Official Classical Album Chart. Other recent recordings include her GRAMMY award-winning album written especially for her by jazz musician Wynton Marsalis: Violin Concerto in D and Fiddle Dance Suite for Solo Violin.

The Highland’s music lovers will for the first time, experience the remarkable voice of the Italian tenor who has been called “The Tenor of Our Time” and famously by Celine Dion “The Voice Of God” !  It is a remarkable voice that touches the heart of listeners, equally whether performing the greatest Italian opera arias or anthemic, classically inspired modern pop.  In his remarkable career he has sold some 90 million albums, taking opera music to a whole new audience, in doing so becoming the biggest selling classical soloist in recording industry history.

“It will be more than a concert: it will represent a personal joy for me, an important debut of my mature career. It will give me the huge privilege to take my voice to one of the most fascinating places on earth, full of history, beauty and poetry.

After this long and difficult time that has shaken all of humanity, going back to the UK will be incredibly emotional: the returning sunshine after the storm. As in the words of the popular ballad I already feel like “My heart’s in the Highlands”!”

This spectacular concert will feature arguably the greatest tenor of our age, in the prime of his vocal talents performing the greatest opera arias of all time.  Andrea will perform with a full orchestra and choir and will be accompanied by a soprano and other guest artists to be announced. The programme will be bursting with passion and romance.

In addition to the great Italian operatic repertoire there will be selections from the Neapolitan and Italian popular song traditions, as well as some new songs from Andrea’s popular repertoire, and notably some debut live performances of songs from the new album “Believe”.

It is a huge feather in the cap of the club, the City of Inverness and indeed the Highlands of Scotland.

Andrea Bocelli is a world star who has made the crossover from being the most loved tenor on the planet to being known to music fans the world over and we are honoured to be hosting his incredible World Tour in Inverness. I am sure that music fans from all over Scotland and beyond will flock to see this fabulous concert.“

Bocelli’s performances are always an occasion.  He has performed at venues including The Eiffel Tower, The Statue Of Liberty, The Pyramids, The Leaning Tower of Pisa and in the Vatican City. His performances have graced internationally televised events from The Euro 2000 Concert in Rotterdam to the 2006 Winter Olympic Closing Ceremony, to The Oscars, The Grammys and Live 8. On March 22, 2019, the President of the Italian Republic invited him to hold a concert at the Pauline Chapel in the Quirinal Palace in Rome, for the state visit to Italy of the President of the People’s Republic of China, Xi Jinping.

He has sung at numerous galas, for US Presidents to British Royalty, and his poignant duties have included singing at events from the Vatican Millennial celebrations, where he performed the official hymn marking the new millennium, to the memorial service held at the site of World Trade Centre, where he was asked by Mayor Giuliani to sing Ave Maria.  He even had the great personal honour of singing during the wedding service of fellow Italian tenor, the legendary Luciano Pavarotti.

‘Believe’ the new album and livestream concert from Christmas 2020, follows Bocelli’s record-breaking ‘Music for Hope’ performance at Easter from the historic Duomo cathedral in Milan which was watched live by millions around the globe. As one of the biggest musical livestream performances of all-time and with over 3 million peak concurrent viewers, it achieved the largest simultaneous audience for a classical livestream in YouTube history. The video received more than 28 million views from across the globe in its first 24 hours.

Believe, co-produced by Steven Mercurio and Haydn Bendall, is a selection of songs that have inspired and sustained Bocelli over the years. There are duets with Alison Krauss and Cecilia Bartoli – two singers whose distinctive voices are celebrated around the world – plus a previously unreleased track from the late, great Italian composer Ennio Morricone, as well as ‘Gratia Plena’ – the closing song from the critically acclaimed new movie, Fatima. Bocelli has also composed his own settings of ‘Ave Maria’ and ‘Padre Nostro’ specially for this record.

The themes explored in this new recording are deeply personal to Bocelli, who says, “The concept behind ‘Believe’ is based on three words: faith, hope and charity. These are the three theological virtues of Christianity, yet – quite independently of any religious belief – they are also the three extraordinary keys to giving meaning and completeness to the lives of every one of us.”

Musically gifted from birth, Andrea Bocelli is one of the most celebrated singers in modern history, performing at major international events including the Olympic Games and the World Cup, as well as his own sell-out arena shows around the world. He has a Golden Globe, seven Classical BRITs and seven World Music Awards under his belt, plus a star on the Hollywood Walk of Fame. His previous album, Si, reached No.1 on both the US and UK charts.

With a decorated career spanning more than a quarter of a century, having amassed millions of fans around the world with his emotive and instantly recognisable voice, Bocelli has collaborated with a host of A-list stars including Luciano Pavarotti, Ariana Grande, Jennifer Lopez, Christina Aguilera, Ed Sheeran, Dua Lipa, Céline Dion, Tony Bennett, Alison Krauss and many more.

Ultimately, Bocelli understands that all music is good for the soul in a way that taps into the most subtle nuances of humanity, irrespective of individual belief: “Good music brings with it a powerful message of peace and fellowship, teaching us about beauty, and helping us to open our hearts and minds.”

While he may have the popular touch, Bocelli retains critical respect.  Gramophone, the bible of classical music identifies Andrea Bocelli as “one of the most natural, graceful and relaxed tenors of today” praising his “powerful tenor of distinctive timbre“, his “elegant tones“, his “fine unwavering definition“, his “remarkable breath of phrase“, delivered “beautifully sustained” and “without a suspicion of strain“. Respected US classical critic Richard Dyer states simply; “Bocelli is The Real Deal“.

Tickets are on sale online now at www.ictcc.co.uk