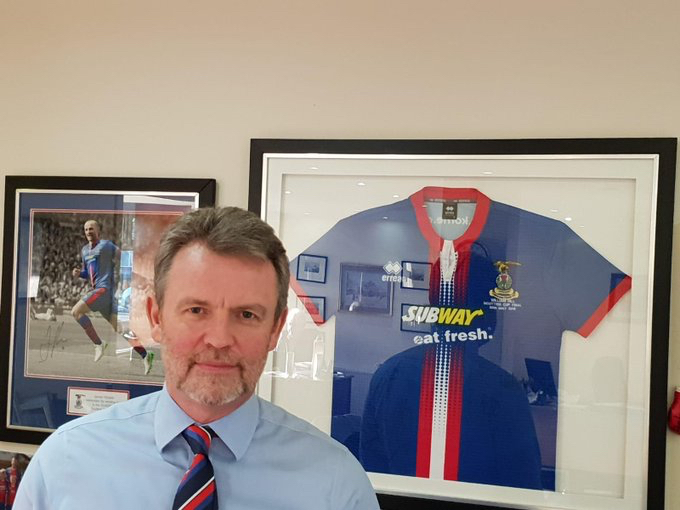 Following the successful club AGM on Tuesday night held at the Caledonian Stadium, Supporters and Shareholders that could not attend can find the Chairman’s statement from the AGM below

On Friday 13th March 2020 the club was in 2nd place in the Championship. Then the world changed. Prior to that day, the new club Board of Directors was working well with Allan Munro and David Cameron returning to the fold to help us reshape our business in order to reposition the club finances to such a degree that we would become self-sustainable no matter how the team performs. We had made great strides towards reducing our losses which, in all honesty, were not only unacceptable but unsustainable for any business.

Sitting comfortably in 2nd place on March 10th 2020, the team were bang on track to have an exciting run in and a very serious push to get into the Premiership and 2nd place was in fact above our target for budget purposes. Manager John Robertson his staff and squad were in a good place football wise but then the football world shut down. An emergency Board meeting was quickly arranged on the morning of Saturday 14th March as we tried our best to look into the future and come up with a strategy which would see us through this crisis. Little did we know how bad things would get or how long it would last.

Towards the end of March and the beginning of April, the word furlough was introduced into the lexicon of the world of football, as well as to the rest of the country. The club was fastidious in the use of the scheme as at that stage and as we had been completely shut down as an organisation we did not know when we would be able to open again, let alone play football. We duly applied for the available and varying UK and Scottish Government grants, some successfully and frustratingly and at the time, worryingly, some not.

The two concerts scheduled for June, a sell out Westlife and fast selling Tom Jones, which were potentially very profitable for the club were cancelled. A major financial let down.

The lockdown also caused a very swift review of the business and the club moved quickly to upgrade our IT systems in order to allow us to be able to operate safely and remotely. Some of the £50,000 we received from the very generous Scottish Football benefactor James Anderson was used to help this transition. This however would ultimately lead to our new Commercial Director Keith Haggart, signing up one of our new business suppliers Converged, as the official IT Partner of the club.

A new season ticket package was launched which was based on the then generally held belief that fans would only be absent from the first 3 games of the new 27 game season. This belief influenced our thoughts re the Pay Per View offering which in hindsight, may have been different had we known that there would only be two games throughout the entire season that would see us house fans and even then, only at 300 at a time. I truly believe that had we known this at the beginning of the voting process in the summer, clubs may very well have not voted to play at all. The costs of putting on matches for no fans while paying everyone and all expenses was onerous in the extreme without any revenue.

There was constant uncertainty and the parameters under which we had to operate were almost intolerable. These were certainly strenuous for our staff and Management, which would manifest itself in horrific fashion later in the season but I will stick to the reporting on the year in relation to this accounting period.

The year ended with us entering into the worst medical crisis the world has seen for generations and this clearly had an effect on our year-end figures and this financial shortfall can be attributed to the following:

Reduced League and Cup dividends, even though we heroically made it to the quarter final of the Scottish Cup v Hibernian; little TV money, lower season ticket sales, smaller home crowds and substantially fewer away supporters coming to Inverness and of course, the shutdown of the season in March, therefore no play-offs/chance of promotion.

The Board continued to focus on our excellent youth academy and community outreach programmes. With the support of the parents of our academy boys, we launched a voluntary donation scheme which works monthly and the take up has been hugely encouraging and helpful to the club. I am proud to say that even during lockdown, our parents have continued to help us with very little drop off in contributions. I am very thankful to everyone and it helps us to underwrite the onerous costs to run a full time academy but also helps us to continue to secure the sustainable future of the Club giving local highland boys a pathway into professional football. Especially as we had additional costs as we transitioned from Errea kit into the new Puma deal signed by CEO Scot Gardiner.

With regards to our Academy, we continue to outperform numerous clubs across Scotland, many with budgets much larger than our own. The night of our Scottish Cup tie v Buckie Thistle, we had 9 Academy boys in our team/squad that night while across the Highlands, there were 6 in the Brora Squad which won the most famous victory in the history of Scottish football!

Further to this we are all incredibly proud to see what we believe is another first in Scottish football with 4 of our young players, 3 of them Academy boys, (Roddy McGregor, Dan McKay, Robbie Deas and Cameron Harper, being named in the Scotland U21 squad for the first time ever.

The new Puma kit has been hugely successful with record sales numbers of home and away jerseys helping to contribute to us reaching our annual retail target after only 5 months of going on sale. Our striking pink away shirt partnership with Highland Hospice also captured the imagination and hearts of many. I am pleased to say that we will be extending this deal for season 2021/22.

To continue to improve business performance, ICT needs to continue focusing on providing a good experience for supporters, providing professional sponsorship opportunities and sweating the asset which is Caledonian Stadium and we have been going out to market both locally and internationally for a naming rights deal for the Stadium. The plan for setting up of an ICT Concert Co, which allows the club to place the Stadium on the international concert map has gone ahead. The partnership with Intelligent Land Investments which will not only see the company name on our kit which will transform our south car park and hopefully our future remains extremely important and transformational.

The CEO and our Directors have worked tremendously hard to secure new pathways to a self-sustainable future. We approached old and new faces to help us on this journey and while not all approaches were successful, we are pleased with the progress so far and the future continues to look promising and even bright, despite all the last 15 months have thrown at us.

In conclusion, I would like to thank our shareholders, our season ticket holders, and all of those fans, current and lapsed who stepped up to answer our TogetherNess campaign when the lockdown came. Thanks to everyone who contributed cash and goods, our players and staff were able to deliver hundreds of essential food packages to the elderly who were hit particularly hard by the lockdown our and on behalf of the Board, I thank our fans and indeed our staff, for their continued support and encouragement. In unprecedented circumstances we have come a long way in the last year or so. Faced down some extremely difficult circumstances and we are moving in the right direction as a club and a business.