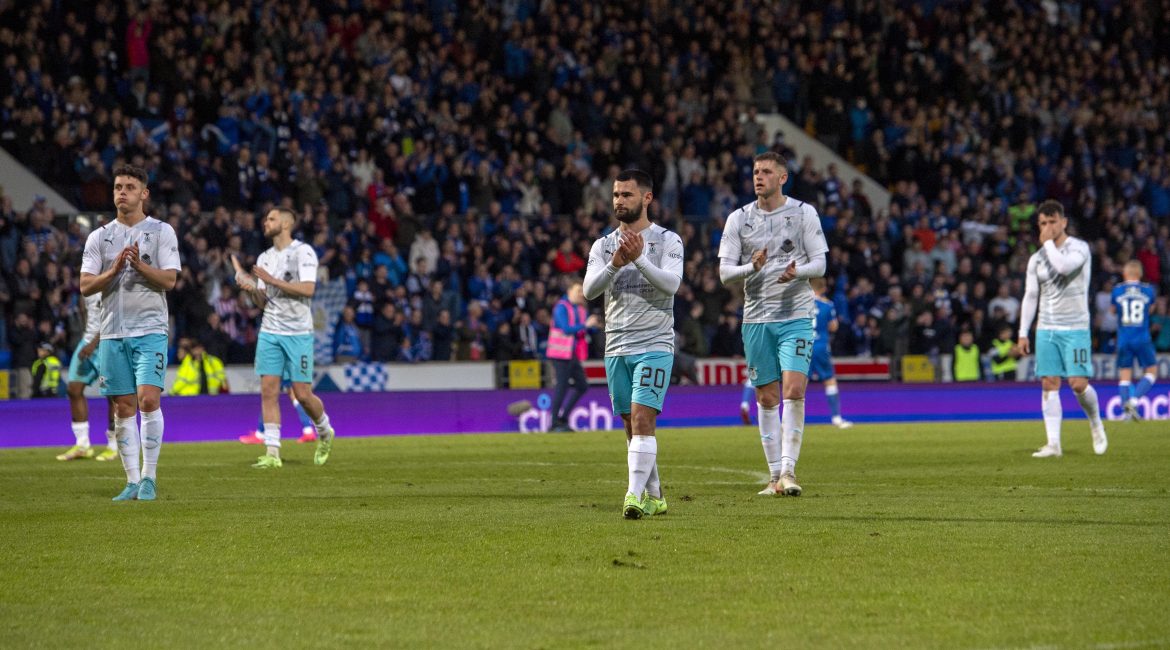 ICTFC fell short of promotion at McDiarmid Park, failing to repeat a second come-back against St Johnstone having initially conceded two goals in the early stages of the second half.

A close range goal  from Stevie May and a deflected shot from Cameron MacPherson put the Saints in the driver’s seat, and when ICT tried to roll the dice for a way back in late into the game, a third  and fourth suckerpunch goal from Calum Hendry and Shaun Rooney killed off all hope of a miracle.

Despite this tough defeat, the Highlanders should be proud of their run to get to the position. Taking the toughest route possible, they beat Patrick Thistle and Arbroath FC over two legs and arrived into the second leg of the promotion Playoff all-square, having battled back from a two-nil deficit to arrive in Perth with everything to play for.

Going into the game, Billy Dodds was able to select from a larger pool of players. Shane Sutherland was unavailable due to injury, but the gaffer was able to restore Danny Devine and Wallace Duffy to the starting lineup, both having served their suspensions from the away tie in Arbroath. Switching from a 3-5-2 to a 4-3-3, David Carson was shifted into midfield to support Sean Welsh and Reece McAlear in the middle, with Logan Chalmers and Austin Samuels flanking Billy McKay up top.

Jamie McCart was swapped out for John Mahon in St Johnstone’s only change to the team that started at the Caledonian Stadium.

Approximately 2,000 boisterous fans followed the Caley Jags down the road, having bought out four of their allocations, ensuring that there’d be plenty of noise to carry them forward.

For long stretches of the first half, ICT imposed their will on the fixture with the bulk of the chances. Just before the 1st minute, the boys in white settled their nerves with a half-chance via Chalmers. Robbie Deas cut a ball back to the winger on loan and he directed a low shot at Clark’s left hand post.

Continuing to pressure their defence, ICT almost got ahead at the 7th minute through some pressing from Chalmers. A pass back to Dan Cleary 25 yards from his goal was quickly closed down by Chalmers from behind. The centre back rushed a pass back to Zander Clark but because of a bobble, the GK almost sliced the ball into his own net, fortunately settling for a corner.

Near the midpoint of the first half, Logan Chalmers won a direct GK into the host’s territory and found Billy McKay in the middle, whose right footed shot from range was comfortably grabbed by Clark.

The visitors continued to enthusiastically hunt down and win first and second balls. Billy Mackay shrugged off an aerial challenge at the 28th minute and played a perfectly weighted through ball down the channel for Samuels to latch on to. With a tight window to aim for on the stretch, the striker poked a shot on target at the near post before the referee blew for a foul on the follow-up.

Trying to jump start St Johnstone’s game after the break, Callum Davidson swapped out Glenn Middleton for Stevie May up top.  And the substitute immediately put the hosts ahead just before the 46th minute. An inswinging cross from the left hand side by Brown was met by Callum Hendry with a glancing header and it was parried away by Mark Ridgers on his line. Stevie May was alert for the scraps and fired home on the rebound from six yards.

Seven minutes later, the home team extended the lead with a fortunate second. Cameron Macpherson took a touch from around 25 yards on the left before hitting  a drive that took a massive deflection off of Sean Welsh on the stretch and wrong footed Ridgers in goal.

The Caley Jags still tried to find a response through some neat play at the 61st minute.  Reece McAlear and Austin Samuels had a give a go to pick their way through a field of blue shirts, with the latter carving out a shot on target down to the right hand side of the goal, which was parried away.

Six minutes later ICT continued to ask questions of the defence; a corner from substitute Aaron Dorans was knocked down for Devine to have a whack, but his half volley was blocked. And then Deas gathered the ball down the left flank, finding McKay to set up Dorans in the box in space, but his effort was scuffed off target.

With the clock ticking, Billy Dodds dug deep into his bench to stack the field offensively in ICT’s favour but that left some space behind to exploit.

St Johnstone’s Callum Hendry pounced on a slipped in through ball from Hallberg to beat the offside trap and close down Mark Ridgers in goal. The attacker chipped the shotstopper to extend the lead and add gloss to a deceptive scoreline.

A fourth goal was added in an almost identical fashion. Daniel Cleary roamed into acres of space from the backline, and with four players supporting him, he found Shaun Rooney to his right to set him up for an identical goal to the third, dinking a diving Ridgers.