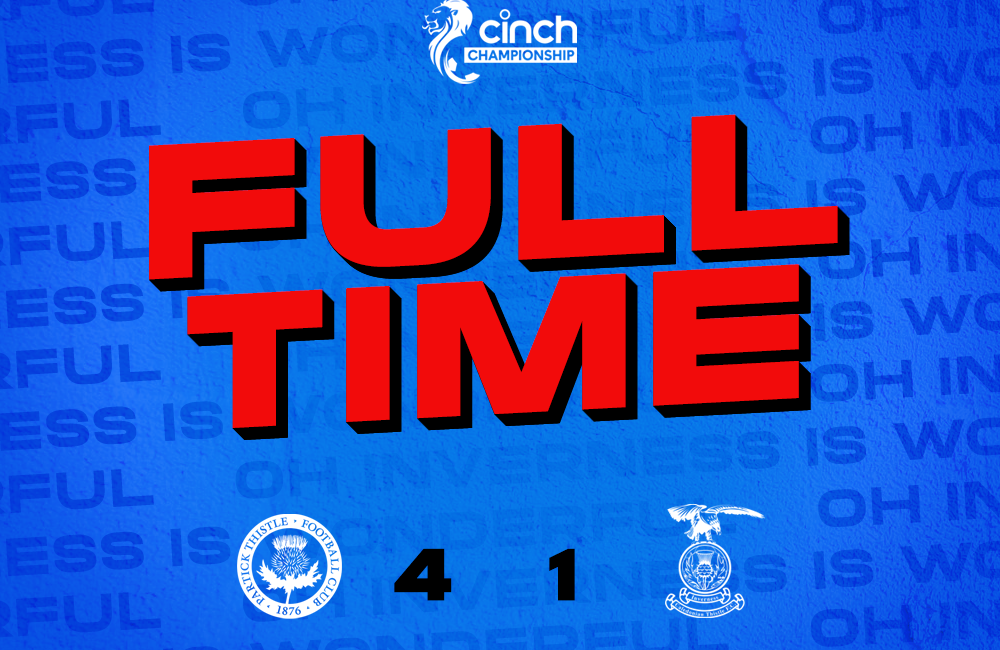 Caley Thistle fell to their first league defeat of the season as they were beaten 4-1 by Partick Thistle at Firhill.

A brace from Brian Graham in the first-half followed up by Kevin Holt’s penalty and a bullet header from Anton Dowds in the second-half gave Partick Thistle all three points.

Caley Thistle striker George Oakley pulled one back for the Caley Jags in the closing stages of the match.

Head Coach Billy Dodds named an unchanged side to the team which beat Cove Rangers 4-1 last weekend with Wallace Duffy and David Carson returning from injury to take a place on the bench.

The home side started brightly and should’ve had the lead after the opening minute, as Scott Tiffoney produced some fine play down the left side and set up Cole McKinnon in the box, but the midfielder’s effort was wide.

Scott Alalrdice saw his shot go just over the bar from the edge of the box as ICT tried to get a grip of the game.

Scott Tiffoney continued to cause problems for the Caley Jags as some fine play down the left resulted in his goal bound effort being cleared off the line by Cameron Harper.

The home side were rewarded for their good start and took the lead after 20 minutes through Brian Graham. The striker got on the end of a low cross from Cole McKinnon after the Rangers loanee met Steven Lawless’ pass.

Billy Mckay had a good chance to level for Caley Thistle after he met Aaron Doran’s knock down in the box, but his shot was well saved by David Mitchell.

The home side doubled their lead after 35 minutes as Brian Graham grabbed his second of the evening. Scott Tiffoney capitalised on a loose pass from Robbie Deas and the winger squared the ball to Brian Graham who made no mistake from close range.

Head Coach Billy Dodds rung the changes at half-time as he took off Lewis Hyde and Aaron Doran for David Carson and George Oakley.

Brian Graham had his chance for a hat-trick after 50 minutes, as he was played through on goal but Mark Ridgers was equal to his attempted chip.

Partick Thistle were awarded a penalty after 58 minutes as David Carson was judged to have fouled Scott Tiffoney. Kevin Holt stepped up to take the spot kick and converted past Mark Ridgers to make it 3-0 to the home side.

Partick Thistle added a fourth goal after 84 minutes. Harry Milne’s cross met Anton Dowds in the middle of the box and his header flew past Ridgers to make it 4-0.

In added time, George Oakley pulled one back for Caley Thistle as he headed home from Cameron Harper’s corner.