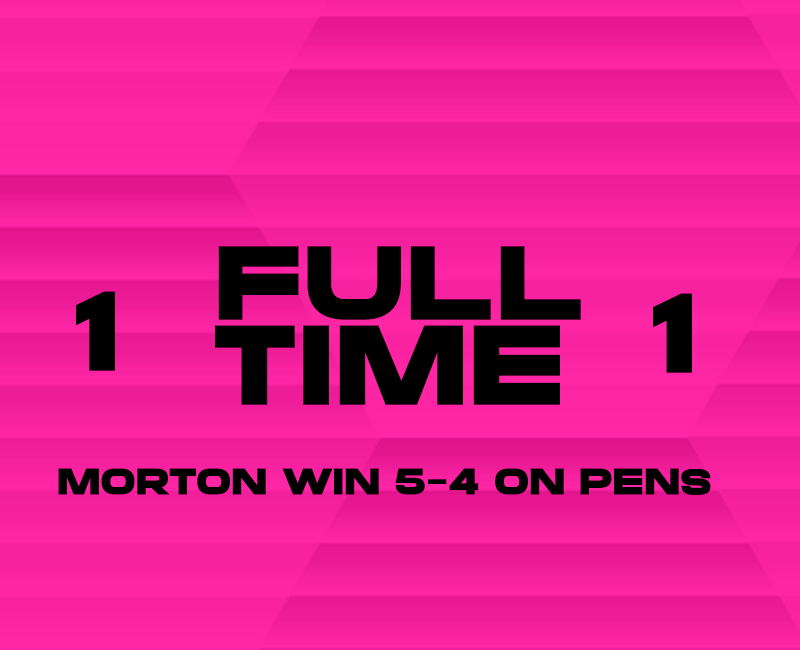 Caley Thistle exited the Scottish Cup after a penalty shootout defeat against Morton at Cappielow.

Robbie Muirhead gave Morton the lead on the stroke of half-time but Danny Devine levelled for the Caley Jags straight after the restart.

Head Coach Billy Dodds named an unchanged side from the team which beat Kilmarnock 1-0 at the Caledonian Stadium on Friday night.

Caley Thistle had the best chance of the opening exchanges. Great work from Shane Sutherland saw him play Aaron Doran through on goal but his shot from inside the box was kept out by Jack Hamilton.

After 18 minutes on the clock, Gozie Ugwu saw his effort go wide of the mark form a Morton counter attack.

With almost 30 minutes played, Captain Sean Welsh was forced off due to an injury and was replaced by Tom Walsh, which saw Roddy MacGregor move into a deeper role.

With 37 minutes played, Tom Walsh almost made an instant impact after coming on. He met Aaron Doran’s cross in the middle but the substitutes’ effort from a tight angle was kept out by Jack Hamilton.

The ball was then partially cleared by the home side and Walsh turned the the provider this time for Doran but the Irishman saw his shot form inside the box blocked on route to goal.

Morton had the lead before the break. Striker Robbie Muirhead curled the ball past Mark Ridgers following a Morton counter attack to open the scoring.

Caley Thistle started the second-half strongly and levelled the tie after 47 minutes through Danny Devine. The centre-back met Aaron Doran’s whipped in free-kick in the middle and got a deft touch on it to take it past Jack Hamilton and make it 1-1.

Just before the hour mark, substitute Tom Walsh got the ball in a central area and shot but his effort palmed behind for a Caley Thistle corner.

Danny Devine had to produce some great defending to keep the game all level. The centre-back produced a big block to deny Gozie Ugwu’s effort from reaching the goal and the rebound fell to Muirhead but his effort was held by Ridgers.

With only 5 minutes remaining on the clock, Jack Hamilton needed to be alert to turn Aaron Doran’s cross behind for a corner. From the resulting corner, Shane Sutherland header was saved on the line by Jack Hamilton.

With the score level at full time, the game went to a penalty shootout.

That left it down to Danny Devine and Gary Oliver. Unfortunately for the Caley Jags Devine saw his penalty saved while Gary Oliver converted to send Morton into the Fourth Round.