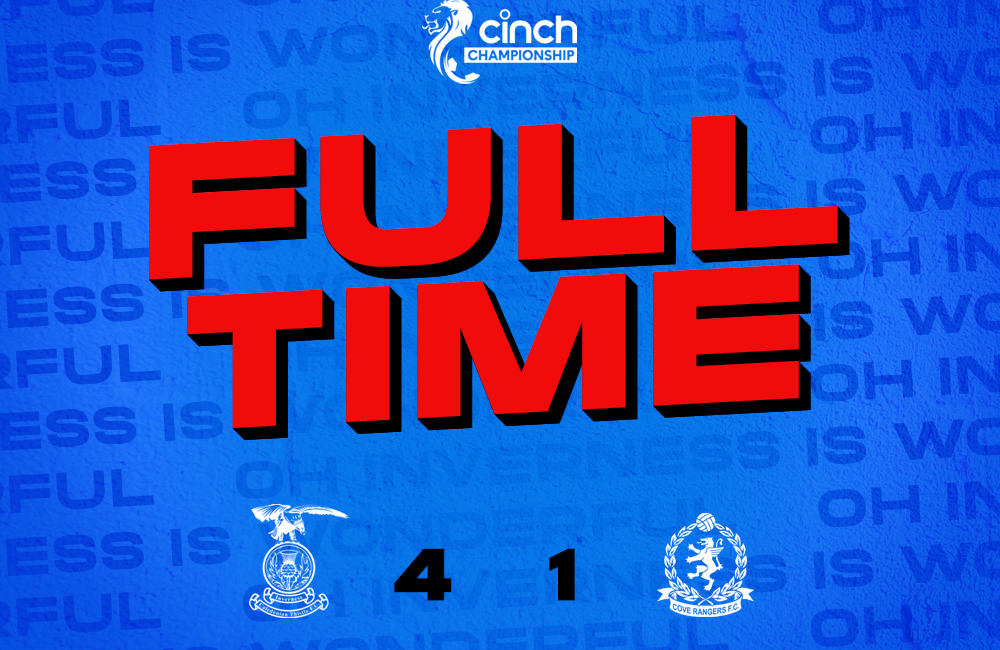 Caley Thistle cruised to their first league win of the season, beating Cove Rangers 4-1 at the Caledonian Stadium.

Head Coach Billy Dodds was without Danny Devine, David Carson and Wallace Duffy with injuries while Nathan Shaw and George Oakley dropped to the bench from last week’s draw with Arbroath.

Caley Thistle started brightly as Robbie Deas found Cameron Harper with a great pass and the left-back’s low effort from inside the box was turned behind by Kyle Gourlay.

The breakthrough came after just 6 minutes on the clock, a great pass from Aaron Doran played Austin Samuels through on goal and the striker showed great composure in front of goal to finish past Kyle Gourlay.

Caley Thistle pressed for a second as Daniel MacKay, Billy Mckay and Aaron Doran all saw efforts saved by Kyle Gourlay while at the other end Mark Ridgers had to be alert as he produced a fine save to prevent Zak Delaney from heading into his own net.

Caley Thistle got their second goal just after the half-hour mark. Daniel MacKay produced some fine skill down the left side and his effort from just inside the box was turned in by Aaron Doran from close range.

Cove boss Jim McIntyre made one change at the break as Iain Vigurs replaced Morgyn Neill. The visitors got a goal back in the first minute of the second-half as Fraser Fyvie clipped Mitch Megginson through on goal and his effort was well saved by Ridgers but Robbie Leitch was on hand to turn in the rebound, to pull a goal back for Cove.

The visitors goal didn’t phase Caley Thistle as they pressed to restore their two goal advantage. Scott Allardice went close as he connected with a corner while Billy Mckay had an effort of his own but he fired it over the bar.

The third goal came after 74 minutes, Cameron Harper’s cross found Billy Mckay in the box and he found fellow striker Austin Samuels in the box as he turned it past Kyle Gourlay.

The fourth came in added time as Nathan Shaw scored his first goal for the club. Steven Boyd picked out Austin Samuels through the middle but the striker’s shot was saved, as he was in search of a hat-trick, but the rebound fell to Nathan Shaw and he fired the ball into an empty net.