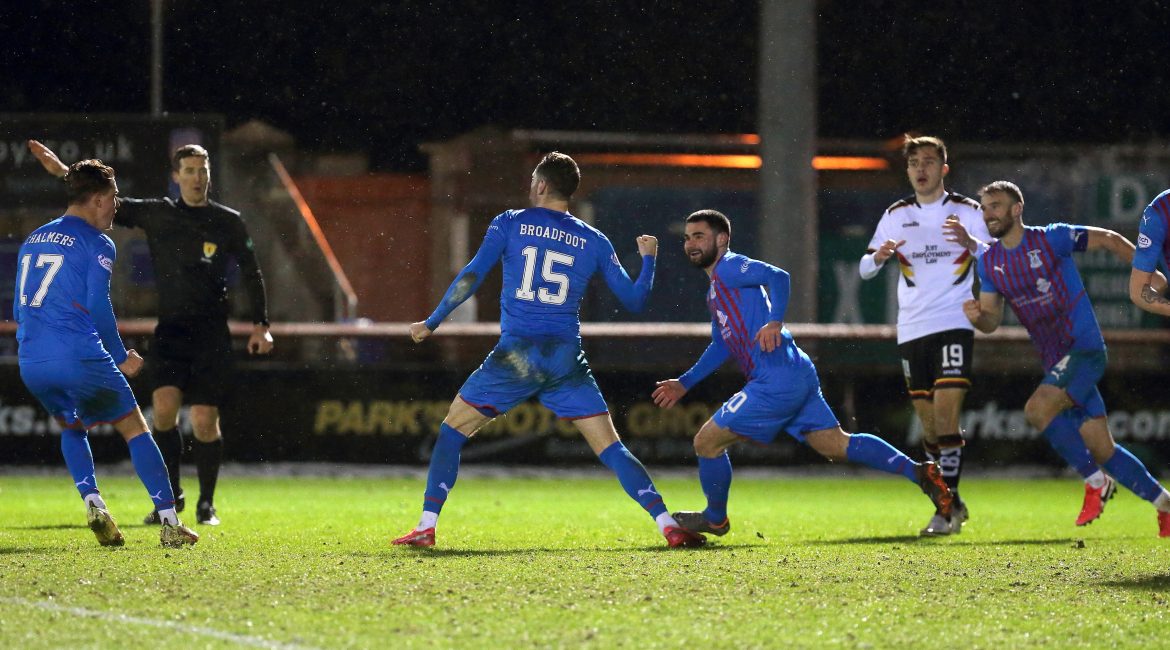 Kirk Broadfoot’s 90th minute equaliser earned Caley Thistle a point as they had to come from behind on three separate occasions as they drew 3-3 with Partick Thistle at the Caledonian Stadium.

Billy Mckay and Shane Sutherland were also among the scorers for Inverness as Brian Graham got a hattrick for the visitors.

Head Coach Billy Dodds made one change to the side which lost 1-0 to Morton on Saturday. David Carson replaced Logan Chalmers.

The game was seven minutes old when Partick Thistle had the lead. Scott Tiffoney did well down the left and his cross found Brian Graham in the box, and he stabbed the ball past Mark Ridgers to open the scoring.

It took Caley Thistle just 12 minutes to get back level. David Carson’s fantastic cross found Billy Mckay free in the box and he volleyed past Jamie Sneddon to restore order.

After 27 minutes the victors were ahead again. It was in a similar manner to the opener as Scott Tiffoney did well down the left hand side again and his cross found Brian Graham in the middle and he headed past Mark Ridgers from close range.

Moments later, Ridgers had to alert as he parried Scott Tiffoney’s effort away from danger as Robbie Deas got the rebound clear.

Right on the stroke of half-time Caley Thistle got level for the second time in the match. Reece McAlear’s corner was a dangerous one and it found Shane Sutherland at the back-post and he headed past Jamie Sneddon to make it 2-2 at the break.

Both sides remained unchanged after the restart. Caley Thistle started the second-half brightly and McAlear looked to cause problems again with his corner but this time Broadfoot couldn’t quite turn it goal wards after 58 minutes.

The visitors were awarded a penalty kick with twenty minutes remaining. Robbie Deas fouled Robbie Crawford in the box leaving the referee no choice but to point to the point.

Brian Graham stepped up and fired his penalty down the middle to secure his hat-trick and put Partick Thistle ahead for the third time in the match.

Caley Thistle responded well to going behind once again. Almost immediately after coming off the bench, substitute Cameron Harper combined with Logan Chalmers and the left-back saw his effort saved by Jamie Sneddon.

The post denied Sam Pearson from his first Caley Thistle goal with 15 minutes remaining on the clock. Welsh’s cross was headed into the path of Pearson at a tight angle and he hit the ball sweetly but his effort came off the post and went behind.

Billy Mckay then had a big chance to make it all square. McAlear won the ball in the middle of the pitch and found Pearson and flicked the ball onto Mckay on the edge of the box but it went just wide of the mark.

Caley Thistle did get a deserved leveller in the 93rd minute. McAlear swung the ball into the box, after his initial corner was cleared, and his cross met the head of Kirk Broadfoot and his effort went past Sneddon to make it 3-3.