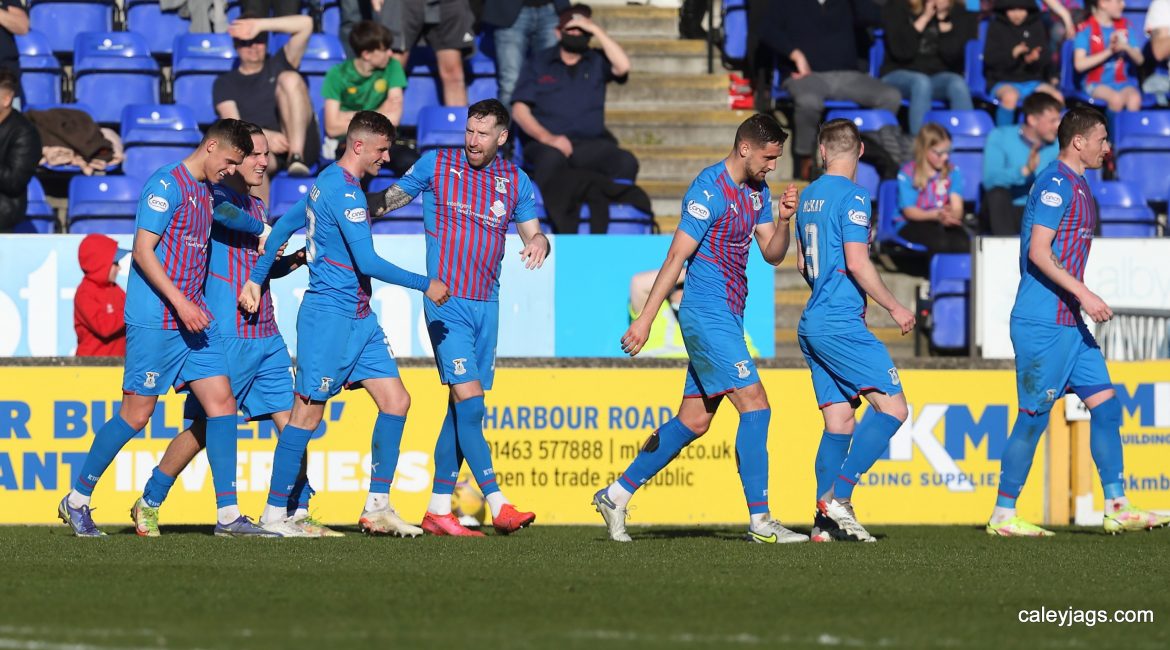 Caley Thistle made it three wins in a row to move four points clear in third place in the cinch Championship thanks to a stunning goal from Reece McAlear and Austin Samuels’ first goal for the club.

Head Coach Billy Dodds made two changes to the side which beat Raith Rovers last week with Logan Chalmers, after his double last week, coming in alongside Wallace Duffy for Joe Hardy and Danny Devine, who were both forced out of the squad due to injury.

Caley Thistle started brightly and Logan Chalmers had the first chance early as Deniz Mehmet got down low to keep out his strike from the edge of the box.

Another good move from the Caley Jags soon followed as Robbie Deas’ ball met Aaron Doran in the box but his effort bounced just wide.

Doran was the creator again after 22 minutes as his corner broke back to him and he swung the ball back in for Billy Mckay at the back-post but his shot was sliced wide.

Aaron Doran went close to opening the scoring himself.  The ball broke the Irishman after great play from Billy Mckay down the right side but his half-volley was narrowly wide of the post.

Reece McAlear was inches away from giving Caley Thistle a deserved lead at the break. He saw his free-kick from around 25 yards come off the crossbar and the rebound was gathered by Mehmet.

McAlear did get the opener after 58 minutes. Captain Sean Welsh saw his free-kick hit the wall and rebound fell to McAlear about 25 yards out at an angle on the right hand side and he rifled the ball into the top corner and past Mehemt to open the scoring in stunning fashion.

Just after the hour-mark, Cameron MacKay was called into action. MacKay pulled off a fantastic save with his feet to keep out Nikolay Todorov’s effort as he met Ryan Dow’s cross in the middle.

MacKay was called into action again as he denied Ryan Dow from point blank range after Coll Donaldson’ effort deflected into the winger’s path.

The three points were secured after 77 minutes as substitute Austin Samuels scored after just replacing Billy Mckay. Samuels was played through on goal by Billy Mckay and he produced a calm finish past Mehemt to make it 2-0.

Caley Thistle now have to wait until 9th April for the next game as Queen of the South are involved in the SPFL Trust Trophy final next weekend meaning our league encounter with them has been rescheduled for April 19th.