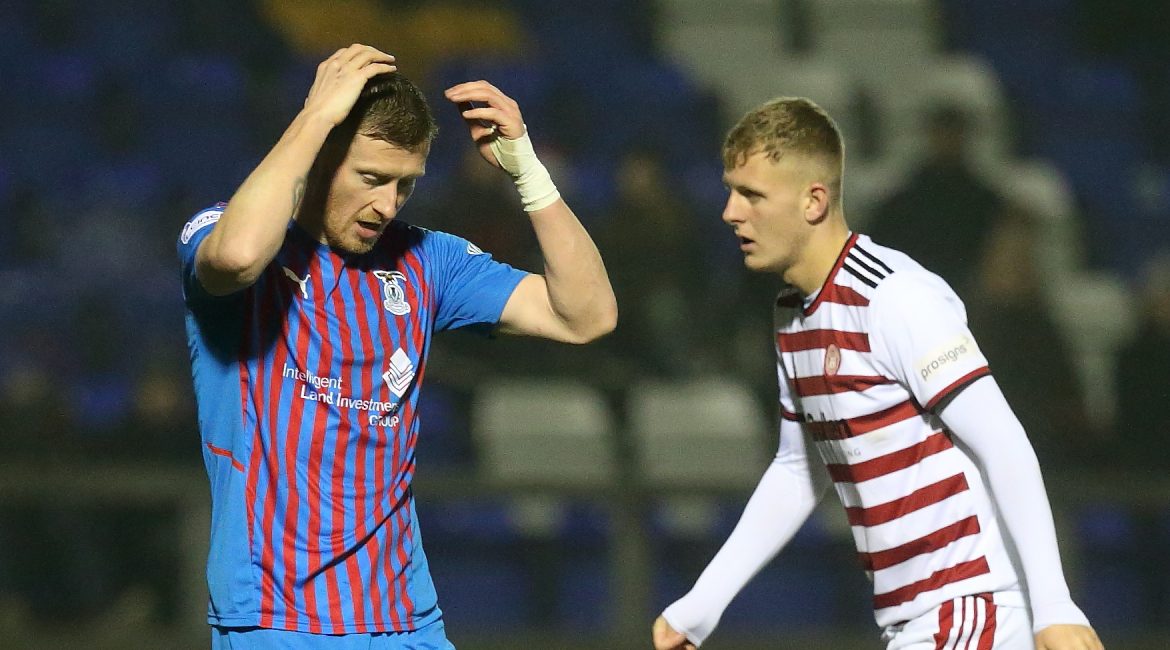 Caley Thistle were beaten 2-1 at the Caledonian Stadium by Hamilton Accies.

Substitute Cameron Harper gave the home side the lead in the second-half, however Hamilton got goals from David Moyo and Andy Winter to take all three points.

Head Coach Billy Dodds named an unchanged side from last weekend’s 6-1 win against Morton at the Cappielow.

The first real chance of the match fell the way of Aaron Doran as shot from range but he saw his effort held by Hilton.

In a tight first-half, Accies had a chance of their own through Kyle Munro, as he met Andy Ryan’s cross in the box, but his effort was well over the bar.

After 30 minutes, Scott Allardice saw his long range effort deflect behind for a corner. From the resulting corner, the ball broke to Tom Walsh just inside the box but his effort was fired well over the bar.

Aaron Doran was forced off with a thigh injury after 38 minutes and was replaced by Cameron Harper, who filled in on the left hand side of midfield.

Mark Ridgers was called into action in the final moments of the first half as he had to collect David Moyo’s shot.

Caley Thistle started the second-half brightly, Reece McAlear saw his shot deflected behind for a corner after 50 minutes.

The resulting corner was cleared and worked out to David Carson on the righthand side and he put a great cross into McAlear’s path but his header bounced just wide of the mark.

Caley Thistle continued to knock at the door, on the hour mark Shane Sutherland went close as he met a great ball from Harper in the middle but his inventive effort just bounced wide of the mark.

On 65 minutes, Caley Thistle got the breakthrough. Shane Sutherland drove through the middle and released Billy Mckay on the lefthand side of the box, and his low cross found Harper free in the middle to fire past Hamilton to open the scoring. The goal was Cameron Harper’s first league goal for the club.

Two minutes after getting the breakthrough, Caley Thistle had a big chance through Shane Sutherland to make it 2-0. Sutherland was played through on goal by Tom Walsh but the striker was denied by the feet of Hilton and Hamilton then cleared the danger.

Hamilton then got back on level terms after 78 minutes. Accies saw a corner on fall to Popescu in the box but his effort was blocked, the ball was then cleared but Hamilton kept the pressure on and Mimnaugh’s ball met the head of David Moyo in the box and his header made it 1-1.

Accies were soon ahead, after 82 minutes Andrew Winter met Mullin’s corner in the box to head past Mark Ridgers.