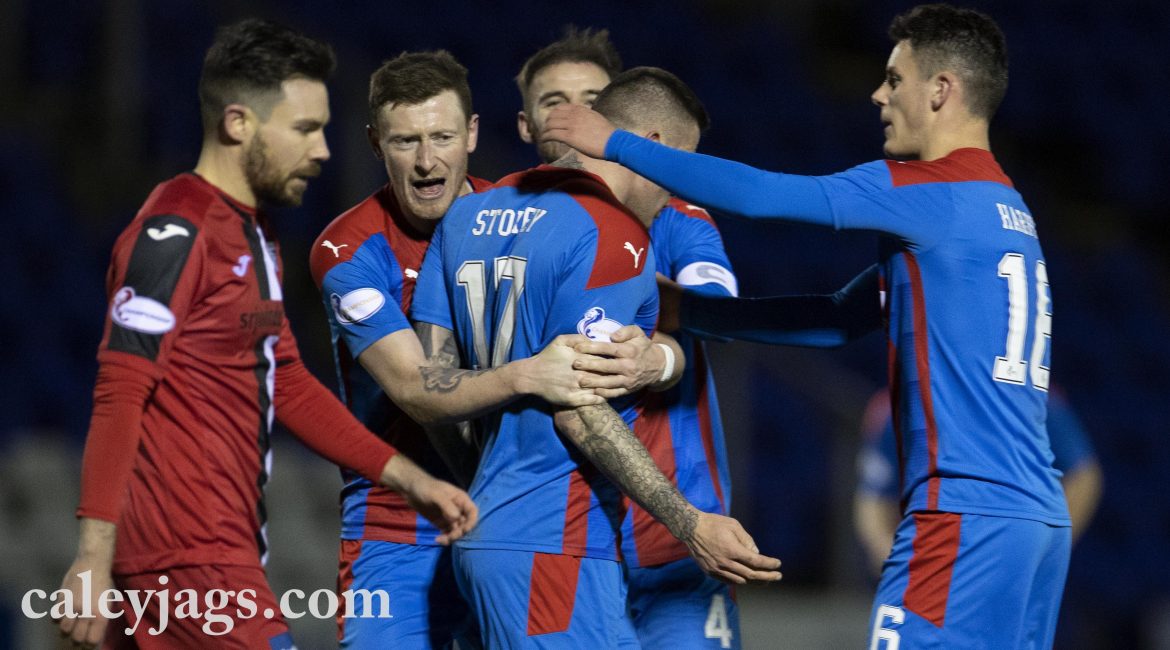 It was an end to end affair at the Caledonian Stadium as ICTFC and the visiting Dunfermline were forced to share the points in a high tempo attacking display.

Kyle Turner cut onto his left foot to bend a shot into the bottom corner for the game’s opener in the first half for the visitors. But not to be outshone, Miles Storey answered the Pars with an equally well taken shot on his left peg into the top corner from outside the box. The game finished level 1-1.

The first attempt on goal came from an unlikely source. Robbie Deas bombed forward to join up with a quick attacking move in Dunfermline’s half at the 2nd minute and took aim from a slightly tight angle, left of the goalposts.

The centre back managed to keep his shot down in the box on his left peg but didn’t provide enough pace to beat former Caley Jag, Owain Fon Williams at his near post.

The Pars came within a whisker of beating Mark Ridgers up at the other end moments later. Iain Wilson drilled a low cross in the box from the left hand side, which was neatly flicked on by defender Euan Murray at the near post with the outside of his foot. The ball brushed the net, but not on the intended side, going out for a goal kick.

Both teams continued to poke and prod for the opening goal with increased intensity throughout the half. Eventually it fell to the visitors to go ahead in the score, having been previously frustrated by blue and red shirts around the box.

Dunfermline had a series of shots in a couple of seconds to test Ridgers and when it eventually rebounded to Kyle Turner on the edge of the box, the midfielder cut onto his left foot and bent a shot into the far bottom corner away from Ridgers to open the score.

Up the other end of the park, Aaron Doran teed up Cameron Harper on the left wing, and his whipped cross met the head of a rising Shane Sutherland in the air. If the header was inches lower, Fon-Williams would be picking the ball out of his net, but instead smashed the crossbar.

Michael Turner had another chance to cut inside to add a second at the 26th minute, but this time a stretched leg from the defence put enough on the ball to kill the momentum and for Ridgers to have an easy grab.

The visitors continued to knock on the door as Lewis McCann’s blocked shot was cleared and fell to Kerr McInroy to hit a first time shot just wide of the mark.

Shane Sutherland would be cursing his luck as he was again denied during a quick attacking break. The striker lined up an ambitious shot from range on a counter attack and forced Owain Fon Williams to tip over, with the shot dipping alarmingly on target.

ICT continued to pile pressure on the Pars back line up until the break, hitting a series of crosses that Dunfermline struggled to deal with.

Collecting a cleared ball from the far side, Cameron Harper chucked in a cross that was met by Miles Storey, but couldn’t get enough on the ball to direct it on target at the back post.

Despite the attacking intent from ICTFC either side of half time, Dunfermline almost scored again close to the restart.

Kerr McInroy attacked space up to the 20 yard mark and then found O’Hara in the box, but his shot was blocked and cleared away.

ICT continued to try to test the away goal at the 54th minute. James Vincent shielded the ball in the box and knocked a pass back to an on-rushing Sean Welsh, who kept his shot down but smashed it wide of the mark from around 25 yards.

The Caley Jags got their leveller after 67 minutes, a long throw from Brad Mckay landed to Storey 20 yards from goal and the striker picked his spot to fire home from outside the box and into the upper left corner to score the equaliser.

The visitors were still adjusting to a recent substitution, and the English striker more than took advantage with the space to get his second goal of the season.

The tempo from both sides continued at its strenuous pace as each side frantically tried to stay warm during the cold and to gain the advantage.

Harper cut inside and out of tackles to attempt a shot on goal from a tight angle, had to settle for a corner on the deflection. Next Brad McKay looked up to bend a cross into the box from opposite side five minutes later, but Sean Welsh’s shot from the outside of the box first time was skid over the bar.

Then Dunfermline almost scored from a cross fired with pace into the box, with no red shirt able to convert from close range.

The game ended 1-1 with both sides leaving everything they could on the pitch.