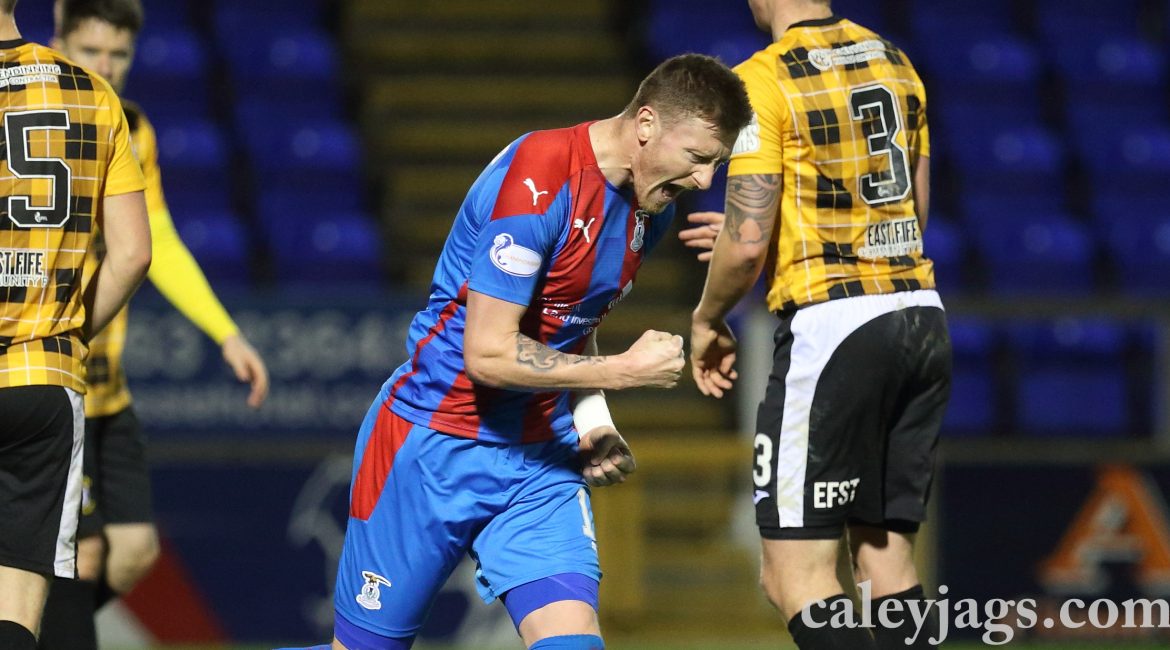 ICTFC finished their Betfred Cup group on a high with a 1-0 win against East Fife on Saturday. Shane Sutherland powered home a close range header from a corner in the second half to separate the sides, but Cammy Mackay was kept busy with a late penalty save to keep the score ahead.

Minutes after kick-off, ICT tried to open the visitors up to create opportunities to score. Shane Sutherland and Aaron Doran neatly flicked the ball to each other around defenders on the left hand side, with the latter player eventually dinking a floating cross to the back post. Nikolay Todorov was lurking there in open space to cushion it down for a teammate, but was ruled just offside as he met the cross.

In another early attack, Shane Sutherland dummied a pass from Roddy MacGregor that allowed Kai Kennedy to cut inside and try a left footed drive to the near post, but East Fife’s Jordan Hart got down low to save.

Sutherland then rode a tackle moments later to slide a pass to Todorov in the box, but his shot was blocked off by Higgins who quickly closed him down.

At the other end of the pitch, The Fifers tried to pressure the Caley Jag defence in a series of attacks. Ryan Wallace’s deep back post cross from the far side of the pitch forced Cameron Harper to stay alert and clear for a corner, with Jack Hamilton waiting for a close range finish.

When East Fife managed to work a loose ball from a blocked freekick to the left hand side to cross, Wallace met the pass with a window of space to take aim, but belted his volley well over the bar from around 15 yards from goal. Three minutes later, some neat one-twos in a break up the park eventually gave Wallace another chance to have a go from range and he again felt frustrated as his shot went high and wide over Mackay’s goal.

As the first half grew a little older, the hosts tried raising the pressure with a series of intrusive passes between Doran and Kennedy around the opposition box. Spotting an opportunity, Kai Kennedy cut inside from the wings to try an effort from the left hand side and when that was blocked by a defender, Roddy MacGregor had a pop from range, seeing a similar result as it deflected into Hart’s arms.

The first half ended goalless, thanks in part due to the supreme effort of Cammy Mackay in goal. From a set piece, Stewart Murdoch nodded the ball across goal to Chris Higgins, who managed to direct an effort on target from around six yards. Normally that would be rippling the net, but Cammy spread himself wide to somehow block the attempt with a combination of body parts to keep the scorelines level.

Two minutes into the second half, Shane Sutherland cut onto his left leg from the near side to hook a shot on target to test Hart at his post, which was comfortably saved.

Freshly minted substitute for East Fife, Thomas Collins, had a botched chance to test Mackay early into the half. The sub’s first touch was not tightly controlled enough to allow him to swivel and shoot in the box, but Hamilton managed to sting the palms of the keeper from just outside of the box with a low drive to his right.

The attacker had another pop with perhaps a little less power behind it five minutes later, swivelling to sweep a shot to the same side of Cammy’s goal, but he again had a comfortable save.

It wouldn’t be long before the only goal of the game arrived. Build up down the right hand side allowed Kai Kennedy to hook a through ball to Nicolson down the right flank, having played the 1-2, and the debutant’s firm cross into the box was just cleared out for a corner.

Cameron Harper whipped the set piece from the near side and Shane Sutherland rose highest to power home a firm header into the net – his second goal in two games.

Immediately after the goal, fresh legs were brought on for ICTFC, with Aaron Doran and Nikolay Todorov coming off for Miles Storey & Daniel MacKay.

New substitute Miles Storey was quick to test Hart for a second goal of the game, turning on the afterburners to beat the fullback to a long ball and hitting a low curling shot to the near post that was palmed away.

The boys in blue and red continued to add gloss to the scoreline with two big opportunities.

At the 73rd minute, Shane Sutherland chested down a high ball to set up Roddy MacGregor and the young midfielder made a mazy run towards the box but struggled to find a shooting angle he liked. When he did fire off an effort, it deflected back to Kai, who chipped the ball up to volley over the bar.

Next time, Shane Sutherland was again involved as he flicked a first time pass over the shoulder to his striker partner, Storey in space. The Englishman tried to open to angle to fire a shot at the near post but his effort grazed the wrong side of the net.

Late substitute, James Keatings slipped a cheeky pass to Storey, again taking advantage of the attacker’s pace. The defence waited a split second, expecting the offside call which didn’t come, leaving Miles to rush in one on one and pick his spot.

To his credit, Jordan Hart closed him down and stalled the striker enough to get reinforcements, with the striker only able to test Hart with a low drive that was blocked with his legs.

With the scoreline still only separated by one goal, East Fife came close to creating an equaliser as the game started to wind down. With five minutes of normal time left, Ross Davidson gave Cammy a scare from range, slapping a curling effort just inches from his goal. The ball hit the roof of the net as it left play.

Then with the whistle practically in referee Chris Graham’s lips, he was called to point to the spot at the 90th minute. Having managed to just about clear away the second successive corner from danger, Robbie Deas was adjudged to have tripped Jack Hamilton in the box on the stretch.

The player that was fouled stepped up to take it and his low sidefooted effort was met well by Cammy to save the points for the home team.