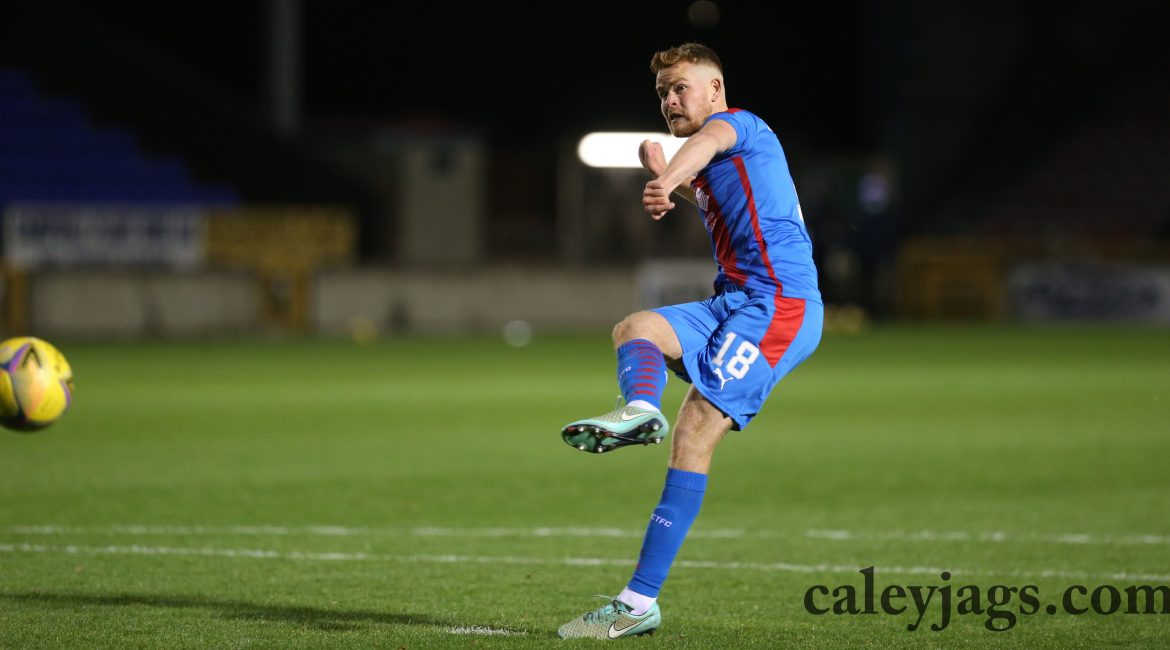 ICTFC got their first points on the board with a penalty shootout against Cowdenbeath in the League Cup.

With the scoreline goalless after the end of normal time, the two teams went straight to a penalty shootout to win a bonus point, on top of the customary one point.

All four penalties taken by the home team were scored and Cammy Mackay did his part by saving two of Cowdenbeath’s penalties. It finished 4-2 from the spot.

Daniel MacKay continued his starting run from the away game at Hearts, lining up on the right hand side and he was the first to test Sinclair in goal.

The tricky winger was prodded the ball in space right of centre, and managed to drill a shot from around 20 yards on target, but it was a good height for Sinclair to save.

Up next for the home team to test the defence was Miles Storey. James Keatings got the ball on a break, drifted into a pocket and played a cute through ball to Storey on the shoulder of his defender that just evaded the last ditch attempts of Jamie Todd. The Englishman moved the ball onto his right foot one on one with the keeper but couldn’t bend it around Sinclair into the far corner from close.

James Keatings continued to create opportunities to attack moments later. Again given time, the attacker looked to his left and threaded a through ball to Kevin McHattie on the run down the flank, who hit a great first time pass across goal. The cross skidded just inches short from a diving Caley Jag leg to convert.

Following that attack, Miles Storey was subbed off for Nikolay Todorov as a precautionary measure, having seemed to have picked up a slight knock.

23 minutes in, Roddy MacGregor was tripped around 20 yards from goal against Cowdenbeath. Keatings opted to try and whip it up and over but he couldn’t get the ball to dip down enough to challenge the keeper from so close to the goal.

Barely 30 seconds later, Daniel Mackay latched onto a ball on the shoulder of his marker near the edge of the box but was quickly closed down before he could dink the ball over Sinclair from close.

Cowdenbeath’s real threat came from a breakaway from a cleared corner to attack with acres of space to find. This move up the park ended with their captain, Kyle Miller bending a mid height cross from the right side that just missed a diving David Cox’ leg in the middle of the box. It was a missed opportunity for the away side.

ICT’s threat from set pieces asked questions of Cowdenbeath’s defence at the halfway point of the fist half. The first corner from Keatings was cleared out for another corner at the first attempt, but Daniel Mackay’s cross from the opposite side was met by McHattie running inside to out towards the near post. His flicked shot hit the side hit the wrong side of the netting through a bundle of bodies.

Just before the halftime break, some calls for a spot kick were made as Roddy MacGregor jinked into the box from the left hand side. The winger seemed to have received contact from a blue leg and went to ground, but referee David Beattie didn’t see enough to warrant a foul.

Cowdenbeath’s Oliver Hamilton was the first to come close to scoring from a tight angle in the second half. The attacker received the ball on the flanks while on the run and cut a low drive towards Mackay’s bottom corner, but it went just wide of the mark.

The hosts were next to curse their luck. Daniel Mackay burst past his fullback on the left flank and hit a low cross that evaded a large crowd in the box. Todorov arrived right in time to meet it on the run around the penalty spot but couldn’t get enough on the ball to coax it towards the near corner of the goal, having barely had any time to react.

As the Caley Jags kept circulating the ball, they tried harder to open the lock as minutes passed by. Sean Welsh tried curling a cross to the back post from the right hand side, but Roddy could only keep the ball in play near the goal line.

Just as he tried to hook a shot with his left foot from a tight angle, he lost his balance, but the referee did not deem it a foul by goalkeeper, Sinclair.

Welsh managed to force him into a save to his right from outside of the box 30 seconds later, and the defence did enough to only surrender a corner from Todorov’s follow up.

With almost ten minutes left of the game, ICT would see the ball come about a foot from breaking the deadlock. Nikolay Todorov evaded challenges on the run to play in Allardyce in space, who cut back to Roddy and who eventually found Daniel in the box to side foot the ball on target from close. This shot did beat the keeper but rolled slowly enough for the defence to recover and hook it away before it got to the line.

The game wouldn’t end without a controversial call. Nikolay Todorov managed to work his way inside of the box and looked from afar to be clattered by a defender as he went to ground. But instead of pointing to the spot, David Beattie reached into his pocket to book the striker.

With the game ending goalless, the teams shot towards the north stand from the spot to earn an extra point for the table.

Cowdenbeath won the coin flip but Graham Tayor’s shot on goal was palmed away by Cammy Mackay.

Todorov didn’t make that mistake, smashing the ball into the roof of the net down the middle. Cammy Mackay came close to again saving Hamilton’s shot and Cowdenbeath’s second, after he went the right way but the ball squirmed under his body to cross the line.

Robbie Deas, Harvey Swann and Sean Welsh consecutively converted their penalties comfortably in the corners of the goal, and Cammy saved the visitor’s 4th penalty, going to his left to firmly save Kris Renton’s effort.

This gave Scott Allardyce the honour of scoring the goal to seal the draw and the points for the home side, beating the keeper by shooting in the opposite corner to Sinclair.